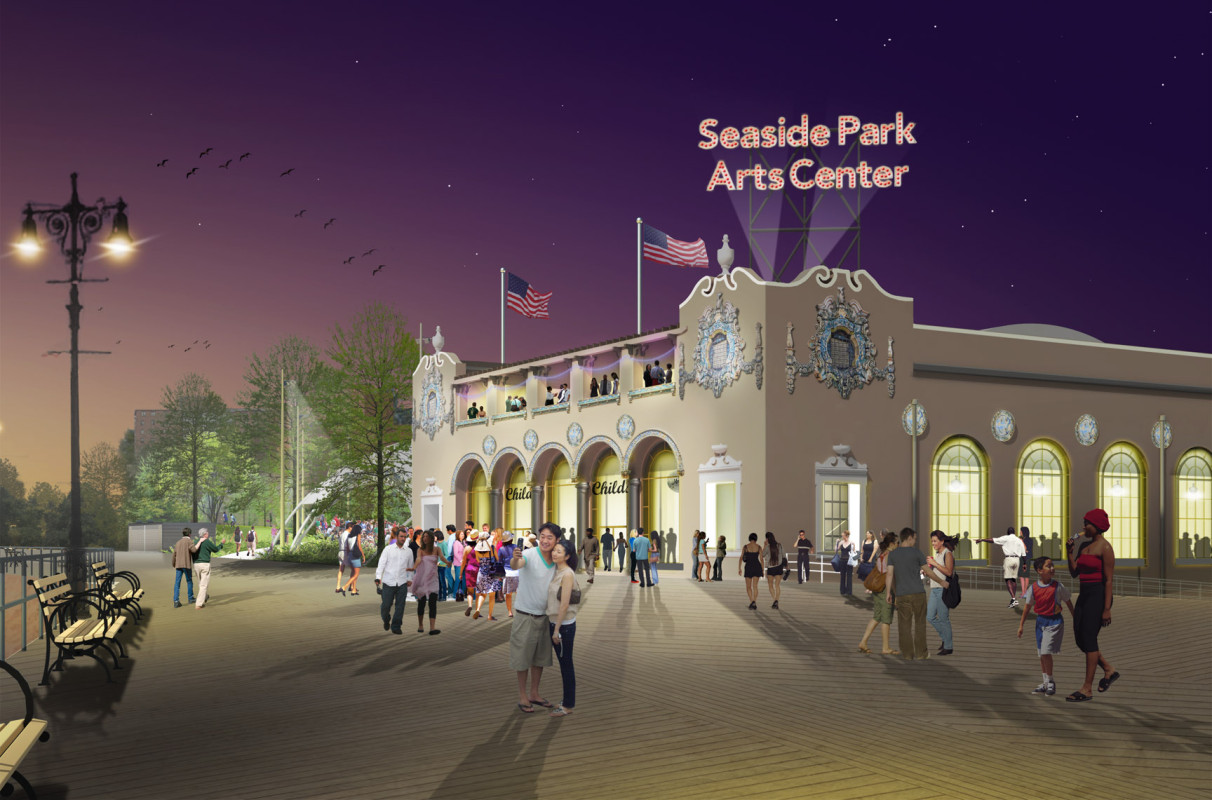 The Amphitheater at Coney Island Boardwalk, the cornerstone of the state-of-the-art Seaside Park and Community Arts Center developed by iStar, in partnership with Coney Island USA, will have its grand opening in July 2016 bringing New York City a new outdoor live entertainment venue.

The 5,000-seat covered open-air venue — the first of its kind in the Tri-State area — will host a mix of concerts, family shows, sports, comedy, and multicultural events, and become the new permanent home of the free Seaside Summer Concert Series.

The Amphitheater is located on Coney Island’s famed boardwalk and incorporates the Childs Building, built in 1923 as one of the first large-format stand-alone restaurants in the country.

The building is now designated as a New York City Landmark and is currently undergoing a full restoration after suffering decades of neglect.

The stage, which will be housed inside of the Childs Building with 50-foot tall doors opening to the Amphitheater during the summer, will also have the ability to serve the interior of the building during the winter months.

Live Nation, a leading live entertainment company, will hold a long-term lease to operate the Amphitheater at Coney Island Boardwalk, including booking and promoting a full summer season of live music, comedy and family entertainment.

The venue becomes the latest addition to the diverse Live Nation venue portfolio in the New York area, and will offer music and live entertainment fans even more variety as they head into Summer 2016.

Legends, which already operates at 36 Live Nation amphitheaters around the country, will provide hospitality services.

Brooklyn Sports & Entertainment (BSE) will sell naming rights and sponsorships, and support the branding and programming of the beachfront complex.

BSE oversees Barclays Center, the Brooklyn Nets, and the business operations of the New York Islanders, and will manage the new Nassau Veterans Memorial Coliseum, which is currently under renovation.

The City’s $60 million investment in the project has supported the property acquisition, adaptive reuse of the Childs Building, the development of the Amphitheater, and the creation of 40,000 square feet of publicly-accessible landscaped open space.

The development will be environmentally sustainable and is designed to become LEED Silver certified. This project is also targeting local hiring through the City’s HireNYC initiative with 180 construction jobs already created and an anticipated 150-200 part-time seasonal jobs and at least 12-15 full-time staff once the Amphitheater opens.

“Our vision for Coney Island is a neighborhood that preserves the past while building for the future, and that balances a vibrant amusement district with a growing residential community,” said NYCEDC President Maria Torres-Springer.

“The Amphitheater is ‎a key component of our investment in the neighborhood, and will soon be home to both world class concerts and community events.‎ We’re excited to be welcoming LiveNation, Legends and Brooklyn Sports and Entertainment to the project, and look forward to working with them and iStar to bring this exciting new space to the Coney Island community.”

“We hope the Amphitheater is a catalyst for a neighborhood resurgence,” said Julia Butler, Senior Vice President, iStar. “By working with partners such as Coney Island USA, Live Nation, Legends, BSE, and Seaside Summer Concert Series, we hope to create a venue that is vibrant and uniquely local.”

The Amphitheater is part of a series of investments made by the City of New York in the past decade to revitalize the amusement district and improve infrastructure to support the growth of the Coney Island neighborhood.