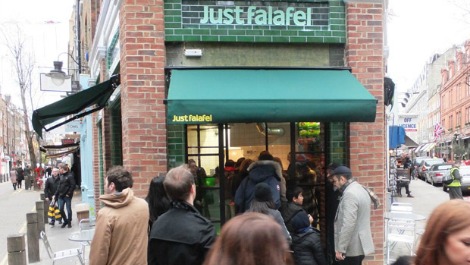 A Dubai-based fast-food chain is setting its sights on the U.S. retail market and expects to open 50 stores in New York City.

Just Falafel, a middle-eastern “fast casual” restaurant chain based in Dubai, announced earlier this year that the company was planning a massive American rollout, having already sold nearly 120 franchises, according to the company.

“Our goal is to become an authentic global aggregator of Mediterranean street food which fits with our brand’s core values of serving authentic, wholesome food with old-world flavors,” said a company spokesperson in an e-mail.

“Our handmade artisanal offerings will be locally and ethically sourced where possible using the finest ingredients.”

Founded in 2007, the company has rapidly grown from one small restaurant in Abu Dhabi to close to 50 stores nine countries, with agreements for close to 900 franchises in 18 different nations.

The company said it will “almost double” the number of restaurants globally this year. 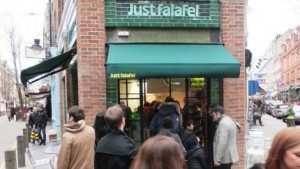 Earlier this month, Just Falafel opened its first US store in the Bay Area and is set to open seven more by year’s end in Kentucky, New Jersey, Houston, and NYC.

Established Mediterranean chains Maoz and Chickpea, which have six and 11 locations in NYC, respectively, seem to make up the prime competition to Just Falafel, not to mention the ubiquitous street corner food carts that sell Mediterranean fare like falafels and gyros.

Just Falafel isn’t the only Arab retailer looking to make a splash in NYC — Qatar-based luxury fashion retailer Qela will be debuting on Madison Avenue this year.

According to the company’s creative agency, UXUS, Qela will sell leather goods, fine jewelry and women’s fashion, designed and crafted in Qatar.

But they are among only a few Middle Eastern retailers with global expansion plans.

“Mostly, in the affluent areas of the Middle East, the UAE, for example, they’re seeking the European luxury brands that are all over the world,” said Faith Consolo, chair of the retail division of Douglas Elliman. “Local stores are still expanding at home, moving from the UAE to Saudi Arabia for example. They’re still building huge malls in the area.”

Just Falafel geared up for its international expansion by employing “experienced professionals” of the fast food market in the US and working with a broker in NYC — though they have remained tight-lipped about who and where the locations in the city will be.

“Exact locations are under negotiation at the moment, but the restaurants should become a fixture of the five boroughs and beyond in New Jersey,” said a spokesperson.

The company is looking at street level retail, malls, universities, and strip malls as possible locations for the franchises, which will range anywhere from 165 s/f to 500 s/f.

Two locations in New Jersey — in Edison and North Brunswick – have been “secured” and the company is “close” to securing sites in NYC.

“Our love and passion for Mediterranean and vegetarian food is growing and we expect this cuisine to prosper in highly competitive markets such as the US,” said Fadi Malas, CEO of Just Falafel, in a statement.

“We have sold nearly 19 million pieces of falafel since the Just Falafel brand started and with chickpeas being the main ingredients we expect falafel, like hummus to become a household favorite when looking for healthy food.”