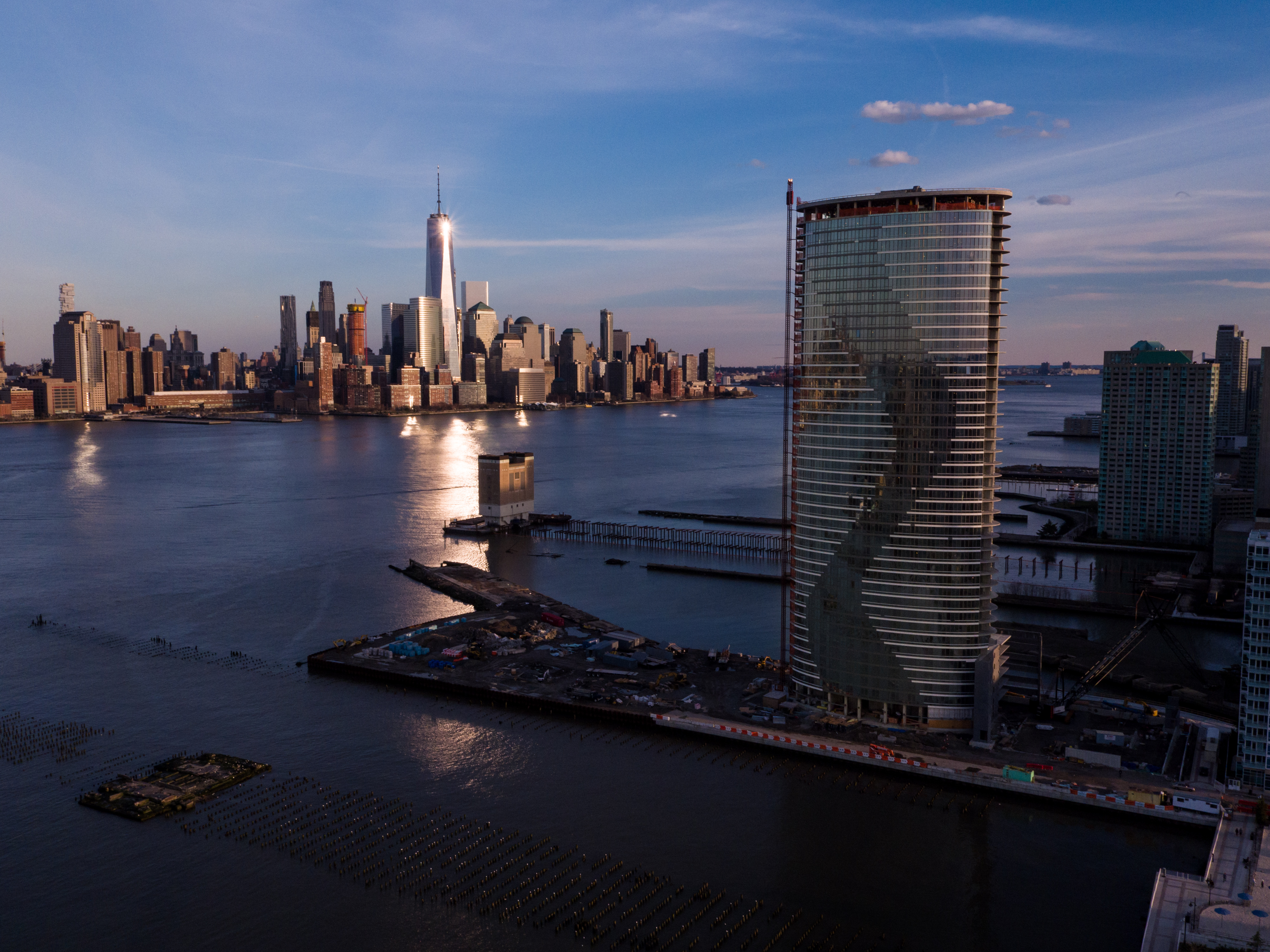 Between the Hudson River lapping up against the pier, the gentle tink-tink-tink of construction echoing through the surrounding neighborhood and the building’s undulating streaks of blue, the jaunt from the Hoboken train station to Ellipse feels like the preamble to a seaward voyage.

From the tower’s upper floor, the narrow strip of land below all but disappears, leaving water-lined vistas that sail clear into Tribeca, FiDi and everywhere in between.

Named for its elliptical footprint, the Arquitectonica-designed Ellipse stands 41 stories tall atop a peninsula the juts into the river at the end of 14th Street.

Completed last year, it consists of 381 apartments, including penthouse five, the most expensive rental in the city at $10,995 a month for the 2,300 s/f of space.

Leasing began last April and the building opened in August. The only unit left unspoken for is penthouse two, a sprawling, 2,024 s/f abode with four bedrooms and three-and-a-half bathrooms.

Unlike the other four penthouses, No. 2’s wraparound balcony doesn’t have a waterfront view, meaning occupants must peer through floor-to-ceiling windows to get a glimpse of the George Washington Bridge to the north or the Verrazano-Narrows to the south.

Instead, the terrace overlooks the parks, shopping centers and sprouting towers of the Newport district, a swath of land that could have easily been dubbed LeFrak City had the moniker not been given to a cluster of apartment complexes in Queens.

Non-penthouse apartments range in size from studios to three-bedrooms and in price from $2,600 to $5,300. Each unit is equipped with Whirlpool appliances, including a washer and dryer. Kitchens are punctuated by quartz countertops and bathrooms are clad in vertical subway tiles. Large windows allow natural light to flow in and picturesque sightlines can be found in all apartments on the north or east sides of the building, regardless of floor.

“The best view of Manhattan comes from outside it, not within it,” Richard Wernick, LeFrak’s head of residential leasing, said.

The LeFrak Organization put down roots in Jersey City in the mid-1980s. Since then, it has led the revitalization of the area’s waterfront, cleansing the area of its post-industrial scars and replacing them with modern office towers, hotels and a transit-connected mall.

With the addition of Ellipse, it now has a residential portfolio with 5,000 units spread throughout 15 properties, though Wernick said the company’s latest project was more than another tree in a forest of glass and steel.

“The building itself stands out,” he said. “A lot of people can build a tall building, but we put a lot of thought into this, with the architecture, with the apartment layouts and everything else.”

The design isn’t the only modern element at Ellipse. The building is wired with free Wi-Fi and outfitted with a third-floor business center that includes a glass-enclosed meeting room for the work-from-home crowd. The fifth-floor game room has a massive, wall-mounted TV for video games and the sixth-floor lounge has an electric fireplace that emits heat from a digital screen.

A deck can also be found on the sixth floor with a swimming pool, a kiddie pool, cabanas, barbeques and a fire pit with stadium seating. One side of the deck provides views of Lower Manhattan while the opposite end overlooks Newport Green, a park complete with a great lawn, a playground and the Hudson River’s only man-made beach — although a fence at the end of the sandpit prevents visitors from frolicking into the channel.

During the winter, an ice skating rink is set up a stones through from the Ellipse and walking paths connect the building to downtown districts of Jersey City and Hoboken. There’s also a modest parking garage for those who prefer to drive.

LeFrak’s buildings have drawn tenants of all sorts, including a variety of drinking and dining establishments that bring with them the promise of a thriving nightlife scene, though many A-list venues in Manhattan are still just a PATH-ride away.

It recently began marketing luxury units at 75 Park Lane and the Shore House, both of which are down the street from Ellipse.

Wenick said LeFrak is not concerned about Strategic Capital competing on its turf.

“It’s like owning a restaurant, it’s always better when more restaurants open up around you because it turns your area into a dining destination,” he said.

“When other buildings are successful, it helps because we’ve got a big footprint in the area.”