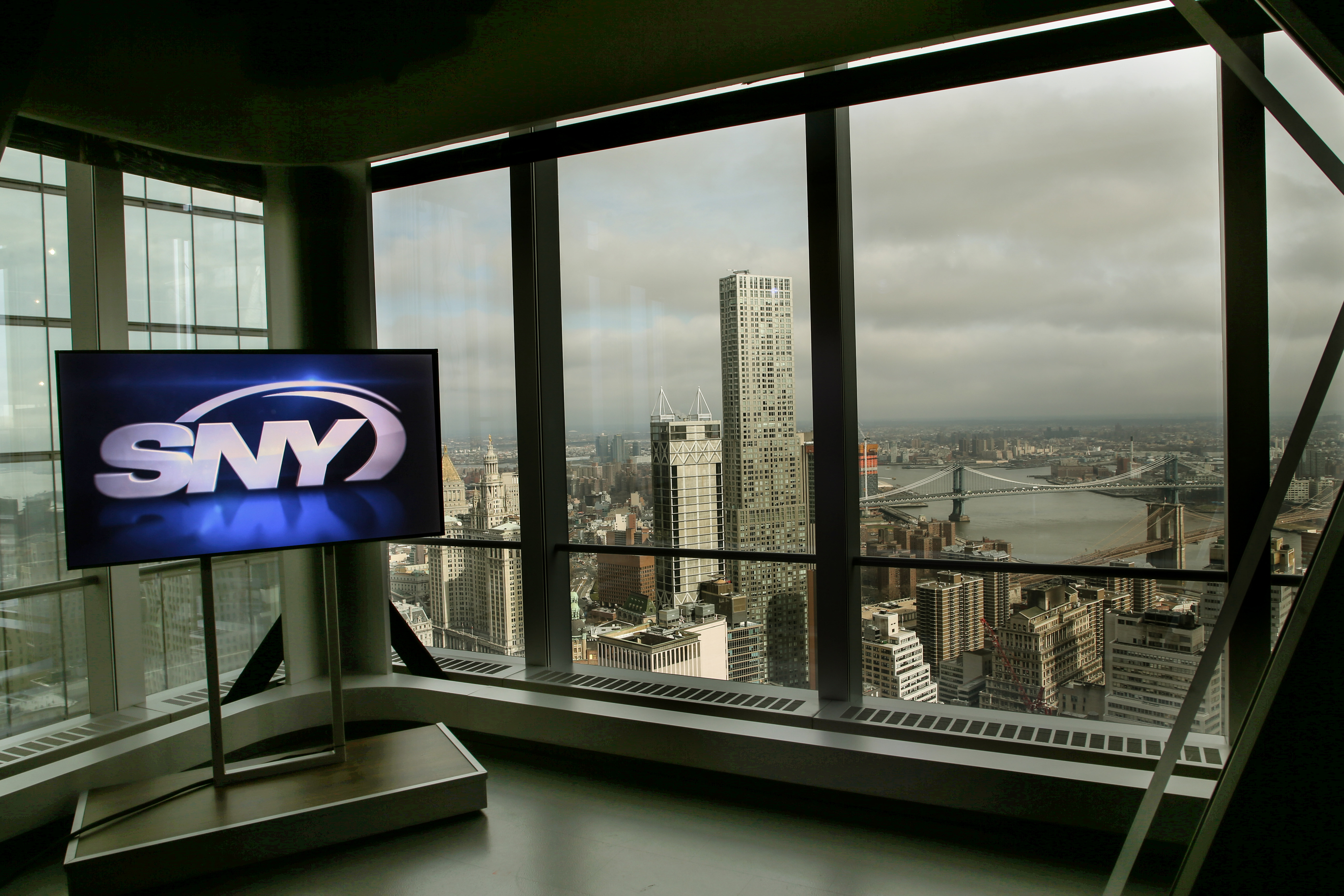 They started at the bottom, now they’re here — 49 stories up in the sky.

When SportsNet New York launched a dozen years ago, it was a ground floor tenant in the Time-Life Building, broadcasting from a CNN hand-me-down studio and squirreling away most of its staff in below-grade offices.

Now, it has a hand-crafted space of its own design some 650 feet above ground at 4 World Trade Center.

Sunlight and a sprawling break room would have been enough to distinguish the SNY’s new home from its previous one, which was built 60 years ago, but the network needed more than a cosmetic makeover for its modern headquarters. With thousands of pounds of equipment, broadcast-quality lighting requirements and ravenous demand for energy, it would have to test the limits of a building that marketed itself on flexibility.

Broadcast studios are rarely built in the middle of skyscrapers, Blanding said. Typically, they’re found on either the top or bottom of a building where higher ceilings can accommodate intricate lighting systems without encroaching on shots or singeing the faces of the talent. Absent a double-high space, the alternative often is to rent the space above and cut through the floor slab.

However, with cameras, switchboards, editing bays and the other hefty equipment loaded onto the 50th floor, SNY had to lease the 49th as well to reinforce the girders, meaning a taller studio would require a third unit. “All of a sudden your rentable floor space just balloons,” Blanding explained.

Thanks to a 13-foot ceiling height and compact, LED lighting, SNY fit three studios on the 50th floor without going outside its existing envelop.

Once height was dealt with, the question shifted to width. Most office buildings have 19 feet between support columns, which is hardly enough space for a set and cameras. Columns can be moved but it’s a tricky process, Blanding said, not to mention expensive.

Inside 4 World Trade, that was also a non-issue: the columns were between 40 and 45 feet apart.

“This was an idea sort of place to build a studio, shocking as it may seem,” Blanding said. “It gave us wide open space so when we got the studios set up, we could really do a lot with them.”

SNY signed a long-term lease at 4 World Trade center in spring of 2016 and was able to move in after a year-long build out in March 2017. It had to move roughly 8,000 pieces of equipment — much of it brand new — and install a mile-and-a-half worth of cable throughout two floors.

The network joins other tenants such as PadillaCRT, a public relations and communications company, the accounting firm Dixon, Hughes, Goodman, LLP, Spotify, and Syntactx, a pharmaceutical and medical device research company.

Silverstein Properties is developing 4 World Trade as well as the rest of the World Trade Center site, revitalizing the heart of the Financial District. Architect Fumihiko Maki designed the building.

“It’s just such a transformative area,” SNY president Steve Raab said. “On some level, there’s pride in what has been developed in this area and people are gravitating to it. I’m proud that SNY is down here and is part of it.”

Each studio is named after a number retired by the Mets, SNY’s flagship team. The two 1,700 s/f studios are 41 for pitcher Tom Seaver and 31 for catcher Mike Piazza while the 400 s/f corner space is called Studio 42 in honor of Jackie Robinson, who didn’t play for the Mets but has his number retired by every MLB franchise.

“It’s easy when the team only has two Hall of Famers,” SNY senior vice president of operations Bill Clarke said while touring the facility, wearing a vintage Philadelphia Eagles jersey pulled over his dress shirt.

Clarke said the key principle in designing the studios at 4 World Trade was flexibility; being able to build multiple sets in the same studio and being able to easily transform the backdrop to match the time of day.

SNY also makes use of automated cameras to save space. In Studio 42 the lone camera is on a track that curves around the room so it can be controlled by remotely.

To accommodate robotic cameras in the larger studios the company opted to install “super flat” floors, which includes a more scrupulous cement pouring process to achieve a mirror-smooth finish.

“Not a lot of studios do that and we had to take a couple passes at it,” Clarke said. “As with anything, the degree of difficulty rises as you go higher.”

To capitalize on its vantage point, SNY also has a handful of connection panels throughout its space so it can mount robotic cameras to the outside the building for live b-roll shots.

With their modern amenities and appearance, Clarke said both the studios and the offices — most of which are housed on the 49th floor — have been used as filming locations for other networks, such as HBO and CBS, as well as a movie starring Jennifer Lopez.
He hopes to make the space available to other projects and possibly partner with other programs that would use the space on a regular basis.

SNY has roughly 140 full-time employees and freelancers who make use of the space for chopping up footage in one of the space’s 14 editing bays or reporting in the open-floor newsroom.

Also, the studios and server room require constant air conditioning and many of its broadcasts are transmitted online as well on air, Blanding said, meaning the company has significantly greater electrical needs than the average office.

To counteract this, SNY has installed its own 150-ton chiller system on the roof of the 74-story building and a bank of batteries inside that could allow the operation to continue for up to half an hour after a power outage.