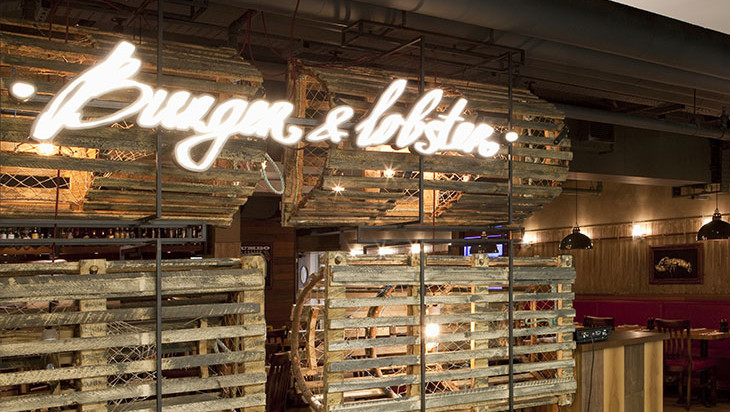 The Durst Organization and Burger & Lobster announced that the London-based restaurant group signed a 15-year lease for 8,900 s/f on the ground, second and basement levels of the Stephen Sondheim Theatre space in One Bryant Park, at 123 West 43rd Street.

The space will house the second outpost in New York City (and in the second in the U.S.) of the novel eponymous concept which offers just three items at one price — hamburger, lobster roll and whole lobster, each served with fries and salad, for $20. The 150-seat restaurant is slated to open in the fall of 2016.

The décor of new Bryant Park / Times Square restaurant, with access from both 43rd and 42nd Streets, will be the result of a collaborative effort by UK’s Andrew Harwood Design and the New York based Michael Zenreich architects.

They will incorporate such signature Burger & Lobster decorative elements as the liberal use of a variety of woods, high back red booths and lobster traps, while highlighting the space’s physical characteristics with a grand staircase connecting the ground floor entrance with the dining room, where a giant whimsical lobster sculpture will hang from the 24 foot high ceiling and where two stories of mullioned windows will overlook 43rd Street.

“It’s very exciting for us to open our second New York City — and U.S. — location in such a vibrant neighborhood, where we’re taking advantage of a truly unique space that has inspired a very compelling design,” said Vladimir Borodin, the Burger & Lobster operating partner who is in charge of the expansion to the U.S.

“The fact that we’ll be in a theater is especially exciting to me having grown-up in a theatrical family. I’m looking forward to Burger & Lobster becoming an integral part of New York’s dynamic the theater community.”

“We are delighted Burger & Lobster chose One Bryant Park for its second location in the United States,” said Jonathan (Jody) Durst, President of The Durst Organization. “The historical theatre space will offer Burger & Lobster’s customers a unique dining experience in Midtown Manhattan.”

The theater, formerly known as Henry Miller’s Theatre, was restored and reconstructed during the construction of One Bryant Park.

The Neo-Georgian landmarked façade of the original 1918 Allen, Ingalls & Hoffman-designed theatre was preserved and restored. The theater is operated by Roundabout Theatre Company.

Owners cash in on Soho office building with $25M refi’