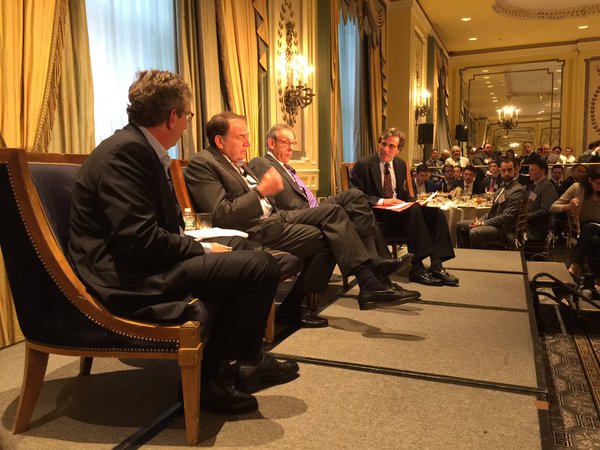 Bill Rudin, vice chairman and CEO of, Rudin Management Company, Inc. said the market is following a trend towards urbanism.

“If you look and see the kind of jobs we’re attracting, with big corporations today, it’s all about technology,” continued Rudin. “The future of New York is about technology.

“The people that we’re attracting to New York, and the skills that they have, and the wages they’re being paid, they can afford a lot more,” he said suggesting that the demand is present to sustain the heightening costs of the market. “You’re going to have a lot of gentrification going forward, within the city.”

“What do you do when you have that second kid and you can’t pay for private school?” asked Blumenthal.

“You have to work hard,” responded Rudin. “The wife is working, she doesn’t want to move to the suburbs and not have the opportunity to work. So she’s now continuing to work. She’s contributing her paycheck to the equation. So they can afford it — some can’t, obviously some will make that decision, some will decide they don’t want to work — but the majority of women today want to continue their jobs.”

Blumenthal pressed on. “I think you’d need three working women to afford your apartments in St. Vincent’s,” he said before receiving a substantial amount of laughter from the audience.

Rudin pointed out that the converted hospital-turned luxury residential building is 90 percent sold and, therefore, evidence of a robust market for such properties, despite the high prices.

Apartments a what’s now called The Greenwich Lane range from $2 to $45 million.

According to Rudin, 70 percent of the buyers at St. Vincent’s are New York locals and families.

Aside from that brief exchange, the panel found itself mainly in agreement. Stephen M. Ross, chairman and founder of Related Companies and Richard LeFrak, chairman and CEO of LeFrak, joined Rudin on the panel.

The trio discussed the need for improved transportation, within the city in order to maintain a well-rounded workforce. The need for an adequate supply of truly affordable housing was also debated amongst the group.

LeFrak said that capital will be needed in order to counter the dearth of supply.

“There seems to be a real malaise in the country today in terms of what’s really occurring. The perception is that there’s only one issue in New York and that’s about affordable housing. “I think that’s important, but we have to be more than just a one trick pony,” he said, reinforcing the shared sentiment on the panel that New York has more than one obstacle to overcome in order to maintain the strength it currently has.

“But I’m still very encouraged about New York City,” concluded Ross. “I think it’s a city that will continue to grow.”