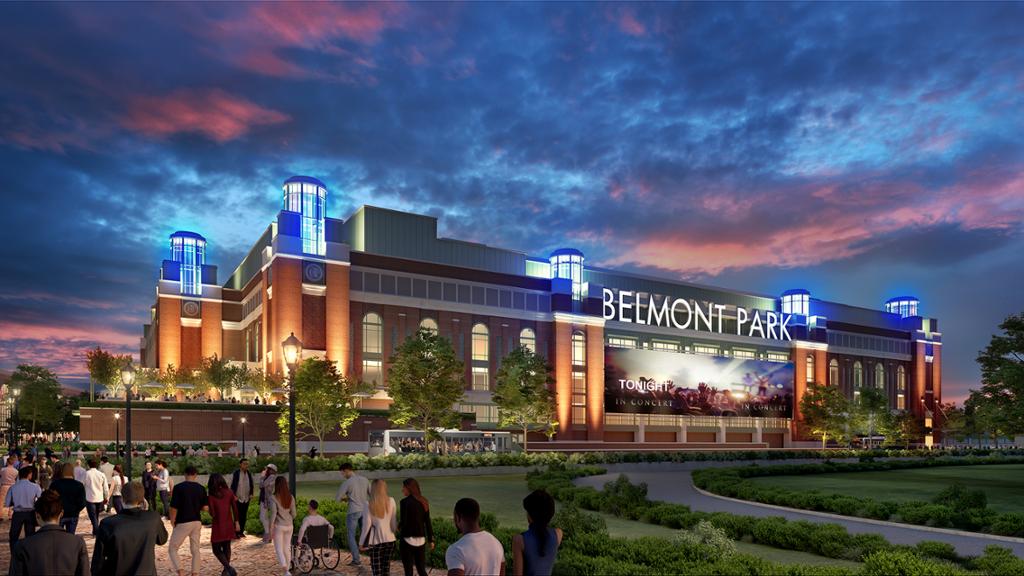 Governor Andrew M. Cuomo today announced the “topping off” of the UBS Arena, the new home of the New York Islanders at Belmont Park on Long Island.

Empire State Development Board Chair Steven M. Cohen and Acting Commissioner Eric Gertler joined National Hockey League Commissioner Gary Bettman and Islanders co-owner Jon Ledecky to place the highest steel beam atop the new arena, marking a major construction milestone for the project, which remains on schedule for opening ahead of the 2021-2022 National Hockey League season despite disruption caused by the COVID-19 pandemic.

“The Islanders are Long Island’s team and they deserve a permanent home here among their fans. Today, we are taking another major step toward making that a reality, while building a brighter future for all New Yorkers,” Governor Cuomo said.

“In New York, we have repeatedly shown that we can deliver big projects despite the odds — and in the face of delays related to the coronavirus pandemic, the Belmont team stepped up to keep this transformational project on schedule. This arena will boost our economy and is evidence — in steel and concrete — that New York will build back better from this crisis.”

The UBS Arena at Belmont Park will be the home of the New York Islanders starting with the 2021-2022 season and is the centerpiece of the $1.3 billion Belmont Park Redevelopment Project, which also includes a hotel, office space, and retail village. UBS signed a 20-year arena naming rights agreement for the arena, developed in partnership with Oak View Group, the New York Islanders, and Sterling Project Development.

In conjunction with the project, the MTA will construct a new LIRR station at Elmont — the first new, full-time LIRR station built in decades.
The majority of the station’s cost will be privately funded by the arena developer.

Construction on the arena was delayed for two months when COVID-19 peaked in New York and non-essential businesses were closed, but is now back on schedule.

Construction is projected to create 10,000 jobs and generate $2.7 billion in economic activity.

Once complete, the project is expected to sustain 3,200 full-time jobs and produce $858 million in annual economic activity while generating tens of millions of dollars in new annual tax revenue.

“Today marks another significant step on the journey to the Islanders’ home opener of the 2021-22 season,” NHL Commissioner Gary Bettman said.

“No one – particularly the loyal fans of the Islanders – can wait until the team skates onto the ice of the spectacular UBS Arena. In the meantime, we marvel at the vision of Islanders owners Scott Malkin and Jon Ledecky, the Oak View Group and Governor Cuomo, and the way they’ve worked together to turn that vision into reality – even remaining on schedule during these turbulent times.”

Building and Construction Trades Council of Greater New York President Gary LaBarbera said, “Today is a major step forward in transforming Belmont Park into a world-class hospitality and sports facility. This announcement is made possible by the tireless work of the union building trades members who, despite a global pandemic, show up every day to get the job done.

“New York will come back stronger than ever because Governor Cuomo understands that large-scale infrastructure projects drive job creation and economic growth for decades to come.”