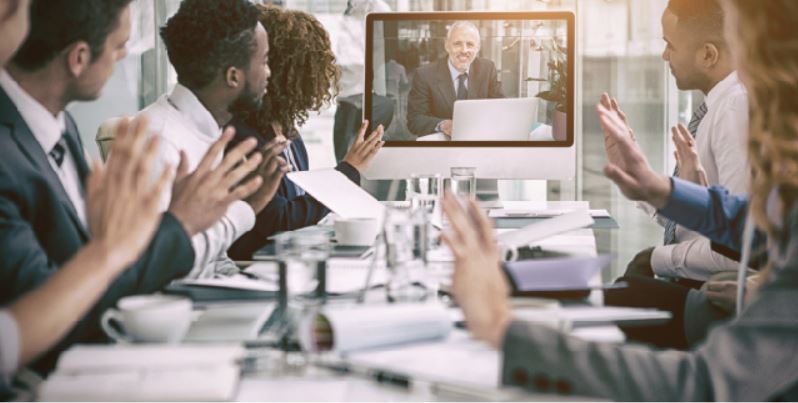 If there is one indisputable adage in the world of commercial real estate digital marketing, it is that “Content is King.”

Yet, in the constantly-evolving world of social media platforms, finding the most efficient and effective vehicles to disseminate that content to increase brand presence and drive business is an ongoing challenge for CRE marketers — from single broker shops to the world’s largest CRE firms.

“I really do think that content is still king with all things marketing, and it’s really the heart and soul of digital marketing as a whole,” said Joseph Buechel, digital marketing manager for Global Corporate Services at Newmark Knight Frank (NKF).

“What we want to do is create expansive libraries of content that can be leveraged via multiple digital platforms and digital media. Whether it’s programmatic advertising, social media, a blog, video, or podcasts, we really want to broaden the reach of our content.”

Buechel said that the most effective channels that NKF employs are programmatic advertising (which automates the decision-making process of media buying by targeting specific audiences and demographics), third party marketing automation tools (like Marketo and HubSpot), social media (“a big component for us and still growing”), and video (“huge”).

“More is better with delivery systems and expanding your reach to anywhere and everywhere it could be applicable is best,” said Buechel. “But for NKF Global Corporate Services, LinkedIn is probably our strongest tool, followed closely by Twitter.”

The case for LinkedIn as the primary content marketing delivery system is compelling.

As of early 2019, LinkedIn had amassed over 610 million users, 260 million of which are monthly active users — with 44 percent of those monthly users accessing it daily.

According to LinkedIn’s own research, 80 percent of online business to business leads come from LinkedIn, versus 13 percent on Twitter and seven percent on Facebook. Interestingly — and quite notably — 46 percent of social traffic to corporate websites comes from LinkedIn.


As a broker with a local and national (Netflix, Citi, Shell Oil) client base, the videos give him a platform to showcase his expertise on a hyper-local basis as well as on a national level.

Following a property tax revaluation in Mecklenburg County — of which Charlotte is the county seat — Hughes produced a video about the impact the revaluation was likely to have on property owners and tenants, garnering over 1,700 views.

More recently, he weighed in on the failed Amazon bid to establish a second headquarters in Queens, N.Y. and drew 3,000 views.

“To me, those were ideal topics,” said Hughes, “because they both dealt with subjects that people wanted to learn about while simultaneously providing me with an opportunity to be a credible expert in real estate.”

Hughes uses LinkedIn’s “native” video application — introduced in late 2017 — which allows users to upload video directly to the platform. This method nets substantially more views than the same video shared via a YouTube link, as LinkedIn heavily weights native videos in their algorithms.

Video earns an average of three times the engagement of text posts and is five times more likely than other content to start a conversation among LinkedIn members, according to the platform’s marketing materials.

“LinkedIn is definitely my go-to outlet,” said Hughes. “Understanding the algorithm for LinkedIn and how it [both] works and disseminates your message is very important, because you can have the best content in the world and if people don’t ‘like’ it or they don’t comment on it, it will only unlock a limited amount of people at a stretch.”

Video is also a major component of the digital marketing strategy for Austin-based Aquila Commercial. Aquila produces segments featuring brokers providing in-depth market information as well as short pieces on topics like, “How Much Office Space Do I Need for My Business?”
The videos are then distributed through the firm’s and broker’s individual Twitter, LinkedIn, and Facebook accounts, as well as via a subscribed email blast. But video is just one element of a multi-pronged effort to position Aquila as the “Wikipedia of commercial real estate” in the Austin market.

Another is their immensely popular quarterly market reports, which typically generate 3,000 downloads, according to Kristi Svec Simmons, SIOR, partner at the firm.

“We took the approach that we want to be the authority on commercial real estate, and so our strategy has been to answer our customer’s questions, which we’ve been systematically doing in the form of blog posts and videos,” said Simmons.

It’s all part of an intensified content marketing campaign that began in April of 2016, when Aquila was attracting around 1,800 visitors per month. In March 2019, the website drew 30,000 visitors.

Aquila then converts those visits into actionable leads by utilizing HubSpot’s “radar/research/revenue” lead-scoring system, which assigns values to those leads to help broker teams discern levels of interest for each.

The Aquila marketing team — led by Kendall Guin — is diligent in keeping up with digital marketing trends, and recently began working with a local influencer on a development project.

They shot a video with a foodie influencer that focuses not on the office space itself, but on the “cool factor” of the restaurant/retail offerings of the surrounding area.

“I think we’re going to start to see influencers become a big part of real estate marketing,” said Guin. “These people are trusted, they have large networks, and while we don’t think one of their 100,000 followers will be leasing our building, we do think they’ll provide a credibility and authenticity for the area that is vital to an overall marketing strategy.”

That premise was tested last fall by Boston Properties, which sought to bolster retail traffic at the repositioned Prudential Center in Boston by promoting Aperitivo, a kind of “Happy Hour 2.0” at the property.

Boston Properties teamed with VizSense — a provider of influencer intelligence — to engineer a campaign utilizing 19 micro-influencers. The result? In the first three days, 30-plus stories were posted on Instagram, reaching 468,418 people, with 16,338 likes, 1,138 comments — and 7,164 clicks to Eataly’s Aperitivo site.

Not all of the successful digital marketing concepts are cutting edge.
John Culbertson, SIOR, partner at Cardinal Real Estate Partners in Charlotte, N.C. has been doing content marketing for over a decade, consistently posting to his “Better Way” blog on topics from CRE to the benefits of procrastination — with consistent results.

“If you had asked me a year ago, I would have said that when I write this content I don’t expect decision-makers to read it, because people over the age of 50 aren’t reading what’s on social media, but people who influence the decision makers will,” said Culbertson. “But recently, I’ve come to realize that has changed, and it will change a whole lot more going forward.”

Jim Klein, SIOR, owner of Klein Commercial Real Estate in Los Angeles, utilizes a number of systems to deliver his content, including email blasts and a consistently updated blog.

He began by using Salesforce to do his email campaigns, but after receiving backlash from clients over the proliferation of “click marketing,” he developed his own platform.

He created it using Drupal, a free and open-source content management framework that allows him to more specifically target his newsletters and property offerings.

In addition to being a prolific blogger, Klein reports that he is enjoying great success with “meme marketing.” He has contracted an artist to create a whole series maps of industrial areas as well as images of build-to-suits.
“A lot of times, all I do is just send one image, and sometimes they go viral,” said Klein.

In addition to the digital, he’s gone back to “hard” mail. “I take those images and I create postcards and send them out — in conjunction with the digital,” he said. “It sounds backwards, but that way I’m creating even more impressions.”

Somewhat surprisingly, Klein’s direct mail strategy was echoed by every subject interviewed. And while not even remotely digital, “snail mail” serves as a valuable adjunct to digital marketing strategies.

“You get about 10,000 emails a day but you only get a few pieces of mail, so when you do get a piece of mail, you’re paying attention to it,” said Simmons, who added that client response to direct mail campaigns has been strong.

On the other end of the spectrum, there’s artificial intelligence (AI), clearly the next frontier of digital marketing.

A 2018 survey by Salesforce found that 51 percent of marketers are already using AI, and 27 percent more were planning on incorporating the technology in 2019.


But Maura Hudson, 15-year CRE marketing veteran and marketing director with NKF in Los Angeles, said that it’s currently automation (software designed to automate repetitive tasks such as emails, social media, and other website actions), not AI, that is “winning the day” in digital marketing.

“Automation is going to quickly turn into more machine learning and AI as the data is further centralized and predictable,” she asserted. “I believe AI will continue improving in 2019 and beyond, and it will become ingrained in a lot of the automation tools that already exist.”

One of the great things about digital marketing, said Hudson, is that what was once largely anecdotal in terms of measuring effectiveness, is now quantifiable.

“We can instantly see the results in terms of clicks, impressions, conversions, and views, and we need that feedback in order to be able to determine where we should be investing our resources.”

Proptech – What Is It And What Does It Mean For Real Estate?

The current state of LIBOR transition in commercial real estate