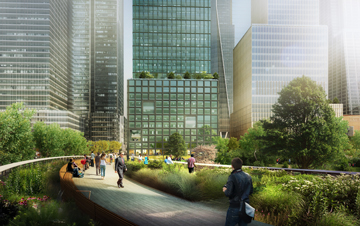 Hudson Yards announced that global law firm Cooley LLP has signed a deal to relocate its New York headquarters to 55 Hudson Yards, leasing 130,000 s/f across five floors near the top of the building.

Jay Cross, president of Related Hudson Yards said, “The unprecedented commercial leasing effort at Hudson Yards has attracted over 6.4 million square feet of occupancy by some of the world’s leading businesses, and we are thrilled to welcome Cooley to the neighborhood.

“Both Cooley and its clients are well-regarded as forward-thinking and innovative, and their new park-front New York City headquarters, in this amenity-rich neighborhood, is an ideal fit for their customers and their culture, employees and future talent.”

Positioned at the intersection of Hudson Yards, the High Line and Hudson Park & Boulevard, it is one of the few office buildings in the city that opens directly onto a park.

It also sits adjacent to a No. 7 Subway station, which connects to nearly every other major subway line, as well as Grand Central Station.

Hudson Yards will include more than 18 million square feet of commercial and residential space, more than 100 shops and restaurants, 4,000 residences, a cultural space, 14-acres of public open space, a 750-seat school and 200-room Equinox hotel.