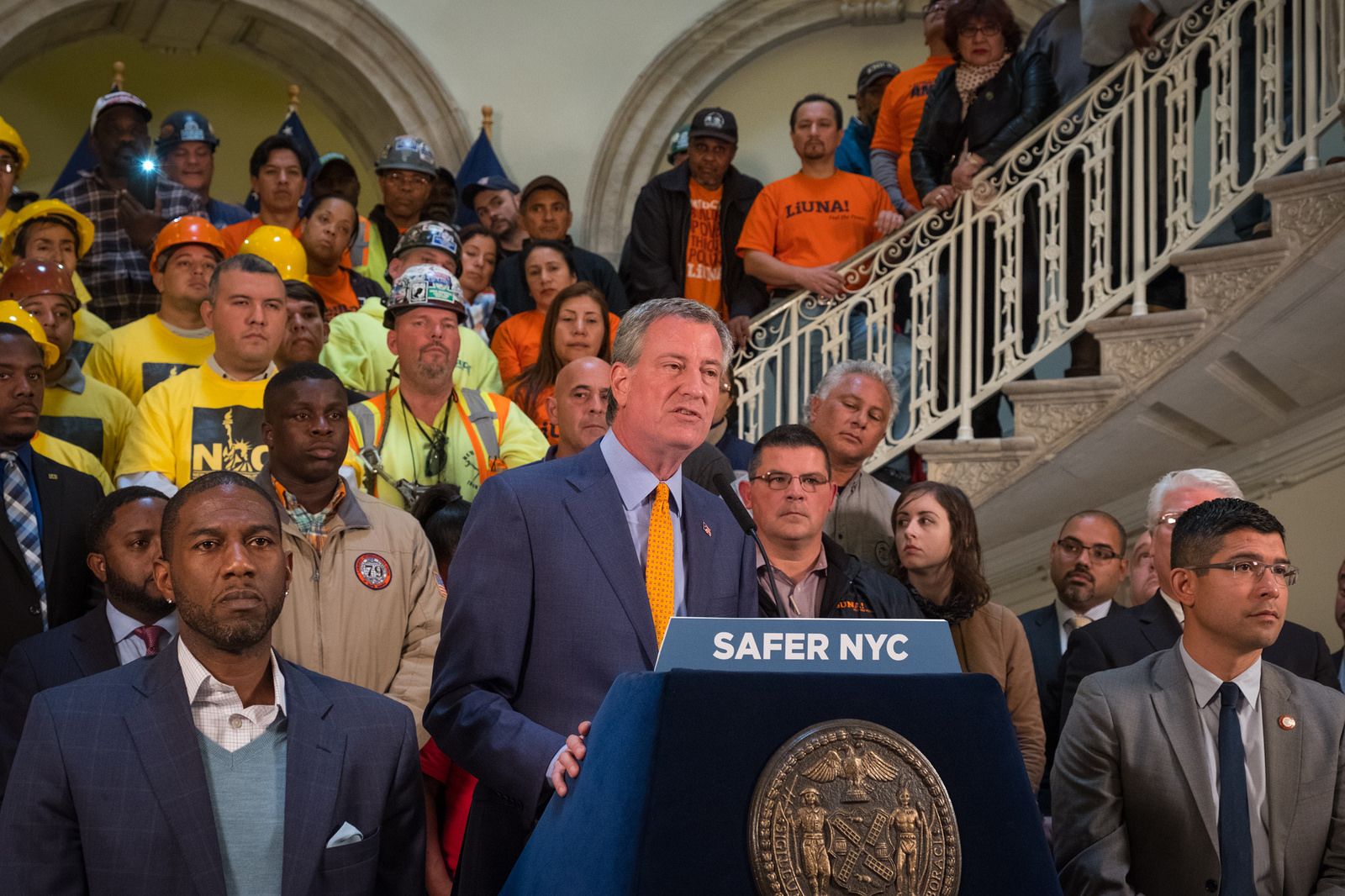 Mayor Bill de Blasio signed the Intro 1447-C bill, the controversial safety construction bill that had support from several trade organizations but was also criticized by some as something that would take away jobs from minority construction workers and contractors.

On Monday, de Blasio officially signed into law the bill that was introduced and advocated for by City Council member Jumaane Williams, who is the deputy leader and chair of the Council’s Housing and Buildings Committee, and co-sponsored by Council member Carlos Menchaca.

The law will mandate that workers have a cumulative total of 40-55 hours of training, phased in over time. The first ten hours must be completed by March of 2018, thirty hours by December 1 of that year, and 40-55 within five months of that date. Extensions can be granted to the second and third milestone if necessary.

After a number of construction worker deaths in the last few years, the industry called for more safety training on job sites, which led to the creation of the bill. Supporters of the bill include Greater New York LECET, the Building and Construction Trades Council of Greater New York, and the New York City Central Labor Council, AFL-CIO.

The city created a task force to help facilitate the training and determine its content, in conjunction with the Department of Buildings.

Before the Council voted on the bill last month, REBNY president John Banks, in his weekly REBNY Watch column, said that the bill failed to address key concerns.

“The first concern is simple: does New York City have the adequate capacity to train up to 120,000 non-union construction workers? The answer to this question is just a simple — no,” REBNY President John Banks said in his weekly REBNY Watch column.

“Many of the up to 120,000 workers will be left at risk of not getting a contractor to pay for their training. With no sponsorship and insufficient public funding, these workers will need to pay for training out of their own pockets in order to keep working.”

In a speech before the vote last month, Williams said that the legislation “addressed all the issues” brought up by both union and nonunion workers. He also strongly criticized the Real Estate Board of New York, which was pushing for the bill’s demise. Williams called the organization “disreputable” and “abhorrent.”

Mayor Bill de Blasio has said that the safety of construction workers is a top priority for his administration. In 2016, the city’s Department of Buildings quadrupled fines for the most common safety lapses, and later increased safety supervision at most major projects. And it looked as though there was a consensus on improving worker safety.

“I commend Mayor de Blasio for taking a real stand to protect New York City’s construction workers,” said Vincent Alvarez, President of the New York City Central Labor Council, AFL-CIO, in a press release. “There have been far too many construction related accidents and deaths. This law will help ensure that all construction workers have access to the health and safety training that has been proven to save lives, while also protecting the safety of residents and pedestrians in the communities where construction is ongoing. This is a win for New York City.”