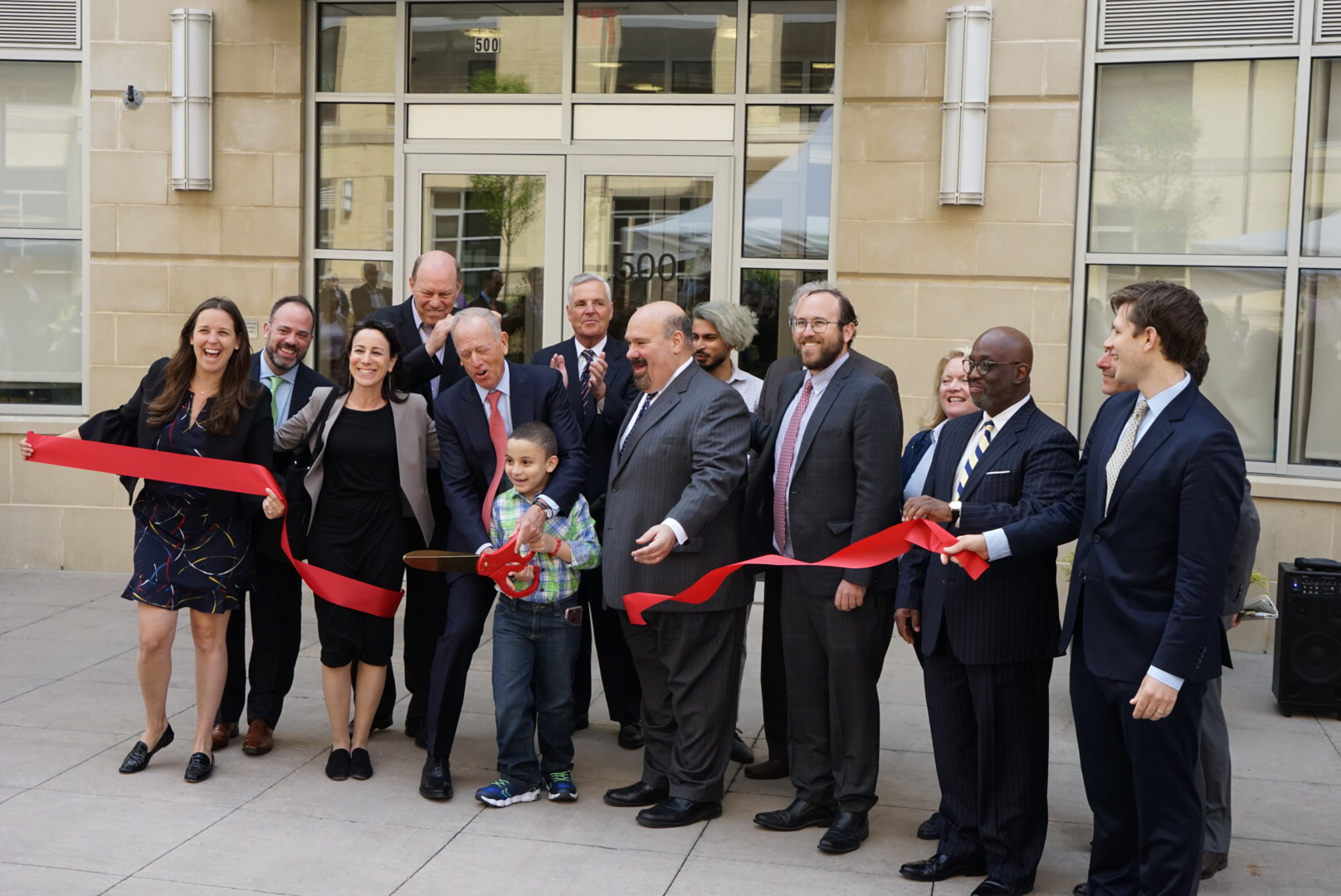 Douglaston Development and project partners celebrated the completion of Crossroads Plaza. in the Bronx. Built on the site of an abandoned gas station and an unused vacant parcel, the three-building, mixed-income, mixed-use development provides 425 affordable units, a 20,000 s/f pedestrian plaza, three commercial spaces totaling 60,000 s/f and a children’s playground.

Currently, the commercial spaces feature a Universal Pre-Kindergarten program and The New York Foundling. “Crossroads Plaza was developed to truly serve the needs of this neighborhood, and we’re proud to have taken a once-vacant site and transformed it into a vibrant hub of quality, affordable apartments, community space and retail space,” said Jeffrey Levine, Chairman of Douglaston Development.

“We would like to thank our partners, residents and tenants for the support and growth of Crossroads Plaza’s amazing community.”

The first phase of the three-phase development was completed in 2015 and offers 95 units at 80 percent of the area median income (AMI) and 31 units at 60 percent of AMI and below.

The total development cost for the Crossroads Plaza project was $160 million. In addition to subsidies provided from HPD and HDC,

By installing solar panels, Taconic and Clarion are improving an existing property and reducing its emissions.

The solar installation is expected to produce over 1.1 million kilowatt hours (kWh) of clean electricity, equivalent to removing 165 cars from the road for a year or the carbon sequestered by over 12,800 tree seedlings grown over 10 years.

“Clean power is a major priority for both Taconic and Clarion, and we’re thrilled to join the movement of making the Bronx community more sustainable,” said Andrew Schwartz, Vice President at Taconic.

“This initiative will benefit the environment, while also lowering operating costs and giving us the flexibility to allocate funds to other improvements.”

Installation is slated to begin June 2019 and expected to be completed by end of year.

Consisting of 3,005 305-Watt panels, the Bright Power team is using ballasted racking, enabling them to build the entire system without making any penetrations into the roof.

Using SolarEdge inverters with DC optimizers, the technology allows each solar panel’s production to be optimized independently of surrounding panels with energy production monitoring at the panel level.

This is the first time Taconic has incorporated solar technology into one of its properties and they plan to explore future opportunities for others.

The redevelopment is expected to create 2,700 jobs.

LEG President Joel Bergstein announced that vertical construction at the future logistics hub – the site of the former Military Ocean Terminal at Bayonne (MOTBY) – is set to begin in 2020.

The massive site has received hundreds of thousands of tons of fill-dirt hauled via barge and truck.

The logistics center has site plan approval for up to four buildings between 150,000 and 477,000 s/f, or a single 1.1 million square foot site, coupled with 40-foot ceilings, trucking lanes and employee parking.

“This development is a perfect example of the City of Bayonne, the Port Authority of New York and New Jersey and private business pulling together to get the project done,” Bergstein said. “We’re just seven miles from Newark and eight miles from the Holland Tunnel. We’re essentially the sixth borough, and this will be a prime distribution point for the city.”

The site contains 62.9 acres of riparian water rights, offers immediate maritime access to the Hudson River and the Newark Bay (via the Kill Van Kull), as well as direct access to the New Jersey Turnpike, Interstate 78, Route 440, Routes 1 & 9 and the GCT (just 800 feet across the channel).

LEG acquired the property in June 2018 and oversaw demolition of 70-year-old industrial structures and concrete foundations. To comply with post-Hurricane Sandy standards, the elevation of the site is being raised 6 feet.

Cushman & Wakefield has been tasked with recruiting warehousing and logistics companies.