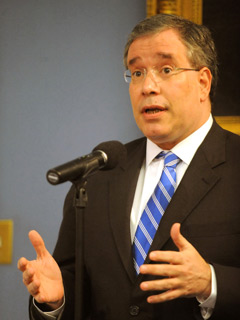 The letter grades, outlined in the “Making the Grade” report released today, are intended as a diagnostic tool for agencies to improve performance and transparency in M/WBE spending, increase competition in City procurement and save taxpayer dollars.

“When the City gets a ‘D’ for how well it is meeting its own goals, it’s clearly unacceptable. Growing the pie for M/WBE firms will be a key weapon in our battle against income inequality while increasing competition in procurement, driving down costs for taxpayers and creating jobs across all five boroughs.”
Local Law 1 of 2013 – which updated citywide goals for M/WBE procurement, broken down along ethnic and industry lines – provided the framework for the grading system.

Thirty-one Mayoral Agencies and the Comptroller’s Office received grades, which are based on actual spending by City agencies.
The citywide average for M/WBE spending as measured against Local Law 1 in FY14 was a grade of “D”. Just two agencies in the Comptroller’s report received a “B” grade: the Department of Cultural Affairs and the Landmarks Preservation Commission.

The Comptroller’s letter grades examine agency spending, not contracting, and excludes spending not subject to Local Law 1, such as human services.
“Improving our spending on M/WBEs is an economic and a social justice issue. It is unacceptable when not a single City agency can meet the standard set forth by our own laws. We need to take concrete steps to make sure that every company has an equal opportunity to compete to do business with the City. All agencies, and my office, must redouble efforts to help ensure our City’s economic future,” Stringer said.

Comptroller Stringer offered the following recommendations to improve Agency performance:
Expanding the Promise of Local Law 1: The “next generation” of the program should boost the number of agencies required to prepare utilization plans, offer enhanced training to M/WBE officers, and hold agencies accountable for spending further down their supply chain.

Increasing Transparency: Many City agencies have no specific information for or about M/WBEs on their websites. City agencies should have robust information available to help guide business owners through the procurement process.
Improving Data Entry: Agencies must redouble efforts to appropriately identify M/WBE contracts so existing spending can be tracked more effectively, thereby increasing the level of transparency and accountability.