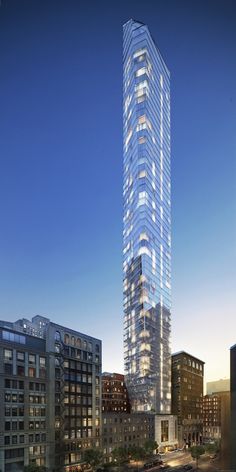 Over 400 new apartments are being built in the Flatiron District as developers eat into every piece of land available in the neighborhood.

Chinese developer Cheerland Investments could build as many as 106 apartments at 105 East 22nd Street, 106,000 s/f building it just bought for $128 million, according to brokers familiar with the property.

Along the street, at 455 East 22nd Street, developer Bruce Eichner is building a nearly 800 ft. tall luxury tower that will have 83 units.

And just west of that, at 7 West 21st Street, Friedland Properties has already started clearing the site of a former parking lot for its twin mixed-use buildings that will have 239 condos.

The block-through site on 21st/22nd Street between Fifth and Sixth Avenues, will also have 8,200 s/f of commercial space in addition to the apartments.

The apartment building boom has driven dozens of small-time businesses and charities to cash in on valuable real estate assets as the entire Midtown South area continues to attract new technology, advertising and media companies.

The new condo developers are likely looking to cater to that burgeoning office crowd and the cash they are offering for development sites is tempting plenty of sellers.

“The real estate has become so valuable in the area that a lot of these charities are being tempted to relocate,” said Leon, noting that he is currently working with another client being displaced by a similar property sale.

“CCC has been in this building for a long time and a move was not something they wanted to do,” said Leon. “They were nervous going into the process, but they are happy with their new space.”

CBRE’s Jonathan Cope represented the owner of 14 Wall, a building that suited the charity because of its proximity to many of its FiDi benefactors and City Hall supporters.

The rents, in the $40s psf range, are believed to be similar to their charity’s Flatiron rents, arranged in the early days of their lease. The neighborhood average is creeping more towards the $60s as new tech and media firms eat up office space.

At a forum hosted by the Asian Real Estate Professionals Association on Wednesday night, Bruce Eichner said he had just closed a $400 million loan with Goldman Sachs for his new Flatiron condo and the sales office for the building officially opened today (Friday).

“The 22nd Street building is probably the most elegant piece of architecture I’ve ever been associated with,” said Eichner.