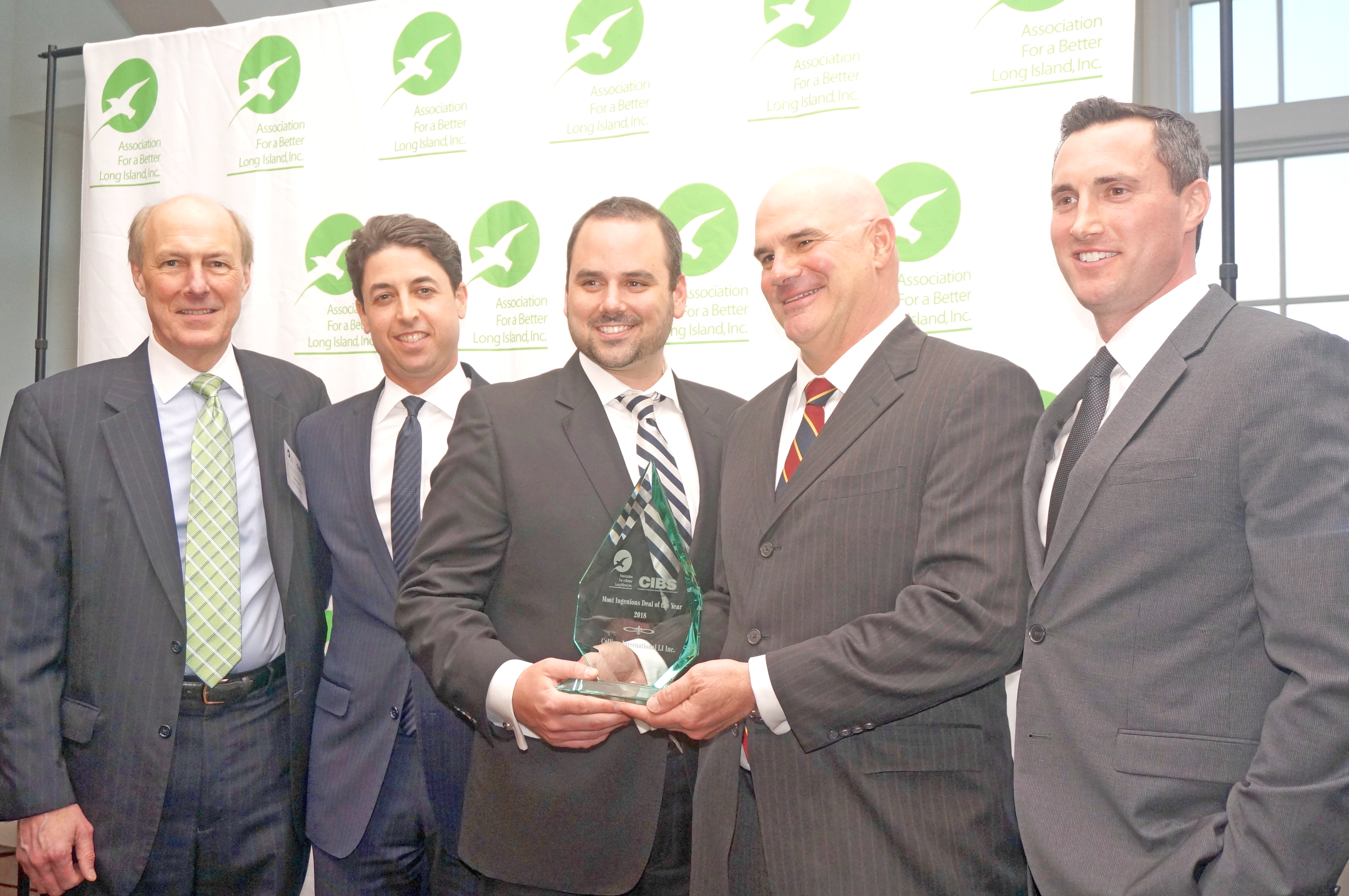 The Association for a Better Long Island (ABLI) and the Commercial Industrial Brokers Society (CIBS) their Most Ingenious Deal of the Year Award to a team of brokers at Colliers International.

Gus Nuzzolese, Darren Leiderman, Jason Maietta and Ken Enos, all of Colliers International Long Island, won for their handling of the sale of the former 272,000 s/f Pall Corp. headquarters at 25 Harbor Park Drive in Port Washington to Kiss Nail Products. Pall was sold to Danaher Corp. in 2015.

The award was shared with Connor Fought of Collier’s Washington, DC, office and Jeff Wagner of Collier’s Chicago office.

As part of the $30 million transaction, Pall agreed to lease back 90,000 s/f. The project received economic benefits from the Nassau County IDA. The building, which once housed Pall’s administrative and laboratory operations, was designed by Woodbury-based Spector Group and features 35-foot ceilings, glass-walled Class-A offices, a café and galleries lit by skylights. Pall put the property on the market in April 2016.

The biggest obstacle to the sale was that the Pall facility was never seen as a multi-tenant building, especially with its laboratories.

With the assistance of JRS Architect, the Colliers team devised a plan to convert the property to a multi-tenant office building while maintaining millions of dollars of filtration systems.

Pall received offers from various developers and agreed to a sale to one of them, but that buyer wavered before the transaction closed.

Kiss, another prospective buyer, did not want to use the building as a renovated office/laboratory and, instead, wanted to convert the building back a manufacturing/warehouse facility with some office.

The Colliers team then devised a plan to move Pall’s office space to an area contiguous to its labs, and create a building within a building for them.

The Developer of the Year Award, meanwhile, was presented to Rechler Equity Partners for its $250 million redevelopment of a former residential trailer park in North Amityville into Greybarn Amityville.
The 20-acre Greybarn complex is the largest rental development in the Town of Babylon with 500 one- and two-bedroom apartments and 32,000 s/f of retail space.

Greybarn includes a fitness center, screening room and communal spaces as well as outdoor facilities. Phase 1 and 2 of the project, 205 rental units, have been completed and Phase 3 (120 apartment) is due to be completed this summer.

Rechler Equity acquired the trailer park, which was in condemnation proceedings, in 2009. One of the biggest challenges was moving the park’s tenants. The town of Babylon and the developer ultimately negotiated a relocation expense package of up to $20,000 for the former trailer park residents.

Richler Equity began a five phase redevelopment of the property in 2015 with the first 139 luxury apartment and retail space competed in 2017.