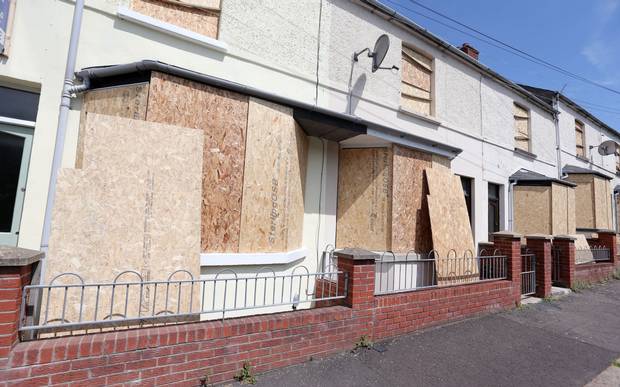 The city has filed lawsuits against the mortgage holders of five zombie properties — vacant, distressed, one-to-four family homes with delinquent mortgages — throughout Brooklyn.

The Department of Housing Preservation and Development (HPD) and City Law Department used data collected by HPD’s Zombie Homes Initiative, which works to hold non-compliant banks and mortgage servicers accountable for failing to maintain vacant properties on the brink of foreclosure.

The City is suing for over $1 million in penalties and the cost to of emergency repairs and maintenance incurred since the property was designated as abandoned.

“Zombie homes are blight on our neighborhoods and contribute to the city’s housing shortage. Through HPD’s Zombie Homes Initiative, we are holding mortgage holders accountable and intervening at properties that pose public safety risks, while also conducting extensive outreach to help homeowners who may be on the brink of foreclosure,” said HPD Commissioner Maria Torres-Springer.

“I applaud the Law Department for their efforts and thank our partners at LISC and the New York State Attorney General’s Office for their leadership in the fight to address zombie homes and maintain strong and healthy New York City neighborhoods.”

New York State Attorney General Barbara D. Underwood, said, “Through the funding my office secured in our settlements with the big banks, we’ve been able to empower communities across the state to fight the devastating effects of the foreclosure crisis and housing downturn.

“I’m proud that these funds have made it possible for New York City to tackle zombie homes and hold mortgage holders accountable to ensure stronger and safer communities.”

HPD’s Zombie Homes Initiative was launched in 2017 through funding from the Local Initiatives Support Corporation (LISC), which originated from settlement agreements with banks obtained by the New York State Attorney General’s Office. Over the past year, the Initiative has worked with City and State agencies, as well as community stakeholders, to identify zombie homes in Brooklyn, Queens, Staten Island, and the Bronx to create a database of properties that are likely to be zombie homes, design innovative ways to breathe new life into these properties, and connect residents at risk of losing their homes with foreclosure prevention resources.

Since its inception, HPD’s Zombie Homes Initiative has identified up to 4,000 zombie homes throughout the city, conducted more than 500 surveys of likely zombie homes, sent 26,000 mailings and made 15,000 robocalls to homeowners on the brink of foreclosure, and initiated City interventions on over 125 properties.

“Vacant and abandoned homes undermine property values and sow the seeds of neighborhood decay. The Department of Financial Services is pleased to have provided assistance to HPD and looks forward to continuing to work with all municipalities throughout the state erase the blight of zombie homes from New York,” said New York State Department of Financial Services Superintendent Maria T. Vullo.

The lawsuits were filed agains CitiMortgage, Wells Fargo and Rushmore Loan Management after the properties were assessed and warning letters sent to lenders and mortgage servicers.

The Zombie Property and Foreclosure Prevention Act requires mortgage holders to maintain properties they know to be vacant and abandoned, or face a civil penalty of $500 per property, per day, which the New York City Law Department can enforce.

Any penalties won will be retained by the City, and the City will also seek to require the lenders and mortgage servicers to bring properties into compliance and to expedite their foreclosures.

The Zombie Homes Initiative pilot concluded in July 2018, but HPD will continue to work with the Law Department to evaluate which of the remaining properties surveyed are appropriate for legal enforcement.

HPD will also continue to track and survey zombie homes to identify properties that are not being maintained in accordance with the law. Additionally, HPD will explore avenues for working with the State Legislature to strengthen the Zombie Property and Foreclosure Prevention Act.

“HPD’s Zombie Homes Initiative has achieved substantial success ensuring that banks fulfill their obligations to maintain vacant properties subject to foreclosure. But a stubborn few financial institutions have ignored HPD’s notices and have failed to meet their legal obligations to prevent these properties from becoming community eyesores. Consequently, the City has filed the first round of suits to ensure compliance and to seek statutory penalties,” said New York City Corporation Counsel Zachary W. Carter.

“In a city that desperately needs to uncover every possible housing resource, HPD has accomplished so much, so quickly, with its LISC zombie grant,” said Helene Caloir, Director of LISC’s NYS Housing Stabilization Fund.

“The agency has succeeded in identifying many zombie homes, taking legal action against a first group of lienholders who were failing to maintain their vacant houses, and helping tens of thousands of at-risk homeowners avoid foreclosure.”

A spokesman for WellsFargo said, ” We work diligently to manage vacant properties for which we are responsible and in a manner that benefits the community. This includes registering vacant properties as required by local ordinances and resolving any violations, fines or fees.

‘We have not yet been served with the city’s lawsuit so are unable to comment specifically on its claims.’