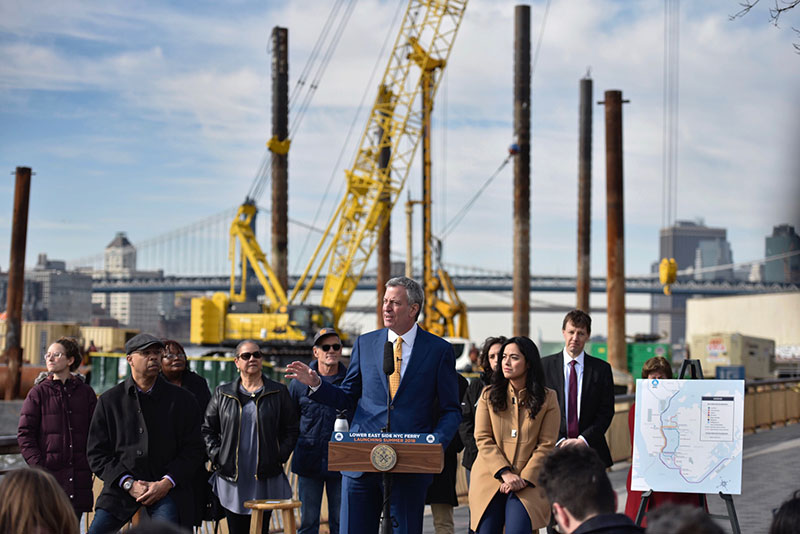 The mayor announced today the start of construction for the Lower East Side’s new dock as part of the NYC Ferry Service.

The Lower East Side dock at Corlears Hook, alongside the upcoming ferry landings at East 90th Street, Stuveysant Cove, and Soundview in the Bronx, are expected to be completed by the summer. The new docks will be stops along the two remaining NYC Ferry Service routes, the Lower East Side Route, which is expected to serve nearly one million residents, and the Soundview Route that will capture roughly 400,000 riders.

“Neighborhoods like the Lower East Side haven’t had the transit options they deserve,” Mayor Bill de Blasio said. “We can’t wait to launch two new ferry lines that will help New Yorkers get to work and to school, and to connect with their city.”

The construction work is being undertaken by Skanska, who was awarded a $45 million city contract in 2015 to create 10 new ferry landings and upgrade three others. Skanska completed its first dock at the Rockaway terminal in May 2017.

“These two new routes, Soundview and Lower East Side, will expand East River options for commuters and tourists traveling between underserved areas and we’re proud to deliver state of the art docks to the hundreds of thousands of riders these routes will serve,” Skanska USA’s executive vice president and general manager Tom Webb said. “NYC residents have already shown their desire for more ferry route options, with nearly three million riders in 2017, or 34 percent higher than initial projections.”

Skanska’s construction will call for embedding piles into the East River for the ferry landing barge, creating an access gangway to reach the barge, and installing utilities, security gates and signage.

NYC Ferry Service launched last year with $2.75 rides along four routes, the Rockaway, Astoria, South Brooklyn and East River routes, and has already served more than three million riders. When joined by the Soundview and Lower East Side routes this summer, the city’s ferry service is expected to cut down commute times for millions of riders and provide transit alternatives to those in underserved communities.