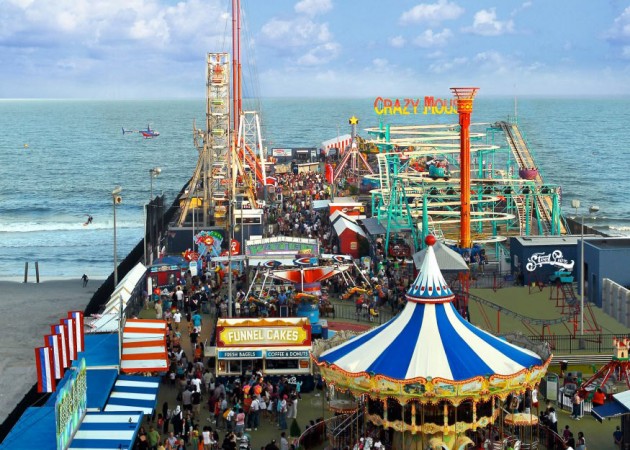 Chips might be down, but Atlantic City wants to be a winner again

“We put all our eggs in one basket with the casinos,” said Atlantic City Mayor Don Guardian. “We had the monopoly and when the monopoly died, so did we.”

Atlantic City, which has served as the Northeast’s gambling sanctuary since the late 1970’s, is no longer a burning North Star, shining the light for East Coast gamblers as they seek out the plodding of dice and the flourishing notes of beckoning slots.

One third of the city’s casinos shut down this summer and investors have all but fled the once booming Jersey shore town that, in its heyday, could compete with anything in Las Vegas.

The city closed out August with an unemployment rate of 10 percent, foreshadowing the 8,700 hospitality sector jobs that the state of New Jersey would lose the following month.

The region’s options for gaming getaways have multiplied over time. There are currently 19 other gambling destinations in the Northeast and more could be on the way.

The competition has taken a significant cut of the pie with gaming hotspots in Pennsylvania and Maryland out pacing the AC Boardwalk from April 2013 through April of this year. New York, Connecticut and Delaware were also active, making $23 billion in revenue between them last year.

Trump Plaza, Showboat, The Atlantic Club and Revel all succumbed to the lost opportunities at revenue. Trump Taj Mahal may very well fold as well by mid-November.

It was rumored earlier this year that Donald Trump was considering a return to the area, after surrendering all but 10 percent interest in Trump Entertainment Resorts — which owns the Plaza and the Taj —in 2009.

Instead, Trump has further distanced himself from Atlantic City and successfully took legal action in September to have his name removed from the two hotels that he once owned.

Mayor Guardian agrees, but sees brighter days ahead for the city.

The mayor painted a picture of a reborn Boardwalk where gambling was an accent as opposed to the main event. Should his projection be correct, the future of Atlantic City will be that of a well-rounded, family friendly shore point.

“That’s certainly my vision and that’s certainly where we’re transitioning the city to go,” said Guardian. “The proliferation of gaming on the East Coast was not foreseen all occurring in 2014, but we certainly did see the writing on the wall.”

While the doors of four of Atlantic City’s casinos slammed shut in 2014, those that are still standing have taken steps in recent years to improve the quality of their product.

Guardian singled out the Tropicana as a hotel that has taken pains to upgrade its facility, going so far as to improve the thread count of the rooms’ bed sheets. Mayor Guardian said that the hotels want guests to view them as resorts that “happen to have a casino.”

“There was no way with all the casinos on the East Coast (AC’s) could continue to survive,” Guardian added. “These properties are no longer just casinos, they’re resorts. The future that we see for Atlantic City is much more diversified. What we’re trying to do is find those cool activities that not every city has.ˮ

Those attractions include an addition to The Walk, an outdoor mall of outlet stores owned by Tanger Outlets. Bass Pro Shops is set to open an 86,000 s/f store – that it will get more than $34 million in public funding to construct – in 2015.

The Walk itself is an attempt by the city to clean up the neighborhoods immediately surrounding the Boardwalk, which is an initiative that several city officials and members of the business community told Real Estate Weekly was intentionally avoided in the past.

Before the level of competition rose, hotel owners did not want guests to be tempted to leave their resorts’ eateries or gambling floors and spend money elsewhere. Letting the surrounding neighborhoods fall into disrepair only dissuaded patronage at other establishments.

“That is not an effective strategy,” Trump told Real Estate Weekly. “It’s strangling one aspect of the city in hopes the other will be vitalized. It’s not an intelligent decision, but I do not think it was a conscious one. There are ways to increase or retain business without having to have an agenda that is detrimental to a city or place. These kinds of plans indicate a lack of creativity as well as intelligence.”

Intentional or not, strangling the peripheral neighborhoods is clearly not the current rule of thumb along the Boardwalk.

In 2013, Resorts unveiled the Margaritaville Complex which sits on the sands outside its boardwalk entrance.

“We really worked to position this property with the addition of new brands — Landshark and Margaritatville, Jimmy Buffets brands — to give people a reason to come above and beyond gaming,” said Resorts CEO Mark Giannantonio.

“You can come park in a garage, come out to Landshark, enjoy the beautiful beach — we just built this new beach bar — and never set foot in our casino,” Giannantonio said. “Atlantic City has a bright future and it’s not just going to be about gaming anymore.”

Like Resorts, Steel Pier anticipated the need to offer a wider array of attractions before casino doors began to close.

“Since we bought it (2012) we invested about $30 million,” said the co- owner of the attraction, Anthony Catanoso.

Catanoso has run the amusement property, which juts out into the Atlantic Ocean, since leasing it in the early 90’s. Now the owners, Catanoso and his brother/partner, are actively fortifying the park’s value.

“Our overall seven year plan totals about $105 million,” Catanoso said, “with new buildings going out over the pier with rides being underneath them. I see what our market does each year and I don’t think there’s any place that has the natural amenities that we have that lends itself to a family market. We have a great beach and a great boardwalk.

“We can shift from being a gaming town with a little bit of family, to being a family town with gaming as a bonus,” Catanoso continued.

The mayor, meanwhile, sees academia as another key cog in his mission to bring the city back to a healthy financial standing.

In October a bid by developer Glenn Straub to launch a college for “geniuses” at the site of Revel was topped by real estate asset giant, Brookfield, which plans to open another resort. Straub failed, but AC may still become a college town yet.

Mayor Guardian is excited for Stockton College’s potential arrival. The school, which is also attempting to obtain university status, is considering setting up a satellite campus in Atlantic City which Guardian called a “college district.”

Though Guardian is keen to diversify, one developer suggests that the city expand its gaming empire rather than scale it back.
“We want Atlantic City to come back. Part of our plan is to try and work with Atlantic City to try and help them come back,” said Jeff Gural, chairman of Newmark Grubb Knight Frank and the owner of New Jersey’s Meadowlands Race Track.

Gural is currently campaigning to build a full casino on the grounds of the Meadowlands. Whether he can move forward or not hinges upon a vote which will likely occur in November.

Noting that he will need South Jersey’s support, Gural told Real Estate Weekly that he is pulling for a revitalization of AC’s gaming industry, despite the fact that it poses competition.

“In order for anything to happen at the Meadowlands you need a referendum to be passed by the voters,ˮ Gural said. “It’s important to try and convince the people that are voting on this that the plans that we have would be beneficial to Atlantic City and not further erode their ability to compete.

“We’re just looking to recapture the business that’s being lost by people who are going to casinos in Pennsylvania and New York.”

While he’s rooting for them, Gural believes that Atlantic City should remain primarily a gaming destination instead of rebranding itself as a family-first environment.

“I don’t know if family is necessarily the way to go because you have the Jersey Shore, where families typically go,” said Gural pointing out that there are a vast array of shore points that offer more general attractions that are suited for all ages.

“In my mind, it will never move away from primarily a gambling destination, but they can add other things,” Adderly said.

Adderly, who oversees commercial leasing across the southern section of New Jersey, believes that patient investors should strongly consider buying property in Atlantic City while the area’s current economic state is in a valley.

“Atlantic city has a lot of challenges right now, there’s no question, but if you look at it. That mall that is being sold for $2.8 million (was built for) $200 million back about 10 years ago,” he said.

Adderly is referencing the Pier Shops at Caesars, a four-level shopping mall which has been on the market since 2011, only seven years after it was built.
Bart Blatstein, a developer from Philadelphia is the buyer. The Pier currently houses luxury retail brands such as Tommy Bahama, Gucci, and Burberry.

“Buy existing product that’s well located and take advantage of what is a distressed market,” Adderly advised would-be investors. “I think that five or six years from now, if The Pier does in fact trade for $2.8 million, I think it’s unimaginable that The Pier won’t be worth more than that.

“It’s hard to fathom that values (across the Boardwalk) won’t be better than that at some point in the future.”

Adderly stressed that while AC may be a prime investment for those looking to buy into existing assets, it is not the time to incur the debt of developing new structures. “A developer probably is going to have a hard time,” he said.

As the city continues to prime itself for the future, it’s clear that AC is actively trying to right the ship. Whether the city’s reversal of fortune is to be found in gaming, an upgraded amount of family entertainment, or via another driver, it seems that New York-based investors with time to wait out a storm, could consider the bargain deals along the shoreline.

Stuy Town value on the up