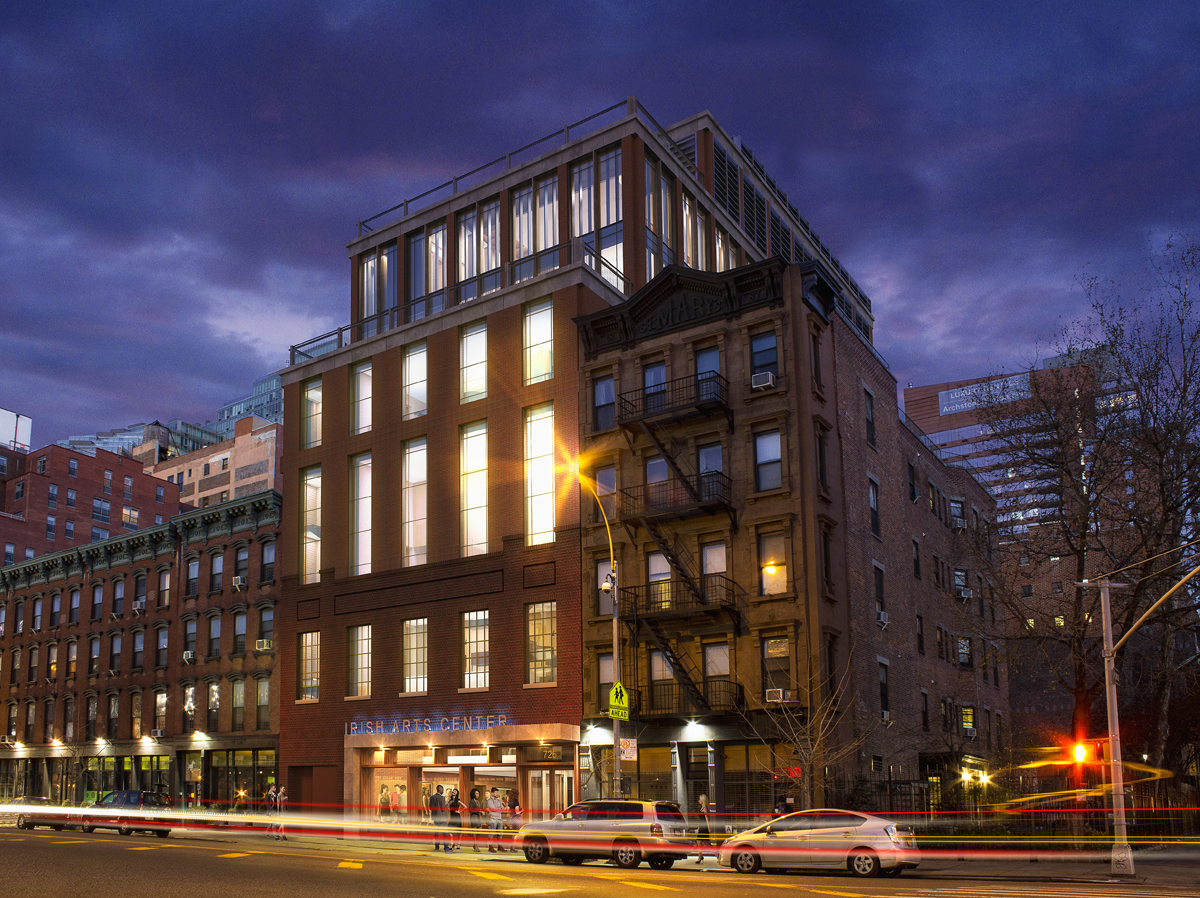 A partnership between New York City  and the Irish Government will hep finance the project, which the group said has “important thematic value as Ireland recovers from the global financial crisis and restores its economic sovereignty. ”

Public review of the project at 533 West 51st Street is expected to begin this spring with construction starting early next year.

The redeveloped center is scheduled to open in late 2016, a year of celebrations of the Irish Centenary. It is being designed by the Irish government’s award-winning Office of Public Works, in partnership with architect of record Davis, Brody, Bond.

“This will be a new center for a new century for a new Ireland,” said Irish Arts Center executive director Aidan Connolly. “We will finally have a proper home to share the excellence, diversity and dynamism of Irish culture with New York and the world, Honoring our immigrant roots while telling the story of an evolving Ireland and Irish America, the new Irish Arts Center will look outward and redefine what it means to be an ethnically rooted cultural center.”

Plans for the new facility were developed in collaboration with the Irish Arts Center’s Hell’s Kitchen neighbors and in partnership with affordable housing developer, Clinton Housing Development Company.

The building was designed to respect, integrate and benefit its surroundings. The façade of an existing auto repair shop is maintained and a new community garden will be added, welcoming residents living in the Center’s neighboring affordable housing units. The plans have been embraced by Community Board 4.

The new Irish Arts Center’s enhanced facilities will include:

·      A 199-seat, state-of-the-art theatre, with new back of house facilities, an expanded stage and an upper-level balcony to improve sight-lines and support larger-scale music, dance, film, literature, humanities and theater productions. New digital technology installed in the performance center will capture live shows and talks for wider distribution outside of New York, increasing the exposure of Irish culture and arts to the world.

·      Spacious studios, including a 1250s/f studio built expressly for dance classes, rehearsals, residencies and rental opportunities with an adjacent outdoor terrace which can also be used for catered events.

·      A street level social space for the Center’s visitors, artists, and patrons to gather before and after performances, classes and special events  and serve as a social hub that engages the Far West Side and surrounding neighborhoods.

“Our language, our culture, our humor – all the things that make us uniquely Irish – can contribute not just to the relationship between Ireland and America, but to the world,” said Irish Arts Center Honorary Chairman Gabriel Byrne.  “If we don’t tell our story who will?”

“The Irish Arts Center is a cause I believe in, and have for many years,” said philanthropist Loretta Brennan Glucksman, Chairman Emeritus of the American Ireland Fund and a leading supporter of the New Irish Arts Center.  “This new building may be the most important thing to happen in Irish America in the last 50 years.”

The Irish Arts Center was founded in 1972 to project a dynamic image of Ireland and Irish America for the 21st century, building community with artists and audiences of all backgrounds.

HAVE YOU HEARD: 15 CPW loft up for grabs, Drone tours come to real estate industry