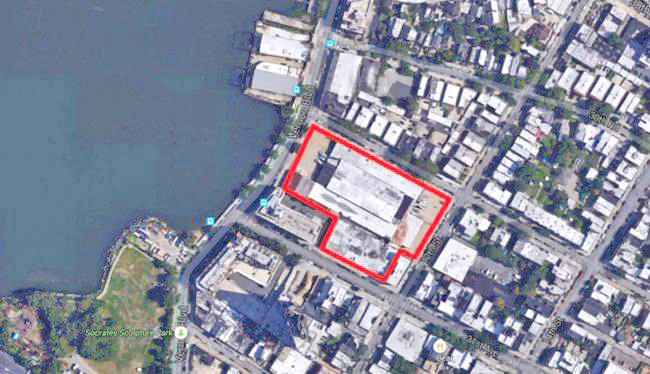 Cape Advisors and Wainbridge Capital have secured a $65 million first mortgage to finance their acquisition of a block-through waterfront development site in Astoria, Queens.

Mack Real Estate Credit Strategies provided the loan for the site the partners purchased for $85 million from Criterion Group.

The site at 30-77 Vernon Boulevard, aka 30-80 12th Street, has a zoning floor area of 522,132 s/f. Criterion had planned to build a 711-unit development on the site, according to The Real Deal and reportedly lined up a $215 million construction loan from Mack before the deal fell apart.

Eastern said the new owners plan a development of 770 affordable and market rate apartments in five buildings on the site, including parking and a full amenity package with retail, indoor and outdoor lounges, a large fitness center, multipurpose room, and a common landscaped rooftop with views of the East River and Manhattan.

The site is ideally located a two-minute walk to the Astoria Ferry Terminal, which offers a 24-minute ride to 34th Street and 35-minute ride to Wall Street with stops at Long Island City and Roosevelt Island. The property also is a 12-minute walk or short shuttle ride to two N and W subway stations.
“Cape Advisors’ and Wainbridge Capital’s new project will be a terrific addition to Astoria’s waterfront, which has become a popular location for residential development,” Hakim said.

“Several large-scale development projects are planned or under construction including Hallets Point, a 2.4 million square foot development with 2,000 rental units across seven buildings, and Astoria Cove, which will include 1,700 rental apartments.”

Murad added, “Astoria has experienced an increase in popularity with an influx of young professionals and new restaurants and nightlife and has become a high demand rental location with millennials.”

Cape Advisors, Inc. was formed in 1995 as a real estate development and investment firm. Since its inception, the company has completed over $1.5 billion in development projects, principally in New York City, Long Island and New Jersey.

Wainbridge is a private real estate investment, development and asset manager of landmark properties in prime locations throughout Europe and North America.