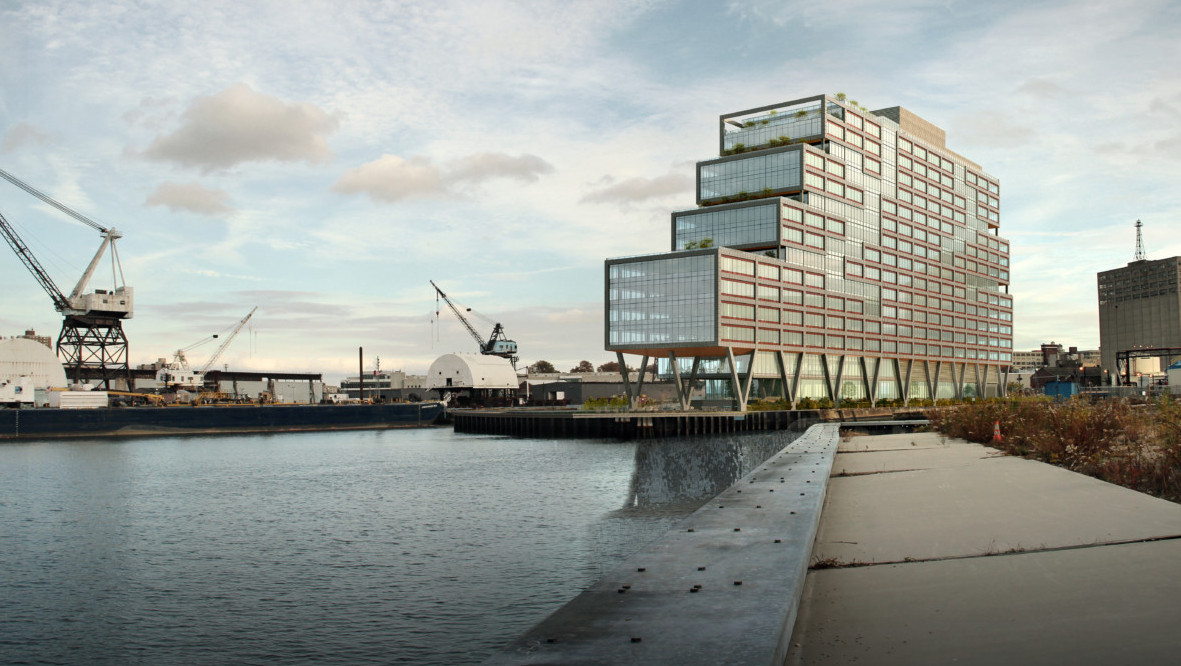 A joint venture between affiliates of Boston Properties and Rudin Development has closed on a $250 million construction loan for Dock 72, the 16-story, 675,000 s/f creative office development at the Brooklyn Navy Yard.

The financing is led by J.P. Morgan, M&T Bank and U.S. Bank. Further terms of the transaction were not disclosed.

With Dock 72, the joint venture is undertaking one of the largest New York City commercial buildings to be constructed outside of Manhattan in decades. WeWork will anchor the new building with a 222,000 s/f lease in addition to acting as co-developer and curator of the amenity spaces, which include a health and wellness center, specialty food and beverage offerings and a rooftop conference center. The joint venture broke ground in May 2016 and the project will be ready for tenant fit-out in late 2017 and will be completed in early 2018.

“The Boston Properties/Rudin team is excited to close this transaction with JP Morgan, M&T Bank and U.S. Bank to move forward with creating this dynamic, unique project, which will be the office building of the future,” said Michael Rudin, partner in Rudin Development, on behalf of the joint venture partnership.

“Co-working space is an integral part of New York’s new economy, transforming the way people do business. With the development of Dock 72, we are building the infrastructure to meet that growing demand.”

“Representing an investment of nearly $400 million, Dock 72 is already having a strong impact on the area’s economy, putting hundreds of people to work in what will be a truly iconic addition to the Brooklyn Navy Yard. In the long term, the building’s tenants will bring thousands of good-paying jobs to the Yard, significantly contributing to the Yard’s largest expansion in 50 years,” said Brooklyn Navy Yard Development Corporation President and CEO David Ehrenberg.  “Achieving this important milestone affirms the private sector’s confidence in both Dock 72 and in the Yard itself.”

Dock 72 is located within the Navy Yard on a 60,000 s/f strip of land jutting out into Wallabout Bay in the East River between two active dry-docks, offering views of the City and the activity of the Navy Yard.

Designed by S9 Architecture, with the lobby, common areas and amenities designed by Fogarty Finger Architecture, the building celebrates the surrounding maritime and industrial history of the Navy Yard and is designed to drive innovation and collaboration between tenants.

Upon completion, the building will feature floor plates ranging from 40,000 to 60,000 s/f, offering contiguous and easily devisable blocks of space for a variety of tenant sizes.

The joint venture is seeking LEED certification for the project and the building includes myriad state-of-the-art design, technology, sustainability and resiliency features, including Nantum, an operating system for the built environment.

The construction financing for Dock 72 follows a blockbuster year for commercial activity at the Navy Yard.

Earlier this year, several newcomers signed leases at Building 77, a one million-square-foot property that is currently undergoing a $185 million renovation by the Brooklyn Navy Yard Development Corporation.

They include New York City-based food institution Russ & Daughters, which signed a 14,000 s/f lease to anchor the new public food hall and manufacturing space at the property, and tech incubator and seed fund 1776, which is taking 30,000 s/f on the top floor.