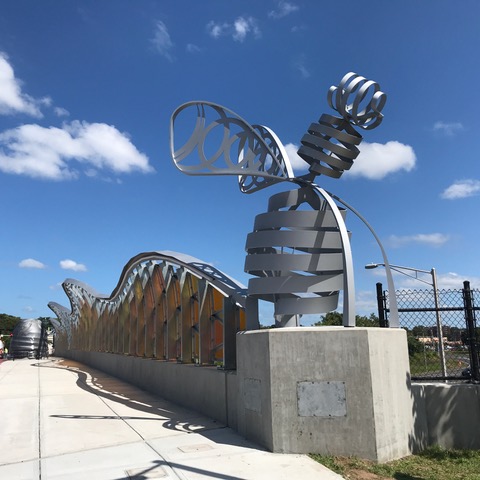 Beehive bridge brings community together after road tore it apart

Orchestrated by Mayor Erin Stewart with the support of locals, the project has been championed by Mark Moriarty, P.E., Director of Public Works for New Britain, who has provided leadership and actively engaged community stakeholders.

The renovation marks the completion of the latest phase of this streetscape project to unite the city, both literally and symbolically, which was long ago divided by a highway, Route 72.

“To attempt to reknit a community divided long ago by modern highway infrastructure required creating an inviting space for pedestrians and cyclists, that would also offer residents a unique place to interact.”

With the primary goal of creating an active business and entertainment corridor in the downtown area, the project connects Broad Street with the Little Poland neighborhood and the New Britain Plaza business district.

Svigals + Partners created a design scheme for a pedestrian-friendly streetscape with an abstract take on the “beehive” theme that has long been associated with New Britain.

The city’s official seal prominently features a beehive and the motto “industry fills the hive and enjoys the honey” in Latin.

The concept envisioned by Svigals + Partners for the 265-foot-long overpass features colorful translucent panels in an abstract honeycomb pattern that separate the overpass visually from the highway below. In shades of gold and yellow, the panels produce a variety of patterns and colors depending on the time of day and position of the sun. The design incorporates contemporary artwork integrated directly into the structure: four large-format stainless-steel honeybee sculptures, and an outsized beehive in the center of the bridge.

The design also significantly increased the width of the sidewalks across the bridge and incorporates bike lanes and two ‘pocket parks’ on the north side.

“From the beginning, we worked alongside Fuss & O’Neill and Pirie Associates to engage not only with civic leaders but directly with members of the community,” says Chris Bockstael, architect and partner at Svigals + Partners. “The result is a reinvention of the city that belongs to, and reflects, its citizens.”