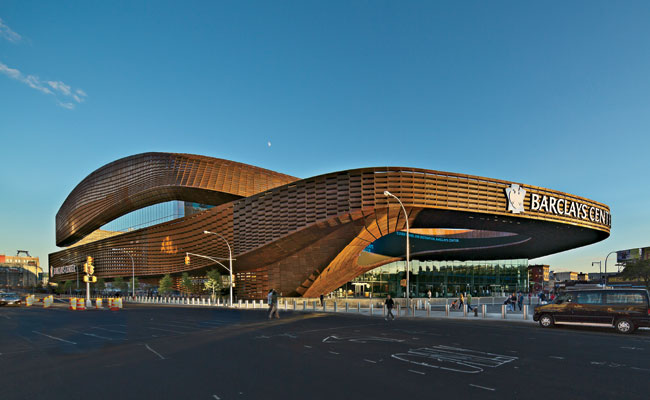 Barclays Center to get a green roof

Forest City Ratner Companies and Shanghai-based Greenland Group Co. announced that they will install a green roof on Barclays Center in Brooklyn

In December, FCRC and Greenland completed a definitive agreement for a joint venture to develop Atlantic Yards, a 22-acre residential and commercial real estate project in Brooklyn.

The joint venture, which is expected to close in 2014, would cover both phase one and phase two of the project – excluding Barclays Center and the first housing tower, B2 — including infrastructure, a permanent MTA rail yard, a platform above the rail yard and future residential units.

“Our original design for the arena had anticipated a green roof as part of our effort to achieve Silver LEED certification,” MaryAnne Gilmartin, FCRC President and CEO, said.

“While we independently reached that goal, we always hoped to still create a green roof, further improving the environmental footprint of the arena and also making a more direct connection to the sedum covered transit entrance on the plaza. Thanks to Greenland, which shares our commitment to sustainable development, we now have the resources to make this dream a reality.”

Gilmartin explained that in addition to providing a more appealing roof for people visiting and living around the arena, it will also enhance the space for those who will be living in the residential buildings surrounding Barclays Center.

Ifei Chang, CEO Greenland USA Holding Companies, said “Greenland is very excited about working with FCRC on what we believe will be one of the largest and most impressive green roofs in the City and perhaps the country. We are strongly committed the environmental benefits of green roofs. But beyond that, we see this as a really strong statement to the people of Brooklyn, and really the people of the world, that Greenland is a proud partner at Atlantic Yards. We know the residents who move to Atlantic Yards will look upon it proudly and we’re hopeful that others will celebrate the greening of our great urban areas.”

The new roof will be built above the existing one, with an air gap that goes from four feet at the edge of the roof to 10 feet at the highest point.

The roof will be supported by a steel structure. Sedum trays will be arranged to create a “flocking” pattern complementary to the weathering steel exterior. The trays will be pre-fabricated for streamlined installation. In addition, the arena foundation was built to support this type of load, so minimal reinforcement is required.

It is anticipated that three cranes will be needed to install the structure over a period of six months. The total duration of roof construction will take approximately nine months. FCRC will coordinate with relevant City agencies.

Governors Island projects in full bloom in time for summer