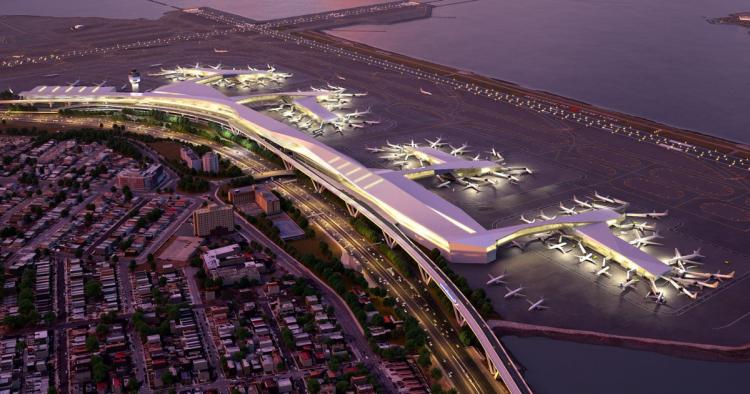 $4B LaGuardia rebuild gets off the ground

Governor Andrew M. Cuomo, together with Delta CEO Ed Bastian, announced the start of construction on Delta’s new facilities at a groundbreaking ceremony at LaGuardia Airport after the Port Authority of New York and New Jersey signed a new, long-term lease with Delta.

The groundbreaking marks the beginning of construction on the final component of the entirely new, unified airport at LaGuardia, which will provide all LaGuardia travelers with state-of-the-art amenities and expanded public transportation, including the planned AirTrain.

Governor Cuomo also announced a breakthrough with LaGuardia Gateway Partners (LGP), the firm that is building the western half of the airport.

JLC Infrastructure, a joint venture comprising Magic Johnson Enterprises and Loop Capital Markets LLC, will become an MWBE investor with LGP, marking the first time in the state’s history that there will be an MWBE firm investing equity in a public-private construction project.

“LaGuardia is a pillar of New York’s transportation network and a key driver of economic growth, but for too long the airport has been unworthy of New York State,” Governor Cuomo said.

“The groundbreaking at Delta’s facilities represents another step forward as we build an entirely new airport at LaGuardia. Together with our private sector partners, we are making rapid progress to create the world-class gateway to the Empire State that New Yorkers deserve.”

Delta is investing $3.4 billion to construct the eastern half of the new LaGuardia-the first new airport in the United States in more than 20 years.

The western half, as well as the roadways, are already under construction following a groundbreaking in June 2016. The first new gates are scheduled to open next year and the new airport is on track to be fully completed by 2021.
The Port Authority is committing $600 million to leverage Delta’s $3.4 billion investment to rebuild its terminal and gate facilities at LaGuardia Airport.

The Port Authority’s commitment includes $200 million towards the new Delta facilities, including the construction of new concourses and ramps; $185 million for a new electrical substation to support the power requirements of the new building, plus an expansion of the East Garage and temporary parking during construction; and $215 million for new roadway and additional supporting infrastructure that is typically the responsibility of the Port Authority in new terminal developments.

Delta’s investment in the new facility is the airline’s largest investment in its history and is one of the largest private investments in a public asset in New York State.

Delat has invested more than $2 billion at John F. Kennedy Airport and LaGuardia airport over the past decade.

JLC LaGuardia’s investment in LGP represents a shift in the state’s MWBE commitment from certified MWBE firms providing goods and services for value to the first ever opportunity for a MWBE firm to create wealth by investing in the nation’s largest public private partnership here at LaGuardia.

In 2014, Governor Cuomo set the nation’s highest goal for MWBE procurement at 30 percent. For fiscal year 2015-2016, MWBEs secured $1.9 billion in State contracts and under the Governor’s leadership, more than 5,500 MWBEs have been certified since 2011.

During his 2016 State of the State address, Governor Cuomo pledged to increase MWBE certification by an additional 2,000 businesses – the State is on track to meet that goal by 2018.

By moving the unified airport closer to Grand Central Parkway, the project will increase airport taxiways by more than two miles and reduce airport ground delays.