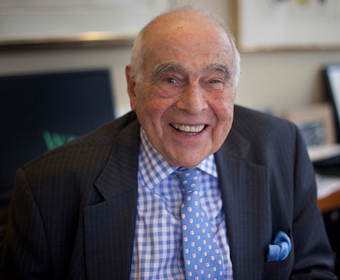 Victor Elmaleh, chairman and founding partner of World Wide Group, died on Monda at the age of 95.

Mr. Elmaleh was a ‘renaissance man with wide-ranging talents, knowledge and accomplishments.  Real estate legend, champion athlete, philanthropist, musician, artist, architect, father, grandfather, husband,’ are just a few of the many words that his family, colleagues, friends and peers use to describe him.  He impacted New York City in each of these roles throughout his lifetime.

Born in Morocco in 1918, Mr Elmaleh came to the US at the age of six and went on to attend Brooklyn College. He studied piano and music, but decided to change his field of study at the age of 20 and transferred to the University of Virginia, where he earned a degree in architecture.

He worked in architecture until the late 1940’s. In 1954, with the support of his father, Raphael H. Elmaleh, together with Frank and Arthur Stanton, he launched World-Wide Volkswagen; which became the first Volkswagen distributor in the US, and grew to include Porsche and Audi. Separately, they were distributors of Renault and Peugeot.

In addition to his real estate activities, Mr. Elmaleh had recently been an active investor in green, energy efficient technologies.

His artistic and philanthropic efforts have been felt across NYC for over half a century. He painted 4,000 small paintings and has had 35 exhibitions; was a board member of The Orchestra of St. Luke’s; served on the board of Concert Artists Guild which established an annual competition in his name and produced recordings for young accomplished pianists under the label The Victor Elmaleh Collection.

Dedicated to his wife Sono, a ballet dancer with Les Ballets Russes and Broadway star who appeared in On the Town, Mr Elmaleh established a scholarship at Career Transition for Dancers to fund dancers’ transitions to their next career.

He was an alumnus of the Architectural School at University of Virginia (class of ’42) and there is an Elmaleh Building at the School of Architecture and a gallery named in his honor.

Mr Elmaleh also devoted considerable time to sports in which he won the National Titles in Handball in 1951 and Squash Doubles in 1968, at age 49. At the age of 81, he won an open pro-am squash tournament with the great Gary Waite. Because of his passion for the sport, Mr. Elmaleh set up a program with US Squash to promote the game of squash doubles, and contributed to the building of The Elmaleh/Stanton Squash Center in Southampton as well as Toronto. He also had a ranking of #1 in senior tennis and won two tournaments with Bobby Riggs.

Mr. Elmaleh’s 65 years of service to The World Wide Group coupled with his 71 years of marriage to his wife, Sono Osato, are a shining example of what it means to live your life dedicating time and energy to your passions.

Mr. Elmaleh is survived by his wife, two sons Niko, an Executive Vice President of World Wide Group, and Antonio, an author whose most recent book is The Ones They Left Behind.

Memorial contribution may be made to Career Transition for Dancers (http://www.careertransition.org) or Concert Artists Guild (http://www.concertartists.org). Services will be private.