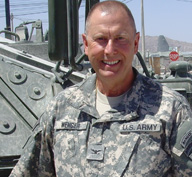 What’s it like to be a manager in a war zone?

In August of 2008, returning from a patrol of the streets of Baghdad, and within 200 meters of entering Forward Operating Base (FOB) Shield, the 4th Brigade Combat Team was ambushed by IEDs and small arms fire resulting in casualties.

First responders and Quick Reaction Forces (QRFs) immediately came to their aid only to be hit again by a secondary attack — resulting in more casualties.

The coalition forces and contractors mobilized as trained. The ambushed unit and the combined Shield forces killed the attackers, secured the patrol casualties and moved them back to the base.

Casualties were treated quickly and efficiently, evacuations by air were made expeditiously and the incident resolved. Unfortunately, there were nearly a dozen casualties, both wounded and killed.

What is it like to be a property manager in the trenches of a combat zone?

For 16 months, from July 2008 to October 2009, I was the senior officer in charge of FOB Shield in eastern Baghdad, Iraq.

Shield (also later known as Joint Security Station Shield or JSS Shield) is now closed and turned over to the Iraqi government, as were all the military bases in Iraq at the end of 2011.

Shield was a 50-acre complex with a fenced and guarded perimeter of more than two miles. The building square footage was never measured, but conservatively exceeded five million square feet.

At the height of the Iraq War, there were more than 580 FOBs operating like Shield in Iraq, and more than 350 in Afghanistan, ranging from having a few hundred to 30,000 operational personnel. All required the same meticulously detailed supervision, property and facility management as Shield.

While many of the property management tasks were similar to such work anywhere — budgets, capital improvement projects, tenant complaints, daily tenant services, and security and emergency management challenges — these common tasks were accentuated by the fact that some of the neighbors were seriously dangerous, and frequently tried to kill tenants.

FOB Shield was developed in 2004, during my first tour in Iraq, as a small support base to provide living space for the military and contractual advisors to the Ministry of Interior and the Baghdad Police Academy that existed to the immediate west of the operating base.

The police academy was and is the primary establishment for the education of the hundreds of thousands of Iraqi police patrolmen and officers required to establish and sustain the security of this troubled country.

The base was originally part of the Iraqi Olympic complex developed in the ‘70s and ‘80s by Saddam Hussein in his exaggerated hope that Iraq would one day host the summer Olympics.

Adjacent and southeast of Shield, was the Olympic-style Shaab Soccer Stadium, a swim and diving stadium and a basketball complex, along with support office buildings.

The 13-story Ministry of Interior building was originally built to be a hotel for the Olympic complex — consisting of low-lying, single-story dormitory buildings — and was somewhat inappropriately designed and lacking infrastructural support to serve as the major ministry office building that it later became.

I lived in one of these buildings, with communal plumbing at each end of 20 or so 12×7 ft. single rooms.

In all, during my tenure at any given time, more than 2,500 coalition forces and contractors operated from Shield.

The neighborhood was not friendly. Shield had, on occasion, been the target of mortar and rocket fire that occasionally caused coalition casualties.

Automatic gunfire, Improvised Explosive Devices (IEDs) and detonating car bombs could be heard, and often even felt, exploding nearby day and night close to Shield.

The shops, eateries and a barbershop were run by local nationals who were vetted by our security services. Virtually all commodities for sustainment had to be shipped in by trucks and sewage and trash removed.  Shield consumed more than 42,000 gallons of potable water per day or 320,000 gallons per week.  Diesel fuel was consumed at the rate of 56,000 gallons per week, and we burned 1,000 of MOGAS (gasoline) per week.

Fresh water, food supplies and sewage had to be trucked in and out of Shield daily. Deliveries and services were always a security concern and were monitored very closely for sabotage.

The dining facility was staffed by contractors from Sri Lanka, supervised by an American expert and served more than 3,000 meals per day

At first, Shield had no amenities for soldiers except for a Post Exchange (PX) that was run by volunteer staff.

A Green Bean Coffee shop and a Pizza Hut were installed as well as a paved, two-mile long, one-meter wide running track that wound around the complex to allow tenants to run in relative safety.

The process of making these capital improvements was more arduous than in civilian property management. Similarly, labor contracts were extensive, expensive and difficult to facilitate and manage.

The budgeting, contract letting, administering, financial management and compliance solution process, as well as the supervision of the actual work by the contractors, often fell to me with only one other part-time officer to assist with the process.

Parking management is difficult in normal conditions. Imagine how complicated and critical parking management was in a combat zone, where a quick reaction force needed to be able to respond to an attack or medical emergency.

Tenant disputes were not frequent, but were convoluted and political. Priorities for military by rank, and contractors by position and seniority, had to be considered and accommodated. These often required adherence to specific regulations for each type or person and entity.

Power and computer issues were constant challenges. For the most part, the enormous and numerous generators necessary to provide power to the complex 24/7 were maintained, but repairs were frequent, and outages did occur.

Emergency management and security management were also significantly challenging and critical in this combat zone.

An inspection team from the U.S. came to Shield toward the end of my tour to examine and run tests on our security and emergency response capabilities.

The inspection team from Washington, D.C. reported that Shield had one of the highest security and readiness ratings of any base in Iraq.

Security and safety of personnel at Shield was complicated by the fact that all tenants carried weapons and ammunition at all times.

When departing Shield for work, all weapons were loaded. When returning to base, all weapons were cleared according to strict protocols and procedures at clearing barrels to ensure that no errant or negligent discharges occurred.

However, the daily loading and clearing of thousands of weapons resulted in occasional negligent discharges. Such discharges were a very serious and dangerous matter, and required command discipline measures be taken.

Property and facilities management in a combat zone is obviously a challenging, demanding and gratifying job with several unusual requirements.

However intense the requirements for the job, the experience and professional training I gained in over 25 years of work in our industry served me well in my “additional duty” as the responsible officer for Forward Operating Base Shield.
William V. Wenger, CPM, RPA, U.S. Army Colonel, Retired, (wvwenger@yahoo.com) is past president of the IREM Greater Los Angeles Chapter No. 6 and has over 25 years’ experience in the commercial property management industry. After serving 42 years in the U.S. Army as an active duty and reserve Infantry, Airborne Ranger, he now develops college curriculum and teaches in the Republic of Georgia.

Extracts from “Property Management in a Combat Zone” reprinted with permission of the Institue of Real Estate Management.Read the full report in the Jan./Feb. 2014 issue of the Journal of Property Management (Volume 79, No. 1), a bi-monthly publication of IREM.