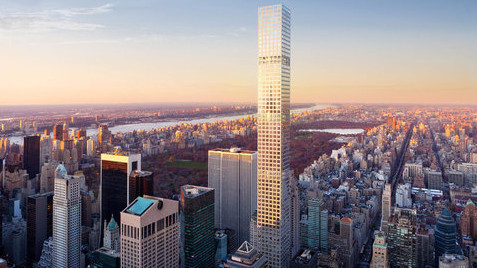 In Manhattan’s concrete canyons, daylight is becoming a rare commodity.

2014 saw the opening of the Western Hemisphere’s tallest office tower and the topping-out of its tallest residential tower. Soon, half a dozen residential skyscrapers around 57th Street will stand shoulder-to-shoulder with the Empire State building, until fairly recently, by far the city’s tallest building.

In the west side, a cluster of mixed-use towers is growing around the Hudson rail yards, while downtown is celebrating its revival with a few record-setting skyscrapers as well.

Amid all the construction, you would be hard-pressed to find a New Yorker who hasn’t noticed that buildings seem to be getting taller and taller.

The phenomenon is a global one. 2014 was the tallest year in the history of construction.

Worldwide, 97 buildings of more than 200 meters were completed, according to a report by the Council on Tall Buildings and Urban Habitat.

One World Trade Center was the tallest of them all, rising above New York’s increasingly impressive skyline with a height of 1,776 feet.

Some have accepted this upward race as an inevitable part of human progress — like cars getting faster and computer chips getting smaller.

Conventional wisdom holds that developers will build as high as zoning and technology allow. And as the former tends to get relaxed more and more and the latter improves, there is only one direction: up.

But there is, in fact, little inevitability in the current skyscraper boom. The upward race is the result of a complex mix of factors that have more to do with cyclical forces than linear progress.

For each main category of new construction — condo, rental and commercial — the height calculation is different. Look more closely at how developers pick a building’s height, and you get a sense of why some towers get taller and taller – while others don’t.

It may seem like a foregone conclusion that developers in Manhattan will build as high as zoning and technology allow. After all, they paid a steep price for a parcel of land.

“Owners are looking to maximize returns,” said Richard Anderson, head of the New York Building Congress. “One way to do that is to construct the most floor space possible. If you have a fixed lot, the only way to increase floor space is to go up.”

Nonetheless, there is only a small subsector of Manhattan’s new development market where new buildings almost always rise as high as they possibly can: condo construction around Central Park’s southern fringe and in neighborhoods such as Tribeca and the Financial District. Rental and office developments, on the other hand, often don’t reach the maximal height allowed.

There are several factors explaining this difference. Construction costs rise disproportionately beyond a certain height, explained Ralph Esposito, president of Lend Lease Construction LMB. This means adding floors is often only profitable if buyers or renters are willing to pay a premium.

Esposito said it takes longer to get workers and building materials to higher floors, resulting in lost time and productivity. Moreover, the stronger winds on high floors often interrupt construction, as work is illegal if winds exceed 30 miles per hour.

“The winds when you get past 40 stories are a very different environment for us,” Esposito said, adding that he estimates high-rise developers on average lose about five days to wind. Needless to say, lost time is lost money, driving up construction costs.

For condo construction in the city’s most desirable locations, the premiums buyers are willing to pay for penthouses more than make up for higher construction costs. This means developers have an incentive to build as high as possible.

For example, the penthouse at Extell’s One57 just sold for $9,000 per s/f, well above the building average of $6,000. Property Markets Group’s Kevin Maloney recently told Real Estate Weekly that demand for penthouses has prompted him to design his planned condo tower 111 West 57th Street as high as zoning allows — in this case 1,400 feet.

But for rental development, the calculation is radically different. High floors in rental buildings don’t typically achieve premiums similar to their condo peers, leaving construction beyond a certain height unprofitable.

“Height by itself isn’t necessarily a good thing because it adds costs,” argued Jon McMillan, director of planning at TF Cornerstone, a development firm specializing in rental projects. “You only need it if you want to go over someone else (to get views).”

“A 30-story building is about the maximum in efficiency. Then the cost of elevators, fire safety and water pressure gets more complex,” he claimed. TF Cornerstone’s waterfront rental developments in Long Island City, for example, are all less than 300 feet tall.

“Because apartment buildings are so much less densely populated than offices, elevators don’t need to be constantly added for height,” argued Janno Lieber, president of WTC Properties at Silverstein Properties. “That’s why the growth in height has been more dramatic in residential units.”

Since elevators in office buildings tend to get used a lot, developers need to add more of them if they want to build beyond a certain height. But adding elevator shafts increases the building’s core, reducing rentable space throughout the building. Thus, paradoxically, building higher can actually reduce usable space and make a tower less profitable.

This helps explain why office developers often don’t build as high as zoning allows. For example, Massey Knakal recently marketed two parcels in the Hudson Yards district that would allow for an 1,800 foot tall office tower — the tallest in the Western Hemisphere. Tishman Speyer bought the parcels last April, but merely filed permits for 61 stories.

It is telling that those office towers that do rise to freakish heights often do so only with the help of generous tax breaks, or even subsidies, as the case of 1WTC shows.

Advances in technology play a surprisingly minor role, according to experts interviewed for this article.

Compared to other industries, construction has been fairly resistant to innovation over the past few decades. “There have been tweaks to concrete mixes, but there’s been nothing like the internet that changes the way we build,” argued Lend Lease’s Esposito.

To be fair, the development of denser forms of concrete and steel has made skyscraper construction easier, allowing the core structure to eat up less space. A super-skinny tower like 111 West 57th Street would not have been possible 80 years ago.

The same can be said of zoning and cheap credit. Rezoning campaigns have made high-rise construction possible in a number of new neighborhoods, while readily available loans offer the necessary financing. But just because developers can build higher doesn’t mean they will.

In the end, it all boils down to demand – which has more to do with cyclical factors than with historical inevitability. Investors are snapping up luxury condos in part because other assets are seen as less safe and less profitable. Once the global economic climate changes, demand can easily dry up. Office construction is obviously tied to business cycles, and could well stop during the next downturn, as it did in 2009.

In the early 1930s, most New Yorkers – much like today – were convinced that buildings would keep on rising higher and higher. But the Empire State Building’s height remained unsurpassed for decades, and it once again became the city’s tallest building after 2001.

Perhaps the most convincing argument that skyscraper booms are inherently cyclical comes from Gunter Loffler, a professor of finance at Ulm University in Germany.

He studied the correlation between high-rise construction and stock market returns from 1871 to 2009 and found that skyscraper booms tend to take place during stock market booms and are often followed by a market crash.

As it happens, the Dow Jones Industrial Average closed at an all-time high on December 26.