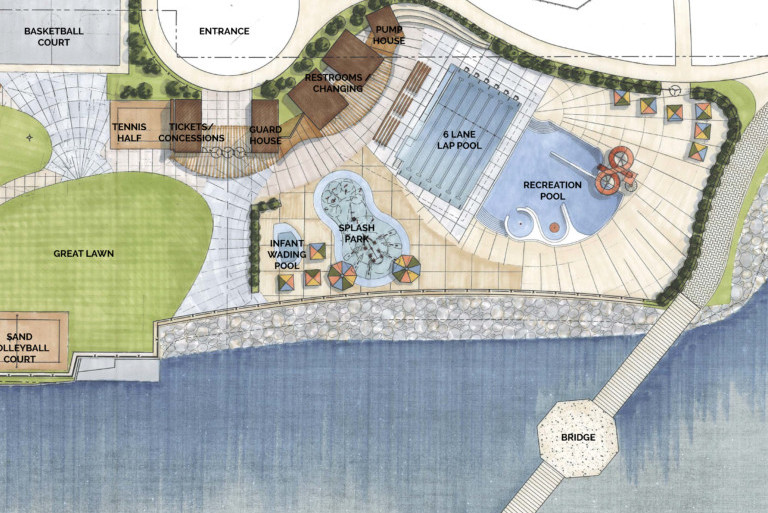 RSC Architects has designed a $10.5 million pool complex for the Hudson River town of Weehawken.

Once complete, by the end of 2019, a new pedestrian bridge will connect the existing Hudson Riverfront walkway to the Lincoln Harbor Park waterfront walkway, creating a continuous 15.5 acres of waterfront recreation space.

“It will be a phenomenal complex,” said Weehawken Mayor Richard Turner as the plan was unveiled this week. “When this recreational complex is completed, together with Weehawken’s existing recreational waterfront areas, the township will have a total of 15.5 acres of continuous active and passive recreation space along the Hudson River. ”

The mayor said the pool should be open by summer of 2019 and the entire complex complete by the end of 2019.

Weehawken, which sits on the western shore of the New Jersey Palisades, has seen an explosion of development along its waterfront in recent years. Its small town feel and easy commute to Manhattan have seen its population swell from 12,554 to 14,040 between 2010 and 2015, a pace  of growth (11.8 percent) much higher than the state and national average.

But while the new luxury towers have come with their own amenities, including pools, doggie parks and gyms, longtime residents have lamented the lack of a public pool for years.

The site of the new pool was  originally zoned for a  75,000 s/f office complex to be built by Hartz Mountain Industries, which bought up over 45-acres of the waterfront in the early 80s when the bankrupt Seatrain Lines Inc. container cargo operation went bust. The 45-acres extend from 19th Street on the south to Baldwin Avenue on the north and originally included three abandoned industrial piers.

Hartz  assembled the entire site for the mixed use development now known as Lincoln Harbor. They  built two office towers, one that is now the headquarters of UBS Financial Services, Weehawken’s largest employer. A 250-unit condo development called Riva Pointe was built on one of the piers and a 250-slip marina and hotel, now flagged by a four-star Sheraton, were added. Hartz also put in a public park and riverfront walkways,  a scattering of restaurants and convenience stores.

The site lay quiet until after the recession when apartment demand roared back to life and Hartz was ready with pre-approvals for more development. Last year they opened the Estuary rental complex and a  new Whole Foods is expected to open this spring.

Lincoln Harbor now has over 1,000  rental and condo units as well as office space and Hartz  has  said it plans to add over 567 residential units to the development.

The township purchased the site for the new pool complex from Hartz in the mid-1990’s with state of New Jersey funds, according to Turner. The $10.5 million bill for  construction  will be provided by waterfront developer fees; the State of New Jersey Department of Environmental Protection Green Acres Program; and the Hudson County Open Space Trust Fund.  Once the recreation center is open, the operating budget will be funded mostly by admission and use fees.

An infant pool as well as a splash park for children are planned for the southeast portion of the complex. The infant pool will have walk-in access and be about 14 inches deep at its maximum. Restrooms, changing buildings and a pump house will be to the northeast of the pools and splash park. Scattered between them will be tables, some with umbrellas.

There will be a 11,200 s/f ice-skating rink that  can be used for ice hockey practice and recreational ice skating in winter. During warmer seasons, the multi-use space, which will include bleachers, can be converted for roller-skating, volleyball, basketball and general public use, Turner said.

A new basketball court will be built along with a  tennis half-court and a Great Lawn, which will slope eastward for the New York City skyline view. At the top of the Great Lawn, residents will be able to enjoy a sand volleyball court alongside the river. A new pedestrian bridge will connect the existing Hudson Riverfront walkway across the lagoon to the Lincoln Harbor Park waterfront walkway.

In a statement issued by the township on Wednesday, RSC Architects said they took their cue in designing the new pool complex from a 21-member waterfront committee comprised of Weehawken residents and township officials.

“Our planning for the extension of the south end of the park took into account some of the key features that Weehawken has to offer,” said RSC senior project manager Ralph Walker. “This included connecting existing public amenities with the completion of the Riverwalk and a new bridge; taking advantage of existing views of the Hudson and Manhattan skyline through a carefully landscaped and terraced site.”

RSC president John Capazzi noted that the Waterfront Recreational Committee suggested the addition of a central lawn area as an open gathering place and ideas of how the park might be used at different times of year; how best to control access to various areas of the park; both its integration with and separation from the Riverwalk; and making sure there were multiple uses of the rink, courts and landscaped areas.

The first construction phase — which should commence by mid- to late February, weather-dependent — will require piling about 50 thousand cubic yards of new soil to both compact the existing loose soil and, raise the level of the soil where needed, to meet current floodplain standards. The new soil will set there for about four months. It’s removal will take another month. Then construction will begin.

The township is in the process of applying to the state for the necessary waterfront permits, and will be holding public presentations before the Weehawken Planning Board.