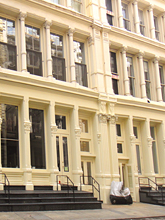 Greene street has been booming as a prime retail destination recently, successfully competing with nearby Broadway and West Broadway. The street now boasts a Stella McCartney store at 131 Greene Street and a Fjallraven store at 38 Greene Street, among others. But there is still a notable divided between the northern and southern parts of Greene Street.

Sinvin broker Sarah Shannon explained that rising rents in northern Soho are driving furniture stores like Lazzoni south. “As leases expire, furniture stores can no longer afford Greene Street towards Houston Street,” she explained. “Such stores cannot pay more than $200 per s/f, and even $175 per s/f is pushing it.”

“Greene Street north of Broome Street is now a destination for high end fashion , but there are still opportunities for furniture stores on the southern end.”