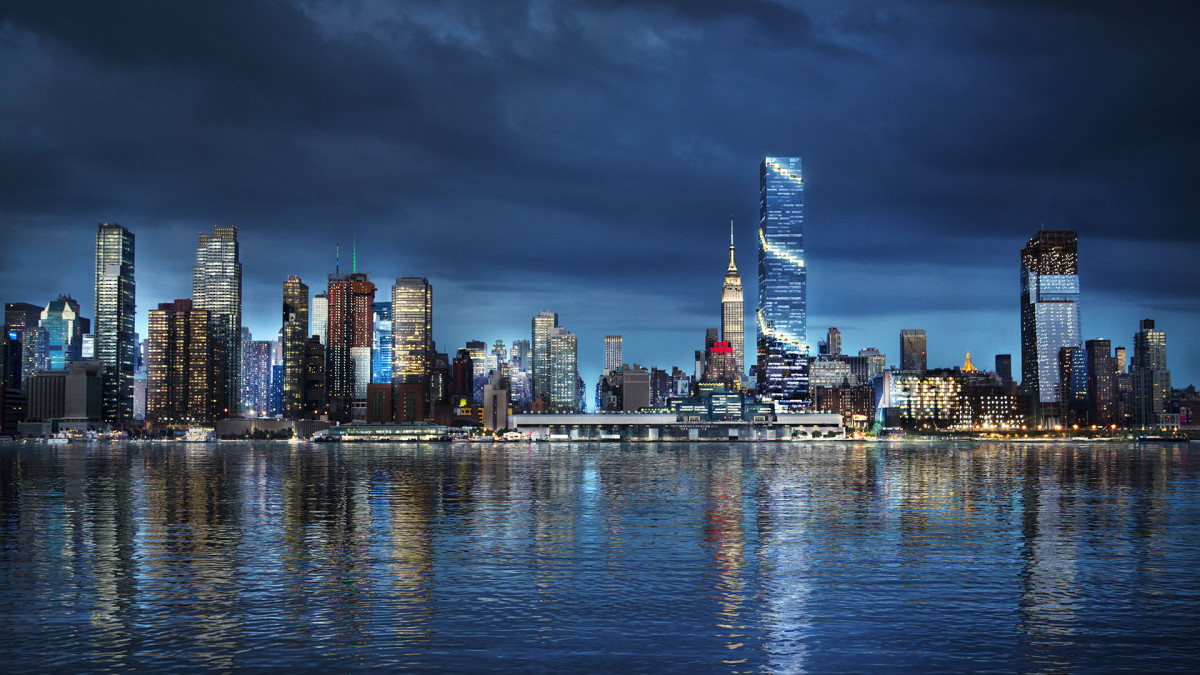 Called The Spiral, the 2.85 million square-foot tower will rise to 1,005 feet and feature a cascading series of landscaped terraces and hanging gardens as its signature element, both functionally and visually.
The terraces will ascend, one per floor, in a spiraling motion to create a unique, continuous green pathway that wraps around the façade of the tower and supplies each occupant with readily accessible outdoor space.

Located at the intersection of the High Line and the four-acre Hudson Boulevard Park, The Spiral and its cascading terraces will visually extend these new, linear green spaces vertically and literally to the sky.

Each of The Spiral’s terraces, which would measure half-a-mile if laid end-to-end, will flow seamlessly into a suite of amenity spaces featuring double-height atriums and increasingly stunning views of the skyline.
For multi-story tenants, the interior amenity spaces can be adapted to connect to multiple other office floors. This element offers an alternative to elevators, thus encouraging physical activity and enhanced interaction among colleagues.

Tishman Speyer President and CEO Rob Speyer said, “Working with Bjarke Ingels and his team, we have designed a tower that offers stunning green spaces to all and will serve as a significant leap forward in the evolution of the modern, collaborative and sustainable workplace.

“We also view The Spiral as a natural evolutionary step for Tishman Speyer and a perfect complement to our New York City portfolio, which includes such icons as Rockefeller Center and the Chrysler Building.”

BIG Founding Partner Bjarke Ingels said, “The Spiral will punctuate the northern end of the High Line, and the linear park will appear to carry through into the tower, forming an ascending ribbon of lively green spaces, extending the High Line to the skyline.

“The Spiral combines the classic Ziggurat silhouette of the premodern skyscraper with the slender proportions and efficient layouts of the modern high-rise. Designed for the people that occupy it, The Spiral ensures that every floor of the tower opens up to the outdoors creating hanging gardens and cascading atria that connect the open floor plates from the ground floor to the summit into a single uninterrupted work space. The string of terraces wrapping around the building expand the daily life of the tenants to the outside air and light.”

The tower will encompass a full-block stretching from West 34th to West 35th Streets and from 10th Avenue to the Hudson Park and Boulevard.

The development site, which is located within the Hudson Yards district, was assembled and acquired by Tishman Speyer in separate transactions in 2014. The six-story base of the building will include a lobby with ceiling heights of up to 30 feet and a main entrance opening up on Hudson Boulevard East and the adjacent park at the southwest corner of the tower at 34th Street.

The base also will include approximately 27,000 square feet of first-class retail and a spacious seventh-floor amenity terrace.

In tandem with the design unveiling, Tishman Speyer announced that it has secured more than $1 billion in equity for the project from a group of international investors.

The funding is being used to complete the acquisition of additional development rights and for ongoing design, engineering and other pre-construction costs.