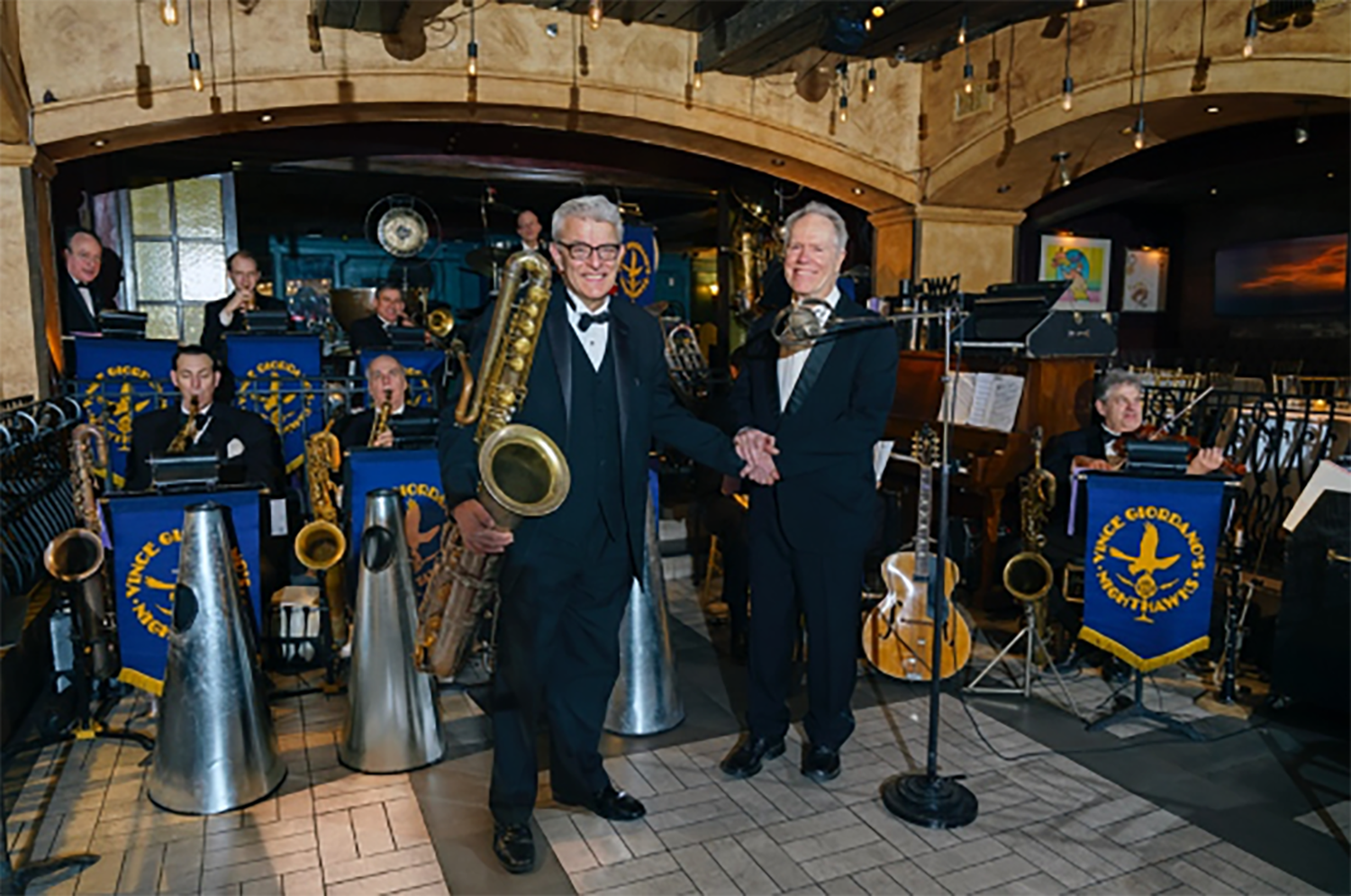 The Jazz Loft, the acclaimed museum and music venue that put Stony Brook Village on the map as a destination for Jazz education, performance and preservation, is thrilled to announce the 2022 Douglas Elliman Summer Music Series is back for the second year, featuring world renowned musicians Vince Giordano and the Nighthawks, John Pizzarelli and Peter Cincotti. Sponsored by prominent North Shore arts patrons and Douglas Elliman real estate agents Tom Postilio and Mickey Conlon, the series provides a cultural focal point for the upcoming season on Long Island.

“Mark your calendars for all three dates because you won’t want to miss any one of these incredible performances,” said Jazz Loft founder Tom Manuel. “We are beyond thrilled to announce that Vince Giordano and the Nighthawks, John Pizzarelli and Peter Cincotti will enliven the stage at The Jazz Loft this summer.”

Kicking off July 2nd, the highly anticipated series includes three monthly performances at The Jazz Loft, located at 275 Christian Avenue in Stony Brook, New York. Tickets can be purchased for individual performances or for the entire series.

On Saturday, July 2, vintage-style musical group Vince Giordano and the Nighthawks will deliver a powerful performance. The Grammy-winner, New York native and multi-instrumentalist has performed at the Newport Jazz Festival, Jazz at Lincoln Center and the 92nd Street Y. Giordano has also appeared in films including The Cotton Club, The Aviator, Finding Forrester, Revolutionary Road and Cafe Society, in addition to the HBO hit series Boardwalk Empire.

On Saturday, August 13, acclaimed Jazz Guitarist and Singer John Pizzarelli will perform a tribute to his late father Bucky Pizzarelli, the legendary jazz guitarist who inspired his career. John Pizzarelli has been hailed by the Boston Globe for “reinvigorating the Great American Songbook and re-popularizing jazz.” The Toronto Star calls him “the genial genius of the guitar” and, according to the Seattle Times, he is “a rare entertainer of the old school.” This concert also aligns with the annual three-day John Monteleone: Art of the Guitar Festival.

On Saturday, September 24, celebrated singer-songwriter Peter Cincotti will enliven the Jazz Loft’s Great Lawn for a free concert that also coincides with the Seventh Annual Harbor Jazz Festival. Cincotti has performed at the world’s most prestigious venues, including Carnegie Hall and L’Olympia in Paris, has collaborated with artists ranging from Andrea Bocelli to David Guetta, and has also been featured in blockbuster films like Spiderman 2 and Bobby Darin biopic Beyond the Sea.

The Summer Music Series is presented in partnership with Postilio and Conlon, top-producing real estate agents at Douglas Elliman Real Estate who have deep roots in entertainment as featured cast members on the hit HGTV show Selling New York, and celebrity real estate brokers to talents including Liza Minnelli, Barry Manilow, Marilyn Horne, Michael Feinstein and David Sanborn. Passionate about American music history, they are deeply committed to supporting the arts and culture scene on the North Shore of Long Island, where they have a home in the Village of Nissequogue.

The duo came up with the event concept in 2021 as a way to bring their community together following the pandemic. Grammy-nominated artist and American “musical treasure” Marilyn Maye headlined the first event and delivered a performance so unforgettable that music lovers asked for more. Postilio, Conlon and The Jazz Loft are responding to that request with this exciting announcement: the series is returning in 2022 with yet another spectacular line-up.

“Music brings people together and makes the world a better place. We are excited to collaborate with the Jazz Loft to bring another amazing concert series to the Long Island community,” said Postilio. “We look forward to meeting new friends and neighbors at The Jazz Loft this summer.”

Added Conlon, “The Jazz Loft is an institution that makes an invaluable contribution to the arts on Long Island. The culture here is what originally attracted us to the area, and we are proud to become a part of that tradition with The Summer Music Series.”

Tickets are now available for purchase on The Jazz Loft’s website at www.thejazzloft.org. You can also call the box office at (631) 751-1895. Stay informed by following @thejazzloft.tjl and @tomandmickey on Instagram.