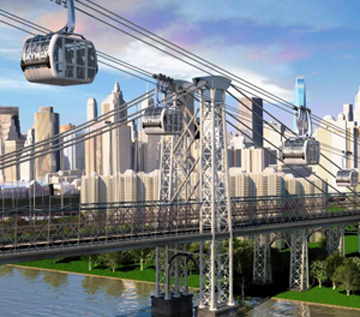 A proposed East River Skyway could ease commuter congestion between Manhattan and the booming Brooklyn market.
The first phase of the Skyway would connect the waterfront area in Williamsburg to Downtown Manhattan, South Williamsburg and the Brooklyn Navy Yard.

“Given the exciting growth in Brooklyn and Queens, it is essential to adapt New York City’s transportation system to serve residents in these booming areas,” said Daniel Levy, president of East River Skyway and CityRealty.

“Cities around the globe are recognizing the viability and efficiency of urban gondolas to overcome serious transportation challenges. An aerial transportation system would be a relatively inexpensive and quickly-deployable solution here in New York.”

Inspired by the efficiency of high-speed gondola designs and their widespread use in London, Rio de Janeiro, Germany, Singapore, and elsewhere, he said the East River Skyway is a multi-phase plan to optimize transportation to New York’s rapidly growing waterfront population centers while easing transit congestion.

With the New York City MTA reporting over 1.7 billion rides in 2013, and with many new development projects announced or underway across the five boroughs, the proposal would link areas of rapid urban development to the city’s commercial centers.

The need to provide alternative modes of transportation is especially pressing in Brooklyn, with Williamsburg alone becoming home to nearly 10,000 new residents over the last ten years.

This trend is accelerating as 5,700 residential units are added to the area’s housing stock along with an estimated 600,000 s/f of office space.
The L train, and the Bedford Avenue stop in particular, is infamously overcrowded, with a 50 percent jump in ridership since 2007. In fact, as of 2012, the line was at 110 percent capacity.

One of the possible routes for the East River Skyway could cross the East River, providing access to Brooklyn’s developing waterfront areas, and would reduce travel time by an estimated 20 – 30 minutes per trip for Brooklyn residents commuting to Manhattan.

“New York City is a natural fit for cable transit systems given its severe topographical challenges,” said Steven Dale, president of Creative Urban Projects and Cable Car Consultants, an advisor on the Skyway.

“One only need to look at the success of the Roosevelt Island Tram—the most reliable piece of transportation in New York. After Hurricane Sandy it was the first piece of fixed transportation to be operational. New gondola technology would be an effective means to address the ever-increasing traffic in Manhattan, Brooklyn and perhaps even farther afield.” Possible later phases would extend north to Greenpoint Landing, Long Island City and Midtown East and south to Dumbo and the South Street Seaport.

With zero emissions and by avoiding the challenges and decades-long lead-times posed by bridge and tunnel projects, Levy said the gondola solution would be straightforward, cost-effective, and sustainable compared with alternatives.

The Skyway would offer 360-degree views of the famous New York City skyline, transporting an estimated 5,000 travelers per hour in each direction and crossing the East River in under four minutes, appealing to both commuters and tourists alike.

Dear Mayor, we want to work with you, but …