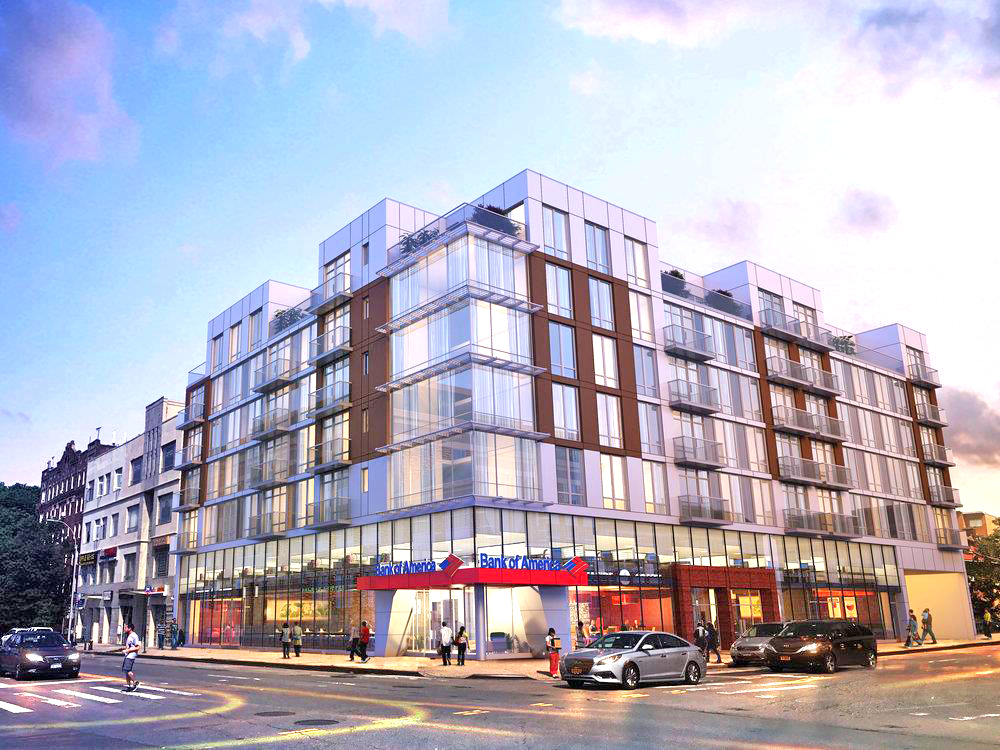 Developer NY EZ Property Holdings has paid $23 million for a development site on the corner of Northern and Parsons Boulevards in Flushing, Queens.

Cushman & Wakefield arranged the sale of 141-57 Northern Boulevard, a 22,663 s/f building currently occupied by a branch of the International Union of Operating Engineers with a Bank of America leasing the retail through 2020.
The sale will allow EZ to press ahead with plans for a 78-unit apartment building on the corner for which Angelo Ng & Anthony Ng Architects Studio, P.C. have already filed plans.

Zoning for 141-57 Northern Boulevard allows for a 67,989 s/f mixed-use development on the site, which sits next to 35-22 Parsons Boulevard, home of the First Korean Church.

Cushman’s Stephen R. Preuss and Stephen P. Palmese represented the seller of the Northern Boulevard site, which sold for $23 million.

Preuss noted, “The recent success of local projects such as The Grand at Sky View bodes well for future development as demand for new residential space continues to outpace supply.”

Eastern Consolidated announced the sale of a 7,039 s/f retail condo leased to Chase Bank and Dunkin’ Donuts.
Located at the base of the 113-unit Grand Beekman Condominium at 900 First Avenue in Midtown East,the asset traded for $10,875,000.

“This was a highly desirable investment because of the stable cash flow generated by two very strong tenants,” Ezratty said.
Tapper added, “The site attracted interest from a number of investors because of the tenancy, potential future upside, and ideal corner location just two blocks north of the United Nations in Midtown East. ”

The CBRE team of Dan Kaplan, Timothy Sheehan and Justin Arzi are marketing 66 Clinton Street on the Lower East Side for sale.

The three-story, 4,340 s/f building and an adjacent vacant lot is currently owned by the non-profit organization New Life of New York City. It allows for 16,348 buildable square feet of residential or commercial development.

Said Kaplan, “The Lower East Side is in the midst of a residential boom – projects like Essex Crossing are bringing thousands of new units to market that are attracting investors and young professionals. The zoning on Clinton Street allows for more than 16,000 square feet of development, affording the ability to create a boutique property that will meet the demand for high-end residential space in the neighborhood.”

Stephen R. Preuss represented the seller, 45-57 Realty Corp, in the transaction. The site was purchased by The Vorea Group.

“The purchase presents a tremendous opportunity to capitalize on the growing demand for multiple asset classes in Long Island City,” said Preuss.

The Clinton Pavilion, a 150,000 s/f multi-tenanted office building at 50 Clinton Street in Hempstead, has been sold for $11.75 million.

The building was purchased as a joint venture between the Alpha Equity Group and Vasco Ventures.

The new owners are planning a $3 million-plus renovation that includes a new façade with a modern architectural feel that will still preserve the character of the building.

Alpha Equity Group’s William Segal and Ephraim Vashovsky of Vasco Ventures said once complete, 50 Clinton will be the largest, most modern office building in Hempstead.

According to Sargoy, leases have been signed with New Horizon Counseling for 4,200 s/f and Graceville Seniors Club for 2,170 s/f.

Canadian investment firm has snatched up a quarter-million s/f of office space in Northern New Jersey.

Located on 11 acres near the Route 15 and Interstate 80 interchange, the complex stands seven stories and has a two-story atrium, a full-service cafeteria, covered parking spots and is walking distance from the Rockaway Townsquare shopping center.

1547 was looking for its first non-US data center as well as adding a revenue stream within the facility and a series of leads for additional business. I.C.E. Data Centers was in need of capital to expand and invest into their Metro Optics fiber company and will be leasing back the property from 1547.