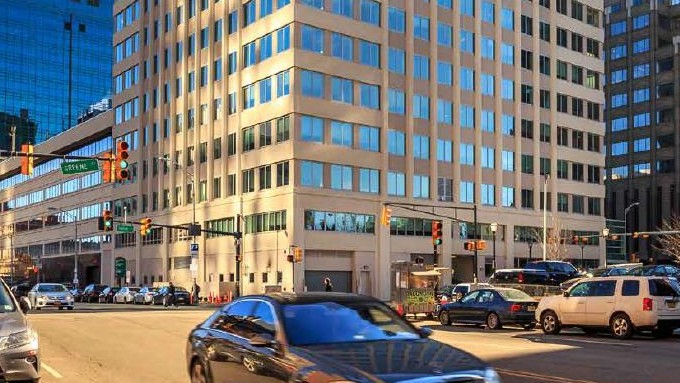 American Realty Advisors has acquired 30 Montgomery Street, a 16-story office tower on the Hudson Waterfront in Jersey City for $101 million.

The sale comes after owners Onyx Equities and Rubenstein Partners completed a $20 million renovation on the tower, one of the first completed along in the Waterfront in the 1970s. Onyx paid $52.5 million when it origianlly bought the 315,385 s/f tower in 2006.
American Realty said it was attracted to the asset because of the direct transportation link to Manhattan, as well as access to new and growing amenities.
In addition, it believes 30 Montgomery will benefit from its position as a lower rent alternative in an emerging 18-hour live/work/play location, which is similar to other emerging markets throughout the country, such as the Chicago Fulton Marketplace in which American recently acquired Google’s Midwest headquarters.
Kirk Helgeson, American’s Chief Investment Officer, said the asset is alos situated to benefit from one of America’s fastest growing residential markets.
“Jersey City is projected to add nearly 7,500 units by the end of 2017, driving additional economic growth associated with the new residents, service providers, retail, and amenities necessary to support a thriving 24/7 CBD,” said Helgeson.
He added that the company plans to stabilize occupancy in the building, which is 71.6 percent leased to 46 tenants and significantly grow cash flow by renewing and marking in-place below-market rents to market, aggressively leasing the remaining vacant office space, creating “vibrantˮ retail space at the ground floor, and investing additional capital to finish cosmetic upgrades.
The seller was represented by David Bernhaut, Andrew Merin, and Gary Gabriel of Cushman & Wakefield.

HFF has sold two senior housing properties for $98.25 million.
The Solana Roseland is located in Roseland, New Jersey and The Solana Willistown is in Willistown, Pennsylvania.
HFF marketed the offering on behalf of the seller, Formation-Shelbourne Senior Living Services, and procured an undisclosed buyer.

Madison Realty Capital (MRC) has closed on its acquisition of Saxon Hall, a 503,000 s/f mixed-use building with 419 residential rental units, 3,842 s/f of commercial space and a parking garage at 62-60 99th Street in Rego Park, Queens.
In partnership with Arel Capital, MRC purchased Saxon Hall in an off-market deal from Treetop Development for $135.5 million, representing one of the largest investment sales transactions in Queens to date in 2016.
MRC plans to pursue a capital improvement program for the property, including renovating and reconfiguring residential units, improving operating efficiencies and curb appeal, as well as enhancing and expanding the amenity package.
Josh Zegen, co-founder and managing principal of MRC, said, “Rising rents in other city submarkets have increased the appeal of Rego Park over the last few years. We have been following this neighborhood trend for some time, having served as a lender on other properties in the area such as Millennium 99 and Tuhsur Development’s condominium project.”
Steven Vegh of Westwood Capital brokered the transaction. Adam Doneger, Adam Spies, Jean Celestin and Dan O’Brien of Eastdil Secured arranged Arel Capital’s equity investment in the property. Meridian Capital advised on the financing.

Rosewood Realty Group announced the $72.15 million sale of a six-building portfolio sale in Jackson Heights, Queens featuring 324 units.
Aaron Jungreis of Rosewood Realty represented both the private investor buyer, La Mesa Verde Apartments, LLC, and the seller, Brg Queens LLC.
The six-story buildings are located at 3419-34-47 90th Street and 3418-34-46 91st Street. They were built in 1927 and total 191,808 s/f.
According to Jungreis, the portfolio sold for 15 times the current rent roll and have a four percent cap rate.

A group of private investors has paid $65 million for 61-65 West 23rd Street, a 52,000 s/f office building in the Flatiron District that’s been owned by the same family for 50 years.
Newmark Grubb Knight Frank (NGKF) Executive Managing Director Arthur Draznin and Associate Hunter Berman represented the seller, 61-65 West 23rd Street Associates LLC.
NGKF said a private investment group acquired the property for an undisclosed price. City records show the property was bought by an LLC for $65 million. Vickram Jambu and Jeremy Nazarian of Venture Capital Properties represented the “private family” buyers, they told REW.
The 52,000-square-foot office building was built in 1920 with a cast iron façade. It is located between Fifth and Sixth Avenues and near Madison Square Park, Eataly and Home Depot. The building’s largest tenant is Betterment, a financial technology company with an automated investing service that provides optimized investment returns for individual, IRA, Roth IRA & rollover 401(k) accounts.
“There is a very high demand for office space in Midtown South, particularly among TAMI companies, due to the market’s character, transit access and cachet,” said Draznin.

●MERIDIAN CAPITAL GROUP
Gentry does it in Brooklyn

Meridian Investment Sales, the commercial property sales division of Meridian Capital Group, has sold the multifamily property located at 743-755 Fenimore Avenue in Brooklyn for $16.625 million.
Meridian director Mark Steinmetz and managing director Lipa Lieberman, represented the seller, Ace Fenimore LLC, and the buyer, 743 Fenimore Associates LLC. The sale price equates approximately to a 4.2 percent cap rate.
743-755 Fenimore is a 62,740 s/f elevatored multifamily building, built in 1964, and has an alternate address of 544-566 Troy Avenue.
The seven-story property is composed of 93 rent-stabilized apartments.
“The property is located on the Eastern Boundary of Prospect-Lefferts Gardens, a gentrifying area that should see significant rent growth over the next five to 10 years,” said Steinmetz.

Shamah Properties has closed an $11.1 million deal for a six story elevator building at 880 Saint Nicholas Avenue in Hamilton Heights.

Cignature Realty’s Peter Vanderpool and Lazer Sternhell represented Shamah Properties and their principals Alan Shamah, Eddie Setton and Carl Zekaria, in the purchase of the 37-unit property.
Cignature also represented the seller, 880 St. Nick LLC. The cap rate was 3.8 percent.
Shamah Properties currently owns and manages some 25 buildings with 1,700 rental units in Brooklyn neighborhoods such as Flatbush, Crown Heights, Prospect Heights, Washington Heights and East Orange, New Jersey.
“We are excited by the acquisition of this beautiful pre-war building in such a vibrant neighborhood,” said Alan A. Shamah, CEO of Shamah Properties. “It represents a great addition to our upper Manhattan portfolio that will provide long-term value to our investors.”
Shamah has been expanding its portfolio of rent-stabilized and free-market buildings in recent years.
The company entered the Manhattan market for the first time in November 2014 with the $13.5 million purchase of 672-674 Saint Nicholas Ave, a 48-unit six-story elevator building in Hamilton Heights.
In March 2015, they purchased a $44 million eight-building Manhattan portfolio in Washington Heights with 184 rental apartments.

Cushman & Wakefield is announce the sale of three multifamily buildings located at 257 Quincy Street, 570 Jefferson Avenue and 308 Stuyvesant Avenue in  Bedford-Stuyvesant for $14.40 million.
The sale price makes a 4.24% capitalization rate and equates to approximately $432 per square foot or $313,043 per unit.
Michael Amirkhanian and DJ Johnston exclusively handled the transaction on behalf of The Mann Group.
“This was a true win for both sides. Private equity firms have successfully amassed large portfolios in the area. With the demand for multifamily properties at a high, many of these firms who historically have not been sellers see this as perfect opportunity to provide visionary, institutional shops a chance to make their
footprint in this emerging market,” said Amirkhanian.
The three buildings were originally part of a larger portfolio. The remaining properties are being sold to a separate buyer.

Zara, which views the apartments as a long-term investment, plans to upgrade the units.
Due in large part to the buildings’ proximity to mass transportation and schools, the sale price equates to $224,000 per unit — a new record for this neighborhood.
“Jamaica is seeing some exciting developments at the moment, and this sale is certainly a testament to the increasing desirability of this section of Queens,” said Katz. “In addition to the location, there are several features of these buildings that the buyer was particularly interested in, particularly the size of the units, which can easily be converted to add additional bedrooms.”
Jamaica is expected to see a surge of new demand among buyers and renters alike. Several large-scale development projects are currently in progress, including a 240-key Hilton Garden Inn, a 584-unit rental project and the conversion of the former Mary Immaculate Hospital to 324 apartments.

TerraCRG has been retained by Slate Property Group to sell a multifamily building at 457 15th Street in Brooklyn’s Park Slope neighborhood.

Adam Hess and Eddie Setton, along with their team, are marketing the property. The asking price is $10,000,000.
“The offering provides a rare opportunity for investors to acquire a large multifamily property just half a block from Prospect Park in Park Slope, one of Brooklyn’s most established sub-markets,” said Adam Hess, Partner at TerraCRG.
The multifamily building totals 13,528 s/f and is comprised of 20 rental units, of which half are free market. The unit mix is made up of five one-bedrooms, 14 two-bedrooms and one four-bedroom, two-bath duplex. All of the free-market units have been fully renovated with high-end finishes.

Walter & Samuels announced that an investment group led by chairman David I. Berley has acquired 242 West 27th Street in Chelsea for $14 million.
Situated on the campus of the Fashion Institute of Technology (FIT), the 1927 building comprises 18,000 s/f and seven floors of office space. The penthousehas a 500 s/f roof deck and there is a ground-floor loft duplex.
Eastern Consolidated’s Ben Tapper, senior director and principal, Noah Buchwald, associate director, and Ross Weiner, associate director, exclusively represented the seller, Panzel Development Associates.
Adelaide Polsinelli, senior managing director and principal with Eastern Consolidated, represented the buyer.
The building was under the same ownership for over 40 years, and “will require few upgrades,” according to Tapper.

HelmsleySpear announced that vice president Gregg B. Slotnick has sold a commercial building located at 19-40 Flushing Avenue Ridgewood, Queens for $10.5 mil;lion.
Kent M. Swig, president of HelmsleySpear, said, “We are very pleased that HelmsleySpear continues as a leader in sales in the commercial marketplace and once again congratulate Gregg on yet another deal he has closed.”
Tri-Boro Shelving, based in Farmville, Va., bought the 25,234 s/f, one-story warehouse, at $416.10 psf.
The sale was a 1031 exchange, which allowed the buyer to defer capital gain taxes after selling its Wythe Avenue building in Brooklyn for $26 million.
“This highly-successful transaction represents the strength and desirability of the commercial market in Ridgewood. This area presents buyers with a great location and highly desirable expansive space,” said Slotnick.