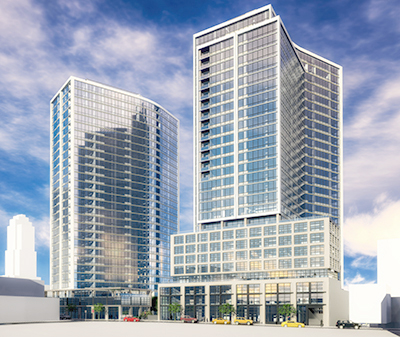 RXR Realty has begun the ground-up construction of a new 28-story development at 26 South Division Street in New Rochelle, the first of two projects being undertaken at the site.

Once completed, 26 South Division Street will feature 352 market-rate apartments, ranging from studio to one- two- and three-bedroom apartments with a valet parking garage, lounge, co-working space, speakeasy, and over 12,000 s/f of retail.

It is a major component of RXR’s redevelopment plan for the city, which included the opening of their 360 Huguenot property earlier this year. RXR also announced a new initiative aimed at building opportunities for New Rochelle’s residents with the creation of the RXR Building Community Fund at the Westchester Community Foundation.

Capitalized with a seed contribution of $225,000 from RXR, the new fund will provide grants to innovative and meaningful community programs and facilities. Administration of the RXR Building Community Fund .

At a ground breaking ceremony held in unison with New Rochelle City officials, Mayor Noam Bramson said, “26 South Division will be a major boost for New Rochelle’s economy and an important contributor to the vibrancy and success of our entire downtown.

“I applaud RXR for its commitment to community benefits, as evidenced by the launch of the Building Community Fund and by physical features of this project, including a new public plaza and public parking.”

Seth Pinsky, Executive Vice President at RXR, said, “We have always said that we believe in the incredible potential of New Rochelle. Today’s announcements represent yet more steps towards realizing this potential.”

“RXR is giving back to the City of New Rochelle in a significant way through this fund,” said Laura Rossi, Executive Director of the Westchester Community Foundation. “For a developer like RXR and for New Rochelle this is a game-changer.”

The property at 26 South Division is expected to open in late 2021.

RXR has been pursuing an updated design of a parallel project at 28 South Division Street.

However, the City of New Rochelle has asked RXR to help address the parking needs of the downtown by incorporating municipal parking on site instead of making its payment.

RXR has agreed to study a new design for the second phase and to analyze related cost estimates to determine if such an on-site option is feasible for the project. The project is expected to break ground in the summer of 2020.