Porter of the Year Award: Declan Cannon, The Durst Organization

“Those honored have gone above and beyond in demonstrating the utmost dedication to the operations of their commercial properties as well as to our community,” said John Banks, REBNY President-elect. “They comprise the foundation of our industry and we thank them for their invaluable service.” 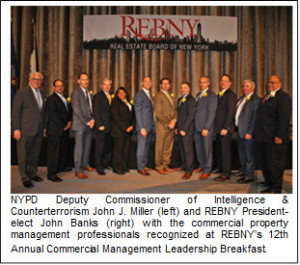 Miller’s remarks covered current topics in counterterrorism including technology such as body cameras, which are helping to exonerate officers from false claims, and the use of 20,000 hand-held smart phones, which is helping to put important safety information –– photos of lost children, suspects and possible terror threats at home and abroad –– into the hands of officers in real time.

Miller also acknowledged new training programs for officers, for example teaching them to effectively diffuse tense situations, which demonstrates the partnership of law enforcement and the private sector, particularly the real estate industry. He noted that this partnership will go a long way toward winning the war on terror. To acknowledge the efforts of Security Professional of the Year Award winner Sharon Faulkner and the many safety and security professionals, who like her are furthering New York’s efforts to win the war on terror, Miller presented Faulkner with the gold coin of the NYPD’s Intelligence Department.

Following welcome remarks by REBNY President-elect John Banks, Gaston Silva of Vornado Realty Trust and chair of REBNY’s Commercial Management Board of Directors, spearheaded the presentation of the awards.

Edward A. Riguardi of Jones Lang LaSalle presented the Edward A Riguardi Commercial Management Executive of the Year Award to Gene Boniberger, Senior Vice President and Director of Building Operations at Rudin Management Company, Inc. where he has served since 1977 in various capacities including Chief Engineer and Building Manager for several properties as well as Operations Manager and Vice President for Commercial Building Operations. Currently, as Senior Vice President of the Operations Department, Boniberger is responsible for the day-to-day operation of Rudin’s commercial and residential portfolio as well as the MEP aspects of all new construction projects. Additionally, he serves as a board member for Donate Eight, an affiliate of the New York Organ Donors Network, and on REBNY’s Management Division Board of Directors, Commercial Council, Residential Council and Sustainability Committee.

Michael Griffin, representing the Griffin family, presented the John M. Griffin Community Service Award to William Dacunto, Executive Vice President of Operations at Silverstein Properties, Inc., who is revered by his peers as an upstanding and accomplished member of the community who is well known and respected in the industry. In addition to serving as head of Silverstein’s building operations and his more than 30 years of experience in property management, Dacunto serves on the board of directors for Donate Eight and is active in organizing blood drives, City harvest food drives and other charitable endeavors at Silverstein Properties.

The award for On-Site Manager of the Year was presented to Enzo Paternostro, General Property Manager at Hines. Paternostro has served as the onsite property manager at 750 Seventh Avenue for almost a decade and is noted for consistently setting the standard as the flagship of excellence in Hines’ portfolio. He was instrumental in supporting and guiding the $485 million sale of the 600,000-square-foot office tower in 2011, and credited with galvanizing his team to provide the highest level of service to maintain the asset and ensure the expansion and renewal of anchor tenant, Morgan Stanley, under the new ownership.

Michael Prunty, Vice President of Property Management at Empire State Realty Trust Inc., was presented with the Corporate Management Executive of the Year Award. Prunty overseas Empire Realty Trust’s property managers and is acknowledged for his tireless work through great challenges. He is credited with guiding a seamless transition during the firm’s public offering and consolidation in 2013, which involved unifying and standardizing procedures for Empire Realty Trust’s New York and Connecticut office and retail properties.

The Engineer of the Year Awards were presented by Howard Styles of Local 94. James Hollywood, Chief Engineer at SL Green Realty Corp.’s 120 West 45th Street, also known as Tower 45, received the Small Building Engineer of the Year Award. The 26-year property management veteran, who has been a member of the engineers union Local 94 since 1989 and part of the SL Green family since 2008, is recognized for his professionalism, high quality performance, positive attitude and demonstrated integrity, compassion and dedication to his job and family. He also played a major role in 120 West 45th Street winning the 2008 BOMA Pinnacle Award for “Operating Building of the Year.”

The Large Building Engineer of the Year Award was presented to Richard Kromar, Chief Engineer at Boston Properties LP’s 601 Lexington Avenue, also known as CitiCorp Center. After launching his career as an Engineer’s Helper at One World Trade Center in 1986, Kromar, who is also a long-term member of the engineers union Local 94, worked his way up to Chief Engineer at 280 Park Avenue before becoming the Chief Engineer at 601 Lexington Avenue, where he has achieved significant cost savings in maintenance and operations and demonstrated steadfast leadership and devotion to tenants and the asset during Hurricane Sandy.

The Security Professional of the Year Award was presented to Sharon Faulkner, Emergency Action Plan Director at Paramount Group, Inc.’s 712 Fifth Avenue. Faulkner is involved in every aspect of security and safety at the property; acknowledged by her peers for her strong tenant relationships, sincerity, proficiency and integrity; and acts as a property management liaison for the building’s security and messenger center contractors, supervising security personnel and overseeing tenant and building staff fire drills and training. Ms. Faulkner showed her dedication to protecting the building when she rushed to 712 Fifth Avenue in the middle of the night after hearing a car had crashed into the building.  She is also frequently called upon to train security professionals in other buildings owned by Paramount Group.

Hector J. Figueroa of 32BJ SEIU presented the Porter of the Year Award to Declan Cannon, Head Porter at The Durst Organization’s 655 Third Avenue. Throughout his 22 years of service with The Durst Organization, Cannon has set himself apart through his dedication to the property, its cleaning department, and his demonstrated support for the building’s engineers, construction crews, and tenants.

The Rising Star of the Year, Daniel Ruanova, Property Manager at Vornado Realty Trust’s 770 Broadway, was applauded for his rapid career development and professionalism. Over the course of his eight years of service at Vornado, Ruanova has played a significant role in the full redevelopment of 880 Madison Avenue and securing notable leases at the property. He is noted for his diverse skill set and ability to keep pace with the fundamentals of building effective tenant, contractor and professional relationships.

Thomas L. Hill of Boston Properties LP announced the winner of the coveted Best Engine Room of the Year Award, The Durst Organization’s One Bryant Park.