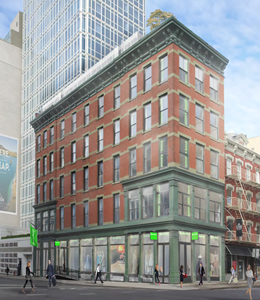 The company announced the deal among a series of loan transactions across New York, Arizona, Utah, Florida, North Carolina, and California totaling $100 million.

The New York loan is for the refinance, renovation, and stabilization of an approximately 27,600 s/f mixed-use, office / retail property, located in the Soho submarket. The company declined to identify the property but did supply a rendering (pictured top).

The sponsor signed a lease with a co-working office tenant that will occupy a portion of the building upon completion of the planned capital improvements.