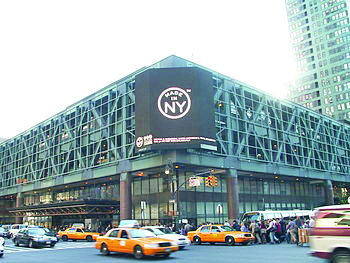 The Port Authority of New York and New Jersey has been using its Midtown bus terminal for the past 65 years, and recently announced that it is actively taking steps to address the numerous problems plaguing its aging terminal.

This week I’d like to talk about and raise awareness of some of the problems facing the Port Authority’s bus terminal, and explain why these improvements are so important to its continued operation.

Despite, its expansion in 1979, the terminal is severely overcrowded. Addressing this problem is critical for our city as more than 51 percent of commuters coming into New York arrive by bus–more than rail, PATH or ferry. Over the next 25 years, the Port Authority projects a 17 percent growth in bus riders. In short, addressing this growth is vital to the continued expansion of our economy.

Unfortunately, because of a number of factors such as its age, location, and infrastructure, it is facing many of the same problems faced by Penn Station which I discussed in an earlier column.

At its opening, this bus terminal was designed to better accommodate the growth in bus traffic and get many of these buses off the streets in the surrounding neighborhood. As a result of the continuing growth of our city, the Port Authority Bus Terminal is quite simply at capacity and we are seeing our local streets crowded with buses.

Due to the lack of space, not only is there overcrowding during peak hours, but there is also a lack of storage space for the buses. Because of this, there are times when the Port Authority’s buses are forced to idly drive around the city until their next departure.

Needless to say, this has several negative consequences, including pointless additional traffic congestion, unnecessary wear and tear on the city’s roadways, an utter waste of gasoline at a time when gas prices are reaching record highs, and many more.

Luckily, these important issues are not lost on the Port Authority. In fact, it recently approved spending $90 million towards repairing the 42nd Street bus terminal, which its new Chairman John Degnan projects could take as long as 15 years. These improvements will focus on cellular service and other communications services, congestion, on-time performance, customer service, and building conditions.

“The functionally obsolete facility no longer meets the transportation needs of the hundreds of thousands of riders that pass through the terminal every day,” the Port Authority said in a press release. “The Port Authority is committed to identifying comprehensive improvements with the context of its existing Capital Plan. This initiative will make interim improvements to the terminal as the agency explores a program to deliver a redeveloped facility.”

Recently, REBNY has supported the Port Authority’s request for federal funds to build a bus storage facility on 11th Avenue, between 40th and 42st Streets. This new terminal will provide resiliency to our bus network and help alleviate the bus congestion on the streets around the terminal during the evening rush.

The proposed Galvin Terminal will be an important and needed complement to the renovation work proposed at the PABT. However, we must continue to find ways to improve bus service for New York employees on the west side of the Hudson River and continue to invest in our bus system.

REBNY commends the Port Authority for the outstanding job it has done for our city as it nears its 100th anniversary, and offers its encouragement in the coming years as it strives to improve upon its already exemplary performance. Institutions like the Port Authority are a keystone in what keeps the city’s wheels turning, and it is extremely pleasing to see it doing the best it can in terms of operating as efficiently as possible.

In other REBNY news:
August 12-13 from 9:00am – 5:30pm is the Certified Buyer Representative (CBR) Course. This two-day course, a national trademarked designation of REALNET Learning Services, is facilitated by REBNY and is available to those who wish to differentiate themselves with advanced training in buyer representation. This course takes place in the REBNY Mendik Education Center.
August 14 is the annual REBNY Spring Golf & Tennis Outing at the North Shore Country Club in Glen Head, a fun-filled day during which attendees will be able to network with each other and have a good time. Golf is $425, tennis is $315 and includes singles and doubles brunch, all-day is $225, dinner-only is $150, and a swimming pool is available to all. Each package includes cocktails and dinner, and sponsorships are available. For more information, contact Kathleen Gibbs at 212-616-5246, or kgibbs@rebny.com.
August 20 from 9:00am – 10:30am is REBNY’s Residential Ethics Course for New Members, a non-credit course required for new REBNY members. To register, visit REBNY.com, or contact ResidentialEthicsCourse@REBNY.com.