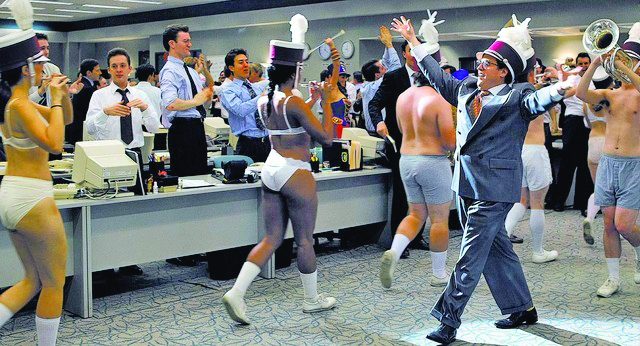 In the age of smartphones and social media, there are already enough distractions for office workers to avoid. Add the sounds emitted from a boisterous swingers club to the mix and productivity is as good as dead.

At 27 Cliff Street in the Financial District, the Amsterdam Society is “shaking things up,” by hosting loud sex parties while neighboring commercial tenants attempt to conduct business.

According to reports, the building’s traditional business tenants have voiced their displeasure and in response, the landlord has opted to pursue legal action against the club with hopes of evicting them.

“If you’re the landlord, you have to go back to what your lease says,ˮ according to Adam Bailey, of Adam Leitman Bailey, P.C.

“One thing that every lease states is that you have to follow all New York laws. If they’re causing a ruckus, the city may come in and try to shut them down.”

Unfortunately for the landlord, Alpina International Co., that route isn’t likely the solution.

Law enforcement reportedly visited the club in September but found no evidence of prostitution on the premises as patrons were only paying for access to the party. Despite the apparent lack of illegal activity, the landlord could take action to evict, according to the experts. Reports indicate that The Amsterdam Society presented itself as a video production company when it signed its lease.

“That’s a basis for a lawsuit,” said Bailey. “If the used clause says that you’re going to do one type of business and you’re doing another, that would be grounds for litigation.”

Jamie Heiberger-Jacobsen, of Heiberger & Associates, P.C. recently represented a landlord in the East Village who learned that a tenant was offering clients sex acts for money, despite claiming to be a legitimate business when signing the lease.

“Mine was pretending to be a spa, but it was an illegal massage parlor,” she told Real Estate Weekly before pointing out that the clear-cut proof of prostitution made this particular case a bit more straight forward.

Though it may lack concrete proof of illegal activity, Heiberger-Jacobson agreed with Bailey, that Alpina will have a legitimate case if it continues to try to evict Amsterdam.

Jacobsen said, “In most commercial leases, the very second paragraph is going to state the use and, if they said it’s video production and it’s not really a video production company, then that’s grounds for expulsion.

“Any time a commercial tenant is violating a provision of their lease, the landlord has the right to commence an action. Normally you need to serve a notice to cure rather than going straight to a termination notice unless there was illegal activity to be found.”

The tenant could fight back with a Yellowstone injunction, said Jacobsen, which essentially buys a tenant time to either properly address and remedy the alleged violations or prepare a case that will “get down to the merits of the underlying issue” and perhaps successfully defend its behavior in court.

27 Cliff Street can claim 21,520 s/f of space amongst its five stories. At press time, four offices in the building were available for rent. The landlord was unavailable for comment.

Zell swears that foreigners are not responsible for driving up prices