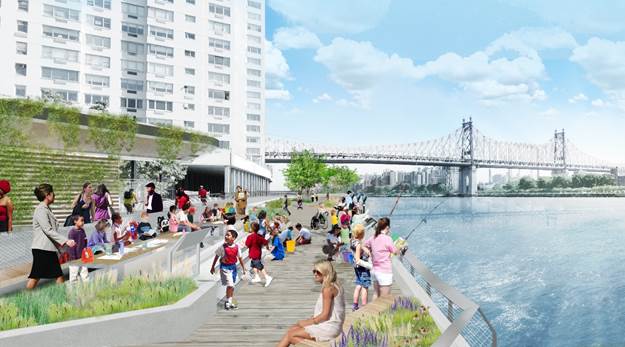 Next step on East Side Greenway plan

The formal design process for a new section of the Manhattan Waterfront Greenway between East 61st Street and East 53rd Street will officially kick off next week.

Joined by local officials to tour a portion of the existing greenway and discuss plans for its expansion, Mayor Bill de Blasio said construction of the new segment will commence in 2019, with completion expected in 2022.

“The Manhattan Greenway stands out as open space that connects communities to one another and also to New York’s expansive and beautiful waterfront. Closing this gap will vastly improve quality of life for New Yorkers, and for East Siders who’ve advocated for decades to get this done,” said the Mayor.

“For years East Side residents have looked at the Hudson River Park and wondered w hy they didn’t have that same type of world class greenway all along the East River,” said NYCEDC President James Patchett.

“Today we take a major step towards changing that reality, and delivering on Mayor de Blasio’s vision for a fully connected Manhattan greenway. Creating this kind of waterfront access is central to EDC’s mission of creating strong neighborhoods and building an even more vibrant city.”

In April of this year, the Mayor dedicated $100 million in City capital to significantly narrow the Greenway’s largest gap as part of an administration-wide push to complete a contiguous 32-mile waterfront pedestrian promenade and bicycling path around the whole of Manhattan.

The Mayor’s announcement came as a response to a longstanding effort by local elected officials and community advocates to fund and build a continuous esplanade to close the gap.

The project has received initial approval from the US Coast Guard, Army Corps of Engineers, and State Department of Environmental Conservation. The structure will be based on plans previously developed in consultation with a board composed of Mayoral representatives and local officials.

Manhattan Borough President Gale A. Brewer, said, “With Mayor de Blasio’s help, we are closing the gap from 53rd Street to 61st Street, and are that much closer to encircling all of Manhattan’s 32 miles of waterfront with biking, jogging, and open space for residents and tourists alike to enjoy.”

U.S. Representative Carolyn B. Maloney, added, “East Midtown desperately needs more parks and open space, and this new greenway will be a beautiful way for people to enjoy the waterfront.”

Since its inception in 1993 under Mayor David Dinkins, each administration has contributed to Manhattan Waterfront Greenway.

The last major section of the Greenway to open was a 10-block pile-supported Riverwalk built in Riverside Park on the West Side between West 81st and West 91st streets, completing a contiguous 11-mile Hudson River Greenway from the Battery to the George Washington Bridge. With more than 7,000 daily cyclists, it is the busiest bike path in the United States.

The Mayor’s Executive Budget also dedicated $5 million for a multi-agency study to be completed this year of the remaining gaps in the Manhattan Waterfront Greenway. The study will identify solutions necessary to upgrade existing pinch points and complete gaps, as the basis for additional funding in the next update of the City’s capital plan.