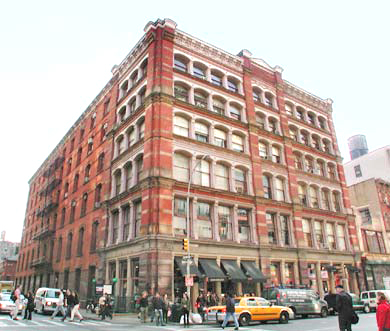 TD Bank and BNY Mellon provided the financing for the company, led by Jeffrey Gural, Eric Gural and Brian Steinwurtzel.

The funding will be used for a major capital improvement plan that will reposition and upgrade the property.

The property, which Newmark Holdings purchased in 1986, is currently 100 percent leased with a roster of prominent tenants that includes Converse, Dean & Deluca, and Lerer Hippeau Ventures.

“We were able to secure a fixed rate below 3.5% for 10 years in a volatile lending environment with credit spreads increasing,” said Paul Talbot, senior managing director, who represented Newmark Holdings on the loan.

“The refinancing of 560 Broadway is the first step in repositioning the building,” added Steinwurtzel, principal for Newmark Holdings.

“SoHo remains one of the premier luxury districts in Manhattan and the area immediately surrounding 560 Broadway continues to be one of the most sought-after locales in this neighborhood.”

Built by Willam B. Astor II in 1884 as a store, the Thomas Stent designed property has a Neo-Grec detailed façade spanning ten bays on Broadway, fourteen bays on Prince Street and ten bays on Crosby Street.