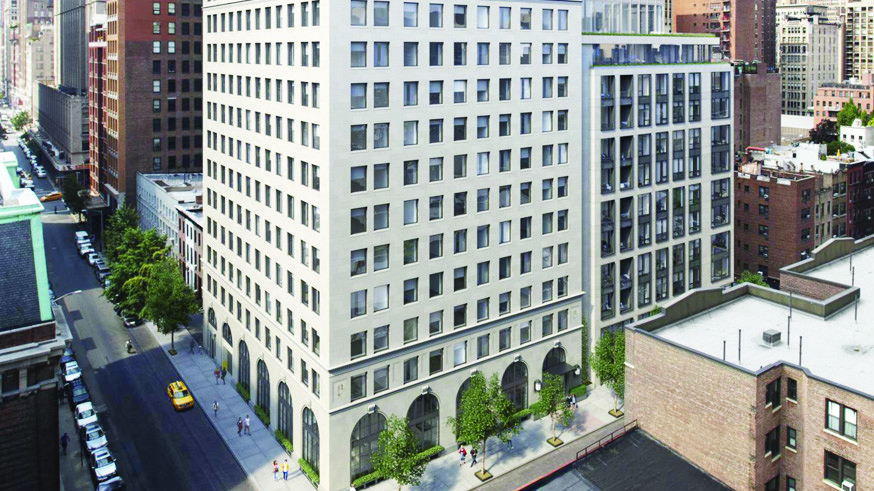 Newest luxury building making itself at home in NoMad

“I think this is the blueprint that other luxury buildings, and other buildings of maybe slightly less standard, will want to live up to,” said Maureen Rogers, the sales director for 88 & 90 Lex.

Rogers believes that the building is a worthy contender because it was converted with the goal of outshining neighboring high-end developments.

“Very few, if any, buildings in the city are offering what we have here,” Rogers said.

The building has a price range of $1.4 million to $9 million and contains 118 units (four units less than the previously reported figure).

The units, as Rogers describes them, “speak to a lifestyle” and come with large windows, ceiling heights between 10 to 16 feet and open kitchens.

The finishes, which are said to be in “soft, gray tones,” are consistent between the two buildings. There are just a few minor differences in the contents of the condos. Units in 88 Lex have large, single-light casement windows while 90 Lex condos have floor-to-ceiling windows.

Outside of the units, tenants have 8,000 s/f of amenities at their disposal, which includes a fitness center, a screening room and a resident’s lounge. All of these will be enclosed within 88 & 90 Lex’s Art Deco facade and glass-curtain walls.

Rogers says that the biggest advantage that the property provides is its location, particularly its proximity to Gramercy Park and a burgeoning food scene.

The building falls under a number of jurisdictions. Technically, it’s NoMad. However, it also falls under a 10-block long stretch known as Midtown South.

The area, which has housed a number of restaurant and bar openings, is starting to become one of the most expensive places in the city. According to StreetEasy, median sale prices in the area rose 74 percent to $1.19 million in 2014.

HFZ Capital, the developer of the property, acquired 88 Lexington Avenue in 2013. At the time of the purchase, it was a rental building that contained 177 units.

90 Lexington Avenue was bought for $55 million in the same year. Before the conversion, it contained 105 units with an average listing price of $1840 per s/f.

Most of the original structure was retained during the conversion, only the façade of 90 Lex was replaced. According to Rogers, closings will start on the first quarter of 2016.

The renovated structure, which was designed by Workshop/APD, is adding to the increasing number of high-end residential options in the Midtown South area.

It is just a few blocks from 45 East 22nd Street, a luxury apartment building from Ian Bruce Eichner’s Continuum Company. Once it’s built, Eichner’s 65-story building will stand 777 feet tall, making it the biggest in the Flatiron district.

Another nearby tower is 404 Park Avenue South. The building, which has stands at 40 stories, has penthouses that cost between $6.75 million to $10 million.