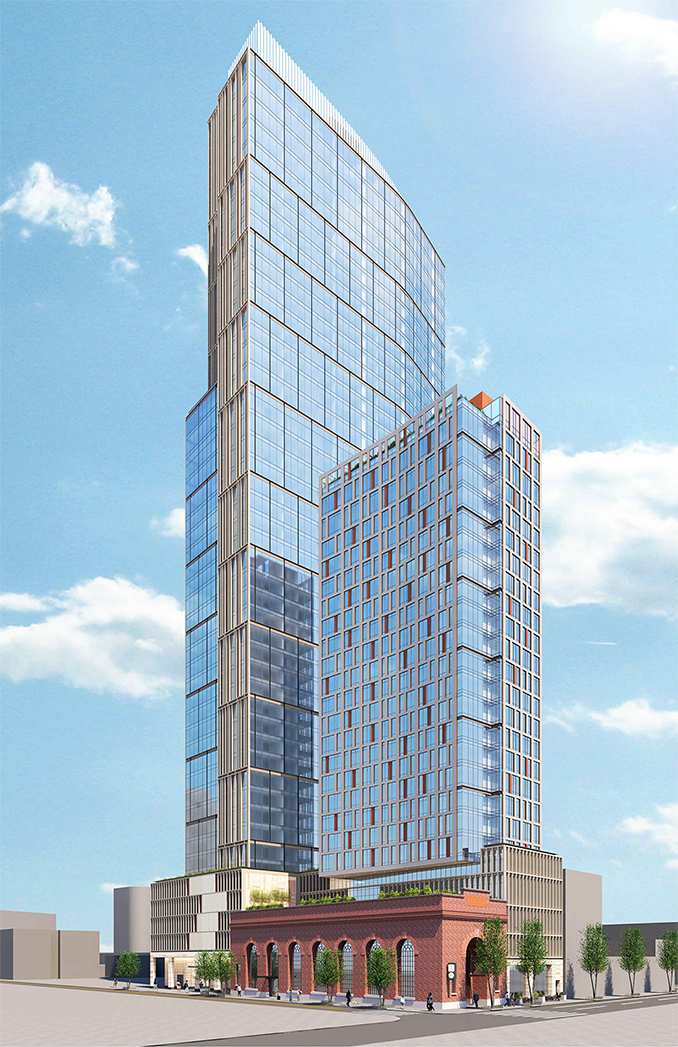 Marking the latest milestone in the historic revitalization of its downtown district, the City of New Rochelle has given final approval to the construction of an 800,0000 s/f mixed-used development at 11 Lawton Street on the corner of Main Street.

The project will consist of a 22-story, 190-room hotel and a 48-story residential tower featuring 143 condominium units and 453 rental apartments, 60 of which will be designated as affordable.

The design of the hotel’s podium will incorporate the adaptive reuse of the historic National City Bank of New Rochelle building, which was designed by architect Henry Bacon and constructed in 1906.

The overall development will also include 8,102 s/f of restaurant and bar space, 2,953 s/f of retail and 627 on-site parking spaces.

“We are particularly pleased to diversify our housing stock with the first new condominiums approved within the downtown overlay. In short, this is among the most significant projects in New Rochelle’s history, and one that will meaningful advance our efforts to create a thriving, attractive, and sustainable city center.”

The property — developed by DB Main and 11 Lawton, LLC, based out of San Francisco, and designed by Hill West Architects of New York City — will stand as a focal point of New Rochelle’s new Downtown Overlay Zone, a 279-acre tract now undergoing a large-scale transformation on schedule to attract $6.7 billion in public-private investment.

“11 Lawton will be a centerpiece in the City’s ongoing redevelopment effort, and the crown jewel of downtown” said Chip Erickson, representative of DB Main and Lawton, LLC.

“We are very proud of what we have produced in concert with City Staff and community stakeholders, and look forward to realizing the community’s vision for this site.”

The revitalization expects to attract between 12,000 and 15,000 new residents to the downtown area.

“This project is a key ingredient in the downtown revitalization as it adds significantly to the district’s residential options,” said Luiz Aragon, New Rochelle’s Commissioner of Development.

“Additionally, the new hotel fleshes out downtown’s growing hospitality infrastructure in a way that serves the business community, accommodates conference planners, and supports the expansion of tourism.”

New Rochelle’s unprecedented redevelopment initiative — one of the largest and most significant economic development initiatives in Westchester County history — was launched in 2015 with the signing of a Master Developer agreement with RXR Realty, a real estate owner, manager, and developer.

So far, 28 projects – totaling approximately three million square feet and more than 6,000 housing units – have been approved, and eleven projects are already under construction.