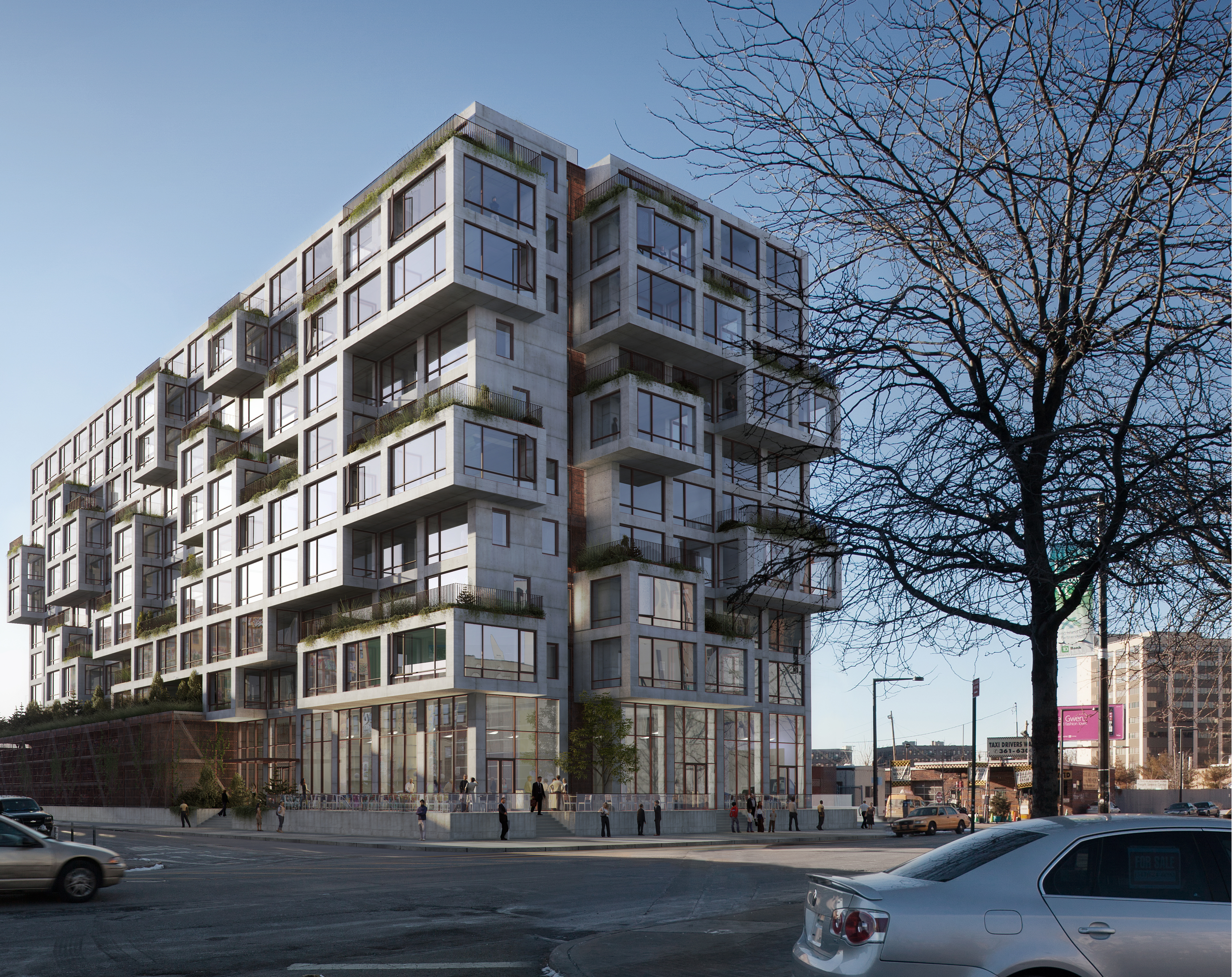 ODA New York, the architecture firm behind 2222 Jackson, recently received an award in the 2016 Society of American Registered Architects (SARA) Design Awards Program (Housing category) for its work on the building.

The 11-story property has 175 studio through three-bedroom apartments.

Situated across the street from MoMA PS1, the building has a triple-height lobby with a doorman. Each floor has a floor-to-ceiling windowed hallway and amenities include a third floor club with a fitness center, swimming pool, landscaped terrace and a lounge with televisions and ping-pong.

There is also on-site valet parking, an onsite resident manager, and a roof deck. There are washers/dryers on every floor as well as in the larger units.

“We are thrilled with prospective renters’ excitement about 2222 Jackson since leasing began,” said Brian Weiss, partner of Triumph Property Group and head of on-site leasing.

“It affirms what we have known for awhile; that renters are responding to impeccable attention to detail, design and location, and understand that 2222 Jackson achieves all three.”
Rents ranges from $2,350 to more than $6,350 per month.

Dunn Development Corp. and L+M Development Partners, Inc. announced that closings are underway at The Condos at Navy Green.

The new sustainably-designed new condominium is located at 8 Vanderbilt Ave. on the border of Fort Greene and Clinton Hill across from the Brooklyn Navy Yard.

Halstead Property Development Marketing is marketing the condos, part of the Navy Green collection of 98 condo and 23 townhouses.

“Since launch of sales, the feedback we’ve received on the Condos at Navy Green has been remarkable,” said Tell Metzger of L+M Development Partners, Inc.

The energy-efficient condos feature open layouts; five-inch plank, white oak flooring throughout; Kitchen Aid and Bosch kitchen appliances; and Grohe fittings in the baths. Select units will also include a terrace, but all have access to the landscaped roof deck.

The central courtyard that gives Navy Green its name offers all residents a multitude of options for enjoying nature and the outdoors.

There are gardens, a children’s playground, seating areas and an open lawn. Amenities at the 12-story condo building also include a landscaped roof deck with views of the East River, Manhattan and downtown Brooklyn; a fitness center; a laundry room; an on-site super; cloud-based smart intercom system; storage units; cold storage; and bike storage. In addition residents can take advantage of an anticipated 25-year 421-a tax abatement.

Poskanzer Skott Architects’ has released renderings of their new design for Embankment House in Jersey City.

Developed by Newport Associates Development Company, a subsidiary of LeFrak , the seven-story structure currently under construction will have 163 apartments.

According to the architects, the new building will have the look of a retrofit of a historic warehouse or manufacturing facility, complementing the neighborhood while preserving a bit of local history.

Situated on an old railroad embankment that fronts 10th Street, the Poskanzer Skott team embraced the challenge of incorporating the embankment, using the existing stone as a visual base for the new construction.

One entry to the building’s two-story lobby is set into the embankment at street level, while a second allows access from the parking lot situated atop the embankment and invisible from the street.
Poskanzer Skott has partnered with LeFrak for more than 15 years, during which time it has completed the design of over 800 multifamily units and more than three million square feet of office space for the developer.

275 South signals the start of a new relationship for Nelson Management Group, its investment arm Global One Investments, and Bold New York.

The firm was enlisted to quicken leasing for the building after several units were renovated to complement the recently announced capital improvements to the property.
Led by Melanie Krakower, director of development, BOLD’s team will take a hands-on role to help reposition the asset.
“The team at BOLD is digitally savvy and in tune with LES culture. That resonates with residents looking in the neighborhood,” said Joseph Weishaar, director of Asset Mangement at L+M Development Partners.
275 South amenities will include a new roof deck, co-working space / lounge cafe, and a larger gym facing the water.

As construction workers completed its 50th story, Rockrose Development Corp. celebrated the topping out of The Hayden, its 974-unit residential tower at 43-25 Hunter Street in Court Square, Long Island City.
The Hayden will be NYC’s largest “80/20” project constructed outside of Manhattan. Twenty percent of its units, or 195 apartments, will be offered as affordable housing units; the remainder will be market rate rentals.

The building is being constructed under the now-expired 421-A Affordable Housing Program.
Justin Elghanayan, President of Rockrose, said, “In just the last five years, Court Square has witnessed a spectacular demand for new housing. The Hayden’s next door neighbor, Rockrose’s 709-unit Linc LIC, was fully leased within a year after its opening in 2013. We anticipate an equally enthusiastic response from apartment seekers for this amenity-rich project.”

The Hayden comprises 970,000 square feet, with 19,400 s/f of retail space on its ground floor.The expected completion date is the first quarter of 2017.
It will be one of Queens’ tallest structures and include 348 studio, 459 one-bedroom, and 167 two-bedroom apartments.

There will be two rooftop terraces and 18,000 s/f of amenities, including a fitness center, basketball court, billiard room, rooftop solarium and great lawn, library and a children’s playroom.

The homes include three 1,313 square foot two-bedroom, full-floor residences, an 1,840 square foot duplex penthouse, and a three-bedroom maisonette that measures up to 3,585 square feet including its own private parking garage. Pricing ranges from $2,495,000 to $5,995,000.

Toll Brothers: We’re not worried about a luxury market lull

Getting the best out of a market shift