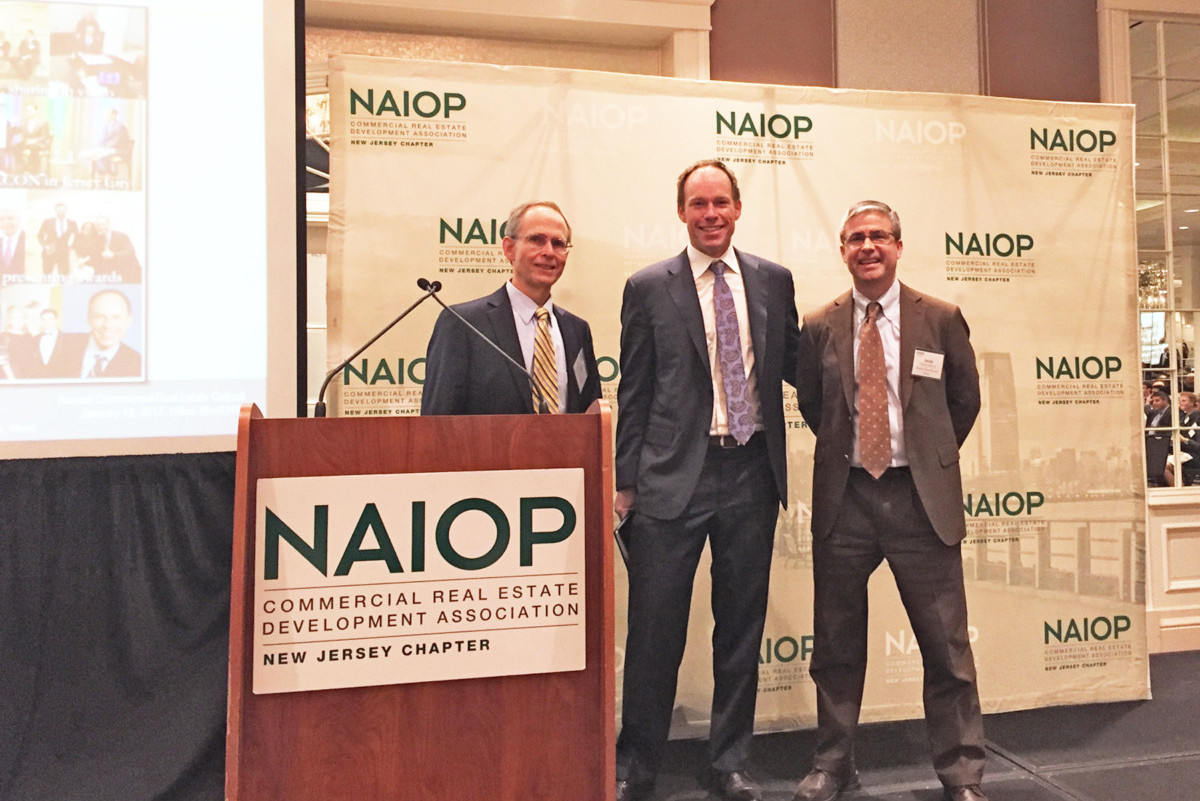 The Trump administration’s impact on the economy and how emerging tech innovations can transform commercial real estate were some of the issues addressed at NAIOP New Jersey’s Annual Meeting and Commercial Real Estate Outlook, held at the Short Hills Hilton.

Dave Gibbons of Elberon Development Group, who assumed the role of chapter president from The Rockefeller Group’s Clark Machemer, said, “We have a big year ahead, with the governorship and all 120 seats in the state legislature up for election in November. With over 740 members, NAIOP NJ is one of the largest chapters in the country, and we will continue to use our voice to advocate for policies that support the health of the commercial real estate market.”

“In 2016, the U.S. economy saw moderate growth that was strong enough to fill our space and encourage investor demand for our products,” said Nelson. “It was not so strong as to overheat markets and encourage a lot of speculative construction that would ultimately undermine the recovery.”

While this growth expected to continue for another year or two, there are indications that the economy is nearing the end of its current expansion. “This cycle has lasted over seven years and is one of the longest in U.S. history,” said Nelson. “But the longer you are growing, the greater the likelihood that something will dislodge.”

The uncertainty surrounding the outcome of the presidential election could mean the economy and the industry will face some choppy waters. However, Nelson says there are signs of optimism.

“President Trump is inheriting a solid economy that has essentially healed from the great recession. We are no longer in recovery, we are in expansion. Home prices are up, jobs are back and consumer debt levels are down.” He noted that all areas of the country have not shared evenly in the recovery. Wage growth has been flat until recently and the strong dollar has held down manufacturing and imports.

Nelson believes the expansion could be lengthened by several of the new administration’s proposals, which have the potential to spur economic and job growth in the next few years. He cited President Trump’s proposed stimulus package of tax cuts and infrastructure spending, and efforts to create a more business-friendly tax and regulatory environment as examples.

In New Jersey, this could benefit the pharmaceutical and financial services sectors, the latter of which has experienced a lag in job growth in recent years. The stimulus would also be good news for most property sectors, especially the office market, as the financial sector typically leases more office space than any other.

New Jersey’s industrial sector is outperforming the U.S., benefitting from the growth in ecommerce at the expense of traditional retail.

Nelson noted that it remains to be seen how proposed trade policy changes and tax cuts will impact retailers, particularly those that rely heavily on imports. And while the multifamily market continues to enjoy below-average vacancy rates, investors should anticipate higher interest rates as a result of reduced financial regulations.

With its 2016 acquisition of solar-energy company SolarCity, Tesla is producing solar tiles that will be available commercially later this year.

“The cost of a solar tile roof is similar to a traditional roof, and you’re offsetting your energy costs by installing a functional roof,” he noted. The company’s Powerpack and Powerwall 2, battery systems that integrate with solar to provide energy for home and commercial use, offer unlimited scalability for any size project.