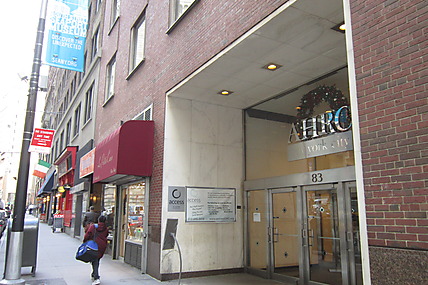 Helmsley Spear has brokered a new retail lease in FiDi, totaling 4,170 s/f at 83 Maiden Lane with the restaurant and brewery known as MezCali.

Helmsley Spear serves as the exclusive leasing and managing agent on behalf of AHRC NYC, the owner of 83 Maiden Lane, a 170,000 s/f commercial office building.

• Burger Inc. will open its second NYC location at 135 North Street in Williamsburg, Brooklyn. The company, which operates a Chelsea outpost, signed a 10-year lease for 1,000 s/f of retail space at $120 psf. Max Lu of MCRE represented the landlord. Jeff Goncalves, MCRE, represented the tenant.

• A new casual dim sum restaurant signed a 1,000 s/f lease for retail space at 135 North 5th Street. Asking rent in the 10-year deal was $120 psf. Max Lu represented the landlord and the tenant.

• Jeff Goncalves brokered a long-term lease for 3,000 s/f at 1489 Fulton Street in Williamsburg for a new retaurant, bar and event space. Asking rent was $48 psf.

• A fast casual burger restaurant will build out the space at 400 Troutman Street in Bushwick neighborhood. Max Lu represented the landlord and the tenant in the 1,000 s/f lease. Asking rent was $80 psf.

• Operators of the Ethiopian restaurant chain Awash will open a new restaurant with a new name at 739 Franklin Avenue in Crown Heights, Brooklyn. Jeff Goncalves represented both the landlord 739 Franklin LLC and the tenant in the long-term lease of 1,400 s/f. Asking rent was $64 psf.

With sales offices and subsidiaries throughout the world, 777 Northrop Road will serve as Radiall’s regional headquarters. John Usdan, CEO of Midwood Investment & Development, made the announcement. 777 Northrop Road was built by Midwood in 1999 and is one of four of the firm’s commercial spaces in Connecticut.

Located near I-91, the space was previously occupied for 16 years by Webster Bank as back-office operations. David Barnes from CBRE represented Midwood and James Pancyzkowski and John Stoddard from JLL represented Radiall.