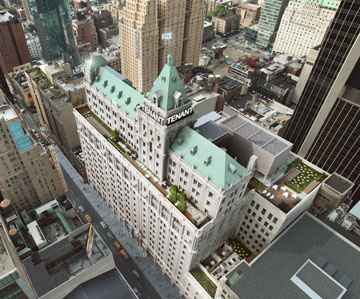 Another tech tenant has leased space at the former New York Times building on 43rd Street.

The new, custom-built office will bring the next wave of great engineers and creative strategists to New York, according to a spokesman for the company, who said Collective was attracted by the building’s open floors and big windows, not to mention its high profile tenants.

“It’s a prestigious location with some big-name tech companies, such as Yahoo, also moving in,ˮ said the spokesman. “Collective chose the space because the area, and the building itself, is attracting more and more companies that work at the intersection of tech and media.

“It’s also just an ambitious commitment to growth — since it about doubles their office capacity, with an option to pick up an additional floor as well down the road.ˮ

Collective was repped by Cassidy Turley’s Richard Bernstein, Harry Krausman and Daniel Thompson. The leasing team from Newmark Grubb Knight Frank working for owner, Equity Office, has filled around 400,000 s/f in the building in the past two years, primarily with tech tenants.

Big fish, Yahoo! has leased 192,804 s/f for the long-term on the 9th through 14th floors. Mongo DB, Alpha Sights, and a division of IAC, also have space there.

Brent Ozarowski, senior managing director with NGKF who worked the Collective the deal with Brian Waterman, Lance Korman and Jonathan Tootell, said the high ceilings and unique character of the 100-year-old building that has been newly renovated have been a big draw for technology tenants.

“The location has also been a positive for us. It is so easy to get to and from every mode of transportation,ˮ said Ozarowski, noting that 90,000 s/f remains available for lease in the building.

Among that space are several pre-built lofts, the quality of which has already attracted new media firm, Say Media. “These are wide open, ready-to-go, cool, creative installations,ˮ said Ozarowski.

Asking rents in the building range from $69 psf in the base floors to $80 for the top two floors, and while Ozarowski said any tenant is welcome, it is likely the remaining space will also be filled by tech firms.

“The characteristics of the building, the location and the concentration of tenants we already have from the sector have all played a role in our leasing campaign and we are excited to welcome Collective to the tenant roster,” added Ozarowski.