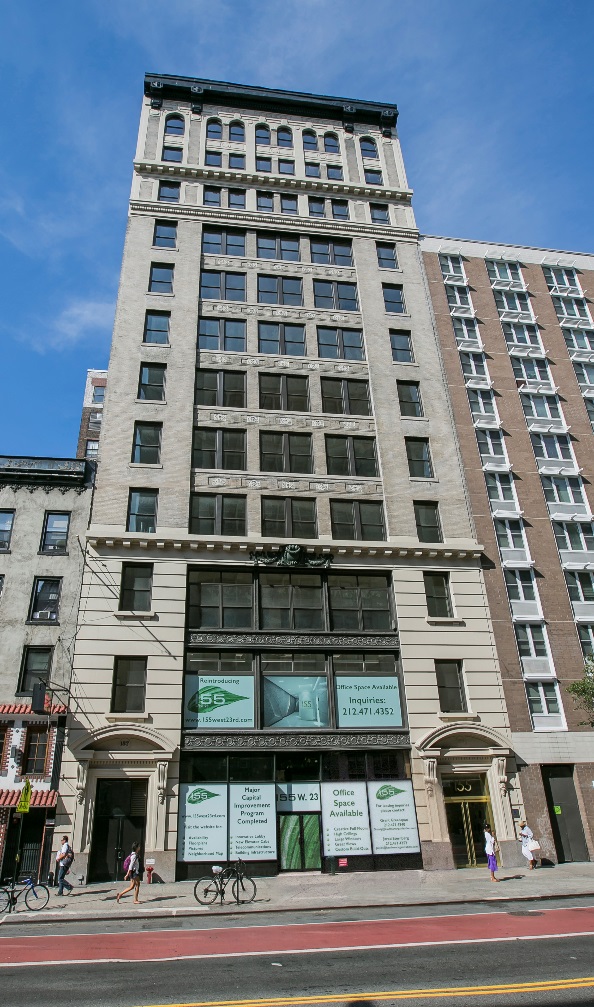 A leading analytics and marketing software firm has signed a full-floor lease in a recently renovated Midtown South office building.

With this latest commitment, Kaufman and Goldman Sachs have leased all but three floors in the 12-story building marketed as 155W23.

Together, the co-owners poured $10 million into a gut-renovation project at the property in 2017. It included the installation of new plumbing, electrical systems and high-grade fiber optic wiring.

“The property continues to attract a steady stream of diverse, innovative tenants and we are pleased with the robust leasing velocity we’ve experienced at the building,” Kaufman Principal Grant Greenspan said. “Infogroup is indicative of the evolving tenant demographics of Midtown South as an increasing number of creative and forward-thinking firms are finding value in the high quality, tech-forward, modern design and convenience of 155W23’s prebuilt spaces.”

Representing Fortune 100 companies such as eBay, Kenneth Cole, Hershey’s, Aetna, Allstate and Time, Inc., Infogroup is considered one of the leading business-to-business data marketing firms in the country.

The software-driven company puts together various digital marketing campaigns for its clients and provides customer service, data processing and risk management. It will use the space a 155 West 23rd Street as a sales office.

Midtown South—including Chelsea, the Flatiron District as well as the Madison Park and Union Square areas—has become one of the hottest office markets in the city in recent years. Its older, cheaper office stock performs well with startup businesses, especially those in the technology, advertising, marketing and information, or TAMI, sector as well as co-working/flexible office providers.

During the third quarter of this year, average asking rents in the area soared into the mid-$70s p/s/f, surpassing Midtown’s overall average of $72.65 p/s/f, according to a report from Cushman & Wakefield.
This summer also saw Vornado open 512 West 22nd Street in Chelsea, adding 172,000 s/f to the market—145,000 s/f of which is still available. On the opposite side of the district, Spaces, a co-working provider, gobbled up 100,000 s/f on Park Avenue, part of the 1.8 million s/f of new leasing last quarter.

Fostered in part by its plethora of public transportation options as well as a rush of new dining and shopping tenants has set off a race for landlords to improve their spaces and compete for companies.