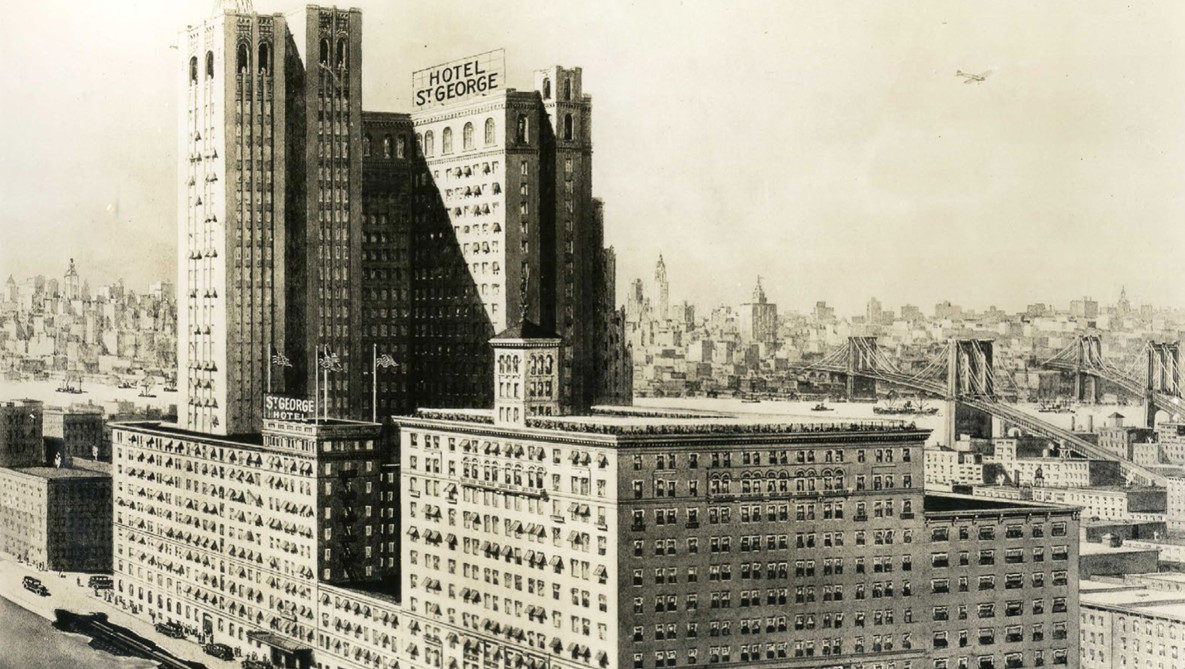 Katz Architecture brings some glamour back to the St. George

In a nod to its storied past as one of the grandest hotels in New York City, the St. George Tower in Brooklyn Heights recently completed a $1 million lobby renovation.

The project, designed by Katz Architecture, harked back to the building’s 1930s art-deco heyday.

The hotel was originally composed of a variety of structures constructed between 1885 and 1929, the last being a 30-story tower designed by Emory Roth.

The hotel enjoyed widespread notoriety into the 1960’s but as the area changed and venues in Manhattan gained greater popularity, the place gradually lost its luster and the buildings fell into disrepair. Over time, they were sold off for various uses.

By 1984, when the Emory Roth tower was converted to co-op apartments, the original hotel lobby and entry had already been parceled off to a separate developer.

As a result, the co-op lobby was relegated to a less desirable space originally built as the Hotel service entry. This, and the sponsor’s limited budget, resulted in a drab, multi-level space with quarry tile floors and sponge painted walls.

In recent years, as real estate values dramatically increased, the co-op board felt it was finally time to address the lobby.

When Katz Architecture was hired, they were asked both to correct the lobby deficiencies and to recapture some of the drama of the earlier Art-Deco glory days.

In addition to poorly worn finishes, the space was plagued with sub-standard lighting, problematic air conditioning, and an inadequate concierge desk. Another major difficulty was that the lobby was built on three levels: an entry concierge level, a lower service area accessed by a ramp, and an upper lobby area that contained the elevators and mail room.

Also important, there was no reference to the building’s storied history. Katz set out to bring back some of the classic elegance of the original era of the building without making it an Art Deco restoration.

With this in mind, finishes were chosen to create a contrast of dark and light while lighting was used to highlight shimmery materials and create drama — all thematic trends of the Deco period.

The ceiling of the main space is raised to increase the scale of the room. The concierge desk is relocated to the center of the space in front of a faceted aluminum-leaf and black plaster feature wall.

The new lobby design unites the two upper levels by opening up the stair while the ramp to the service area is concealed behind the central faceted feature wall.

A 5-foot diameter mica shade chandelier is suspended from the ceiling. Concealed LED lighting rakes the faceted aluminum-leaf feature wall from below.