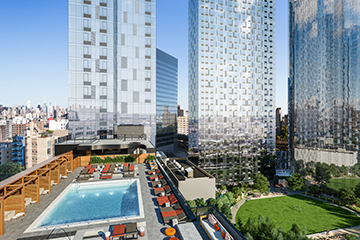 Jackson Park is offering up some green for the tech crowd that will be coming into the neighborhood.

In between the three buildings, the new development features a 1.6-acre park designed by HMWhite Landscape Architects.

In a neighborhood known for its industrial history that’s now evolved into residential development, the green space situated right above the LIRR terminal is a crucial respite from the concrete surroundings and offers a  wide look to inland Queens .

The centerpiece park also acts as a natural meetup point for the residential towers and is connected to several amenities, including a dog park that’s linked to a dog daycare and the bocce ball courts and outdoor ping-pong and shuffleboard tables right by the building’s consolidated amenity space.

“When you’re walking the streets of Long Island City and see somewhat limited green space, we can offer a two-acre private park,” Erik Rose, managing director of residential development at Tishman Speyer, said. “And when you compare us to every other property in this submarket, we really have the biggest collection of unique amenities under one roof.”

Besides the greenery, the other major feature of Jackson Park LIC is the 45,000 s/f of amenities that are wrapped up in The Club. The park connects to the first floor of The Club that’s equipped with a conference room, demo kitchen, game room, golf simulator, and billiards and foosball tables.

Residents can use the elevator or take the stairways, whose walls are wrapped with Keith Haring-inspired designs from interior designer, Clodagh .

On the second floor, The Club offers gym space designed by Jay Wright and his company The Wright Fit. The area offers a traditional gym layout but is stocked with modern devices such as Peloton bikes, a Pilates universal reformer and an area for group classes.

For residents looking to relax after a workout, the third floor features a spa, sauna, steam room, meditation lounges and a la carte massage services. Clodagh’s interior design theme of fire and water is emphasized with the 75-foot indoor lap pool that faces a wide-sweeping fireplace.

The Club’s fourth floor features full court basketball and volleyball with a separate squash court to the side. And on the fifth-floor rooftop, there is a hot tub and outdoor pool surrounded by cabanas and tables and a wet bar. And residents can access the Club either by walking through the park or with underground passageways from each tower.

The first residents of Jackson Park will get a complimentary Amazon Echo Show, a digital voice assistant with a screen, and a smart outlet to upgrade their residences. And the 120 penthouse units are equipped with smart home technology that includes Amazon Alexa and connections to outlets, light switches and thermostats.

Each of the towers also has their own rooftop called Skydecks that includes a roof terrace, party room, and children’s playrooms.

Tishman Speyer’s new project  aims to hit all three facets of the live-work-play model, with the work portion of the model across the street. The developer is also behind the JacX, an office development across the street from Jackson Park at Jackson Avenue. The office project offers 1.2 million s/f of office space split into two 26-story towers.

With Amazon constructing its HQ2 campus blocks away from Jackson Park, Rose expects the building to attract some of the expected tech crowd.

“The property appeals to everyone and certainly anyone who’s coming into the neighborhood, including Amazon, will be drawn to it because it’s a unique property,” Rose said. “It’s close to transportation if people want to get in and out of the city and it’s close to where they would work.”

He added that the design of Jackson Park was meant to accommodate those who were looking for somewhere to lay roots down to cultivate their lives. “The idea was to have people want to stay here longer than a few years in a place where they can grow,” Rose said. “By fostering the sense of community, you not only gain traction of people wanting to live here, but people wanting to stay and drawing their own friends and family wanting to live here as well.”

Studios start at $2,785, 1-beds go for at least $3,440, 2-beds will cost at least $4,610 and 3-beds start at $6,450. While one of the towers is complete and fully occupied,  construction is ongoing at the remaining two towers. Rose said construction would be complete by the first quarter of 2019 and expects full occupancy by the end of the year.