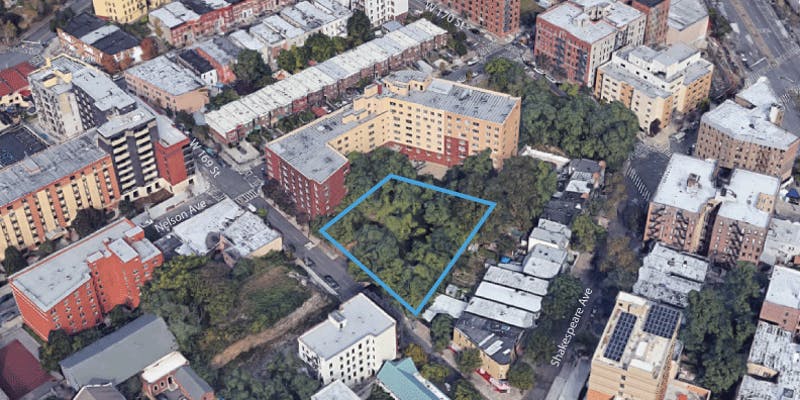 The city’s Department of Housing Preservation and Development announced the release of a Request for Proposals from qualified development teams to build high quality affordable homes for seniors at 97 West 169th Street in the Highbridge neighborhood of the Bronx.

The development site consists of a combined total of approximately 15,100 s/f across two adjacent tax lots.

The site is currently vacant and unimproved. This RFP will help advance the goals of “Seniors First,” a slate of new programs that the Administration introduced last year to double its commitment to senior housing over the extended 12-year Housing New York plan, serving 30,000 senior households by 2026.
“As we push to develop more of the City’s remaining sites for affordable housing, we continue to put seniors first,” said HPD Commissioner Maria Torres-Springer. “In seeking development plans for this vacant site, we are both making good on a key pillar of the Jerome Avenue Neighborhood Plan and our commitment to serve more of our city’s seniors through Housing New York.”

“Today’s announcement by HPD of a Request for Proposals for the first publicly owned site is a direct result of the Jerome Neighborhood Rezoning and I am extremely proud that this development site at 97 West 169th Street in Highbridge, will be 100% affordable housing for low income seniors,” said area councilmember Vanessa Gibson.

“Approximately 80-100 units for older adults ages 62 and older, coupled with social services through the city’s SARA program will provide long-term housing for our seniors.”

As part of its commitment under the 2017 Jerome Avenue Neighborhood Plan to increase the production of affordable housing in this part of the Bronx, the City invites developers, including non-profit entities and M/WBE firms, to submit proposals for the design, financing, construction, and operation of a new residential development on City-owned land. The site will be subject to a remainder interest agreement, which will cause the ownership of the land to revert back to City control unless it remains affordable in perpetuity.

As a part of Housing New York 2.0, the de Blasio administration’s accelerated and expanded plan to produce 300,000 affordable homes by 2026, the City launched Seniors First, a three-pronged strategy to reach more of the growing senior population. To date, the City has financed more than 6,500 senior homes. To advance the goals of Seniors First, in June 2018 the Administration agreed to prioritize two NYCHA sites and four additional City-owned sites over the next two years for 100% senior affordable housing projects, with a total development cost of approximately $500 million. The West 169th Street is one of the six development sites identified, and the winning submission will be financed through HPD’s Senior Affordable Rental Apartments (SARA) program.

Deadline for submission to the RFP is April 4, 2019. For more information and to obtain a copy of the RFP, please view the RFP webpage.